Judge Merrick Garland, President Biden’s nominee for attorney general, will commit to confronting “extremist attacks” in his opening statement for...

Jessica Watkins, an Oath Keeper charged with conspiring to storm the Capitol,

In the petition, Watkins alleged that while in a county jail in Ohio, she was stripped naked and left “in a cell with lights on 24 hours a day for 4 days in full view of everyone.”

what the actual f? that’s not okay to do to anyone. i guess by violating her civil rights they’re setting up a nice clear path to throwing out all charges.

Here we go. He owns you forever, Republicans. May he drag you all to hell.

House Minority Whip Steve Scalise (R-LA) on Sunday made clear that he stands by former President Trump as he took...

A member of the far-right Oath Keepers charged with rioting at the U.S. Capitol met with Secret Service agents before the siege and received a VIP pass to the rally where then-President Donald Trum…

Wanna bet that Secret Service person or persons is working for trump at Mar a Lago right now.

Is she claiming to have been paid?

"Watkins was present not as an insurrectionist, but to provide security to the speakers at the rally,” according to the filing.

The rally was held on the ellipse, not here.

Did they desert their client? 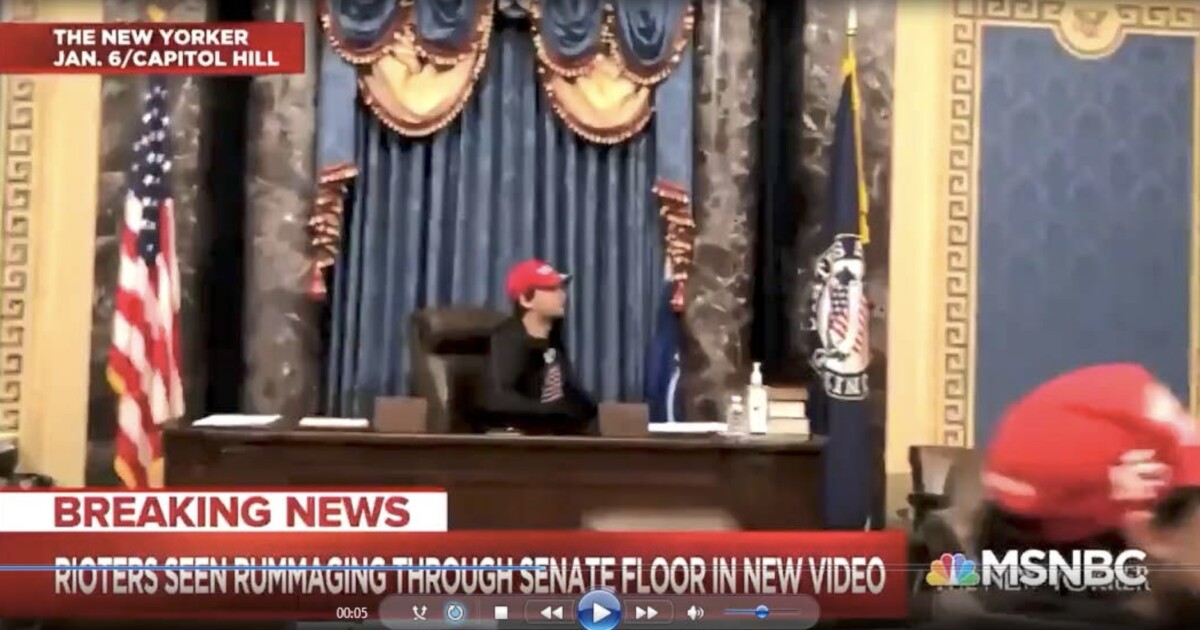 Christian Secor, who was charged with federal crimes for his alleged role in the Capitol riot, had stirred up tensions over free speech.

By “Secret Service” she meant an Uber driver who was secretly driving Lyft on the side. Totally innocent mistake.

A leader of the far-right group Oath Keepers who is charged with participating in the Jan. 6 riot at the U.S. Capitol reversed her story on Monday about having met with Secret Service agents in Washington on the day of the insurrection.

But in a filing on Monday, Watkins’ attorney said she had merely spoken with some agents while passing through a security checkpoint.
“Counsel in no way meant to imply that Ms. Watkins met with the Secret Service,” A.J. Kramer, Watkins’ court-appointed defense lawyer, wrote. “A better verb would have been ‘encountered.’"

AJ Kramer sounds like he’s overworked. A lawyer should help a client keep her story straight, but maybe a court appointed counsel is left to clean up the worst of the messes and hope for the best.

There's still a lot we don't know about the Jan. 6 riots. So we're suing the US Capitol Police for their inner workings to see what light it can shed on their response. And you can help. beta.documentcloud.org/documents/2049…
8 Likes
Ratel 24 February 2021 16:15 #966

Here we go. He owns you forever, Republicans. May he drag you all to hell.

Romney Says Trump Would Likely Win 2024 GOP Nom: 'He Has By Far The Largest...

Sen. Mitt Romney (R-UT) predicted on Tuesday that ex-President Donald Trump, impeached last month for inciting the assault on the...

Sen. Mitch McConnell indicated that he would be open to a commission narrowly focused on security on the Hill.

What are you afraid of Mitch? If 1/6 was perpetrated by progressives and or people of color the GOP would be planning on Benghazi x10000000.

Maybe Mittens is just trying to flatter Tromp into not splitting off and forming his own party.

(Narrator: it wasn’t actually weird at all.)

Thomas Webster, 54, dubbed "eye gouger" on social media for his grip on the officer's face, attacked "like a junkyard dog" in the Capitol riot, a prosecu...

Mittens has supposedly been meeting with other less insane conservatives about beating him to the punch. And the details sound a lot better thought out and practical than Team Well Done Steak.

Apparently expecting a small party and talking about using the cross endorsement strategy that works well for the Working Families Party. The idea being to side step primary challenges on the right, while cross endorsing where they don’t feel the need to directly challenge a candidate. With a side salad of deliberately bolstering the “moderate” wing of the DNC (ie Joe Manchin). The deeper scuttlebutt says that a lot of those major GOP donors currently cutting ties are on board.

I don’t know if he has the solid medium rare steak to pull the trigger though.

“He went there as an American citizen to protest, an event that was urged on by our former president — to protest an issue that Tom felt very strongly about,” attorney James Monroe, told the court. “That’s protecting the Constitution.”
The judge noted that until Jan. 6, Webster, a married father of three who owns a landscaping business, appeared to have a “proud and impressive record” as a public servant, according to the Times.

Why does that even matter, though? What does it matter how long you haven’t violently lunged at police officers (or anyone, really) and tried to gouge their eyes out?
Do they think maybe he was doing it…ironically? Because you know what they say…

(Also, I bet if they dug into his record as an officer they’d find some shady stuff.)