Baby trapped in car turns out to be realistic doll

So who gets to pay for the smashed window since there was no reason to break it?

The citizen, who should be grateful for having their property destroyed in the name of safety!

Also, as the parent of a small child, my guess is that it was insisted that the baby doll get to sit in the seat while parent and child went in to shop.

There was a reason.

Also, as the parent of a small child, my guess is that it was insisted that the baby doll get to sit in the seat while parent and child went in to shop.

That’s one possibility, but there’s also a whole subculture of adults who buy these ultra-realistic baby dolls and fuss over them as if they are real children.

Whichever the case, I think the lesson is “don’t leave a lifelike baby doll locked in a hot car if you don’t want people to react as if there’s a baby locked in your hot car.” Same goes for pointing ultra-realistic-but-non-functional-firearms at police officers.

Edit to add: BoingBoing did a feature on that subculture last March.

Photographer Jamie Diamond explored the deepest crevices of the uncanny valley of Reborn baby dolls and the adults who care for them.

And also: This is just the latest example of emergency responders breaking a window to rescue a hyper-realistic doll they mistook for a real baby. If you take one out in public, it’s best to assume other people will think it’s real until they have reason to believe otherwise.

I think there is a fair chance that the doll is not a child’s toy. Perhaps something much sadder.

Or, well, just any L shaped stick, given how things are going…

I would rather they leave their re-borns in the car than carry them around with them or push them around in prams or strollers. Seriously icky man, so gross.

Here in the Toronto area, that would be a great way to get away with using the HOV lane during rush hour (2 or more people required in the car, but babies count as a person). 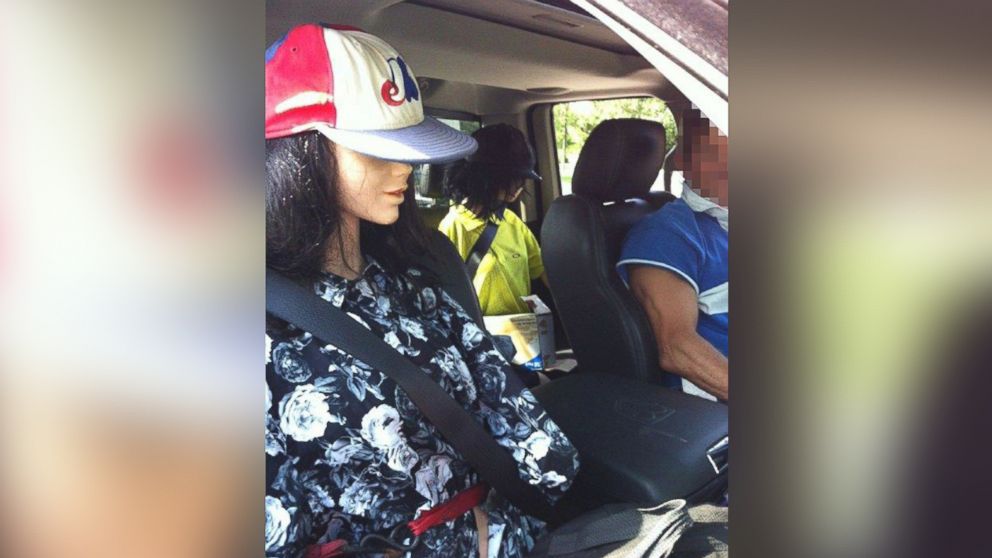 'Don't Be a Dummy': Driver Caught in HOV Lane With Mannequins

A driver in Toronto was ticketed after he was caught using the HOV lane with two mannequins as his passengers, according to police.

Here’s someone using a doll: A Randolph woman was issued a $50 fine for traveling in the carpool lane with a giant doll in the back seat.

That’s my guess. Babies also count for California carpools, too, which amuses me. It was probably the one time the person left it (or maybe fourth?), so karma if this is what happened ($450+ fine)?

I’m having a hard time finding fault with the emergency responders. They reacted exactly the way they were supposed to given that they had every reason to believe a child’s life was in imminent danger. It’s not like they freaked out over a Cabbage Patch Kid—those “re-born” dolls are freaky realistic.

That’s why you gotta spend the extra bit to get the hyperrealistic doll. “Shhh, officer, she’s sleeping”

I would rather they leave their re-borns in the car than carry them around with them or push them around in prams or strollers.

Just so long as they cover them with a blanket or leave them in the trunk so no passersby have reason to think there’s a baby baking to death. Unattended carseat baby on hot day = justifiable public freak-out.

Except it doesn’t have to be L-shaped. Or a stick.

You can’t do that! They’ll SUFFOCATE!

“Look, just because I made a hyper-realistic fake fire in the back row, there was no reason for everybody to freak out and cry ‘Fire!’ in a crowded theater!”

I know, right? I was walking along, minding my own business, with a clock and a bunch of pubes pink tubes and wires on my chest, and people freaked out because they thought it was a bomb! It was a hyper-realistic fake bomb. C’mon, people! If we can’t make mock objects that are visually identical to real objects and insist that people treat them as real objects when we want but mock objects at other, unspecified times – where have our freedoms gone?!!