Before Trump condemned post-election protests, he called on Americans to "fight like hell and stop this great and disgusting injustice"

Awesome! Alternet Universe Trump is even against the election of our Universe’s Trump. He’s giving us good advice. Let’s send our Trump to the Negative Zone!

Gad, he’s even a sore winner!

I predict they will both defeat each other and we will all win!

(hey, you gotta hang on to hope SOMEHOW) 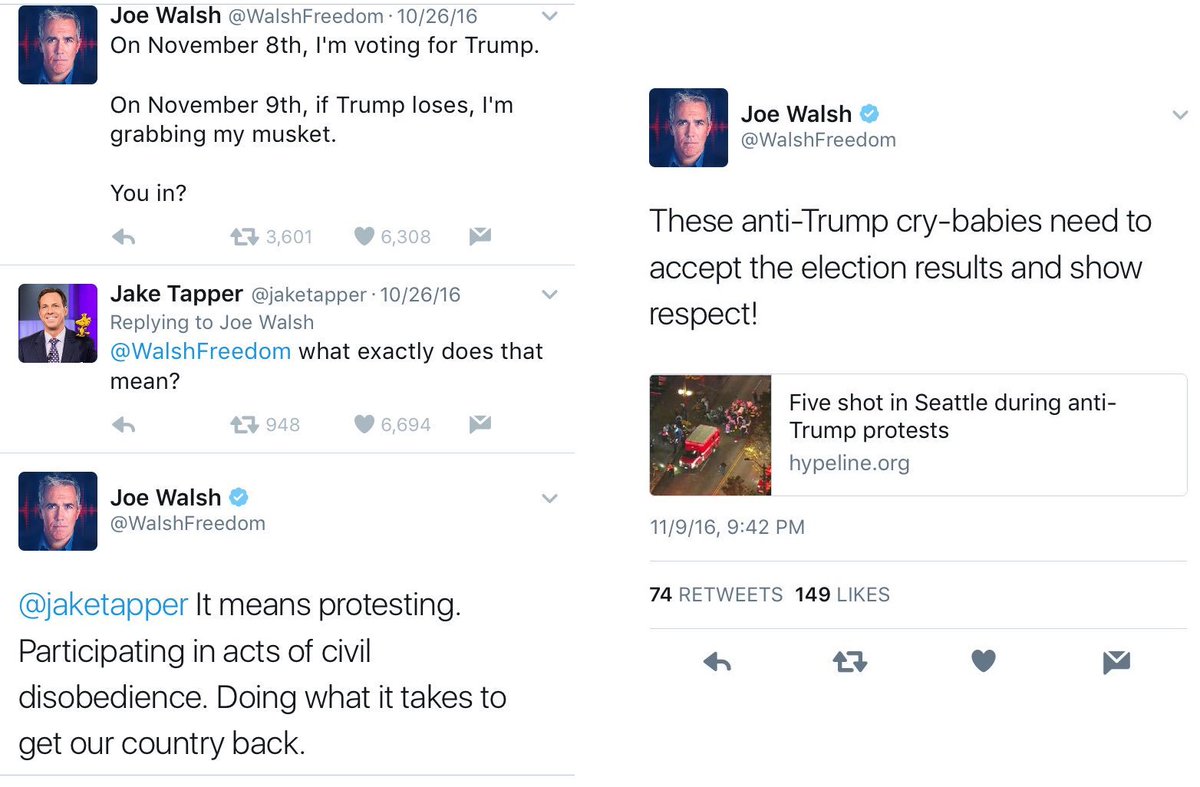 (and FWIW, that shooting in Seattle had nothing to do with the anti-Trump protest)

The great thing about technology is these kinds of opposing positions are immediately available for exposure and broadcast.

Someone needs to be keeping a searchable archive of everything Trump et al has said or tweeted so it can be immediately juxtaposed with every statement put forth from now on.

This shit needs to go viral every where, every time as a constant reminder to all what a fucking liar and con man they elected.

Grace and manners are not tRump’s strong points.

Grace and manners are not tRump’s strong points.

Would you be so kind and let us know what his strong points are again?

But they’ll make nice in the end.

Being an unmitigated, unrepentant asshole?

Would you be so kind and let us know what his strong points are again?

Well, there’s that weapon-mount hard-point on the top of the head…

If our trump sucks, does the alternate one blow?

Never Forget that Donald Trump Is a Profoundly Stupid Person

While there is every reason to fear the worst, and the names that have surfaced for roles in Donald Trump's cabinet have so far confirmed it, we may be able to take some small consolation in this: Donald Trump is...

Yeah, by 5 million. I guess Romney had more total votes on election night? If so, I’d totally forgotten. Sort of explains a weird conversation I had a while arguing with a conservative acquaintance a year ago. He decried the unfairness of the electoral college. Seemed odd to me because of George W. I guess there are probably still people that think Obama lost the popular vote. I’m sure it wouldn’t help FoxNew’s tyranny angle if their viewers knew the final totals.

I think you’ll find his supporters aren’t big sticklers when it comes to the issue of logical consistency.

M.A.M.O.N. (Monitor Against Mexicans Over Nationwide) is a satirical fantasy sci-fi shortfilm that explores with black humor and lots of VFX the outrageous consequences of Donald Trump´s plan of banning immigration and building an enormous wall on the Mexico - US border. By Ale Damiani

Facts are so last year.

Anyway, those ‘anti-Trump riots’ aren’t protests, they are works of performance art:

Woah a CRAIGSLIST POST what a SMOKING GUN. Must be the case because CLEARLY NOBODY IS UPSET WITH TRUMP and that kind of thing CAN’T BE FAKE.