Before Trump condemned post-election protests, he called on Americans to "fight like hell and stop this great and disgusting injustice"

Not to mention that it’s from before the election, so … canvassers? GOTV? lots of reasonable possibilities.

Yup, ‘Springprincess’ is from the Russian troll factory. No idea the age or gender.
So what?

These ads may still be on Craigslist if you care to check.

And Trump was definitely a ‘thing’ 16 days ago, even before the election! Imagine that. He didn’t just pop into existence on Nov. 7.
[edit]
Here’s another article about it. Purple. In case you were wondering what color flag to follow this time.

Wayne MADSEN: Defeated Democratic presidential candidate Hillary Rodham Clinton is not about to «go quietly into that good night». On the morning after her surprising and unanticipated defeat at the hands of Republican Party upstart Donald Trump,...

Apparently purple represents both of the corrupt, nearly defunct, traditional parties, both of which hate him.

Yes, yes. Nobody is upset. People would only be protesting if someone were funding it. It’s all normal and fits with established historical precedent.

He is the SI Unit of Orange.

Not true; in fact, the top echelon of Soviet information warriors feel your pain and (as they are Christian) are preparing some relief:

I am starting a charity focused exclusively on collecting Kleenex and diapers for Western establishment media. https://t.co/gcT52u8oHS 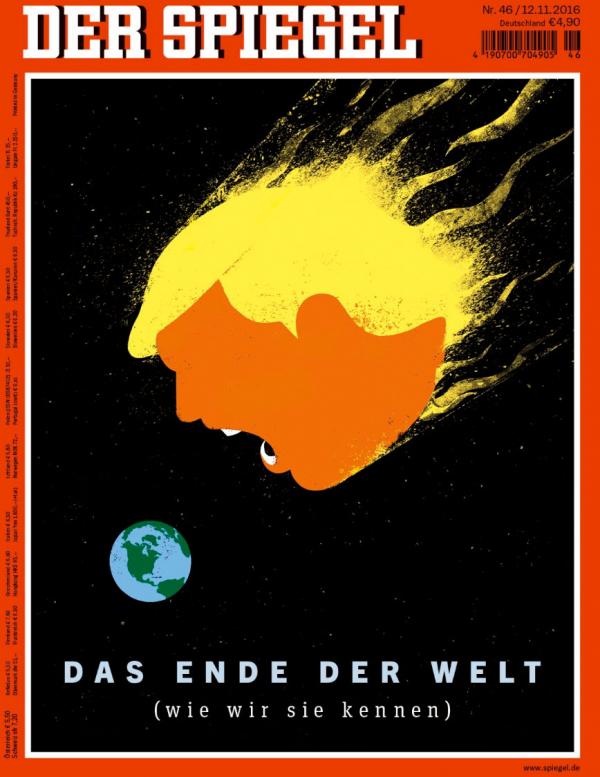 I don’t think that performance art pays that well.

Well, I assume that alternate universe tRump is actually a really great and awesome guy, so I’m rooting for him to show up through some sort of dimensional rift, defeat our tRump, and be an actually awesome president, leading the US to new levels of prosperity, support of Science, and unity between different racial, religious etc… groups.

The great thing about technology is these kinds of opposing positions are immediately available for exposure and broadcast.

To avoid the dimensional rifts and the attendant wear and tear on the space-time fabric, i propose instead a real-life remake of