Bernie Sanders is beating all of Obama's important 2008 records

Who is that and why are there birds flying around him?

I was half expecting you to respond with “42”, not sure this is any better though, lol!
(@milliefink asks it better than I.)

The only fly in the ointment is that Sanders is PEP --Progressive Except for Palestine. Activists were thrown out of a Sanders rally in Boston for displaying the below banner.
But I’ll still vote for him in the primary (sigh). 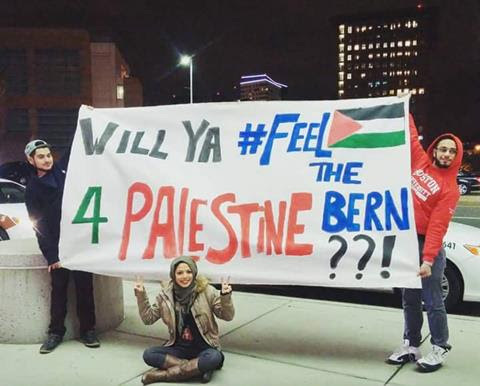 ‘We want him to speak up on Palestine’: Boston SJP statement on being kicked out...

On Saturday, October 3, members of Boston Students for Justice in Palestine were removed from a Bernie Sanders rally for holding a sign that read “Will Ya #feeltheBern 4 Palestine?”. The Sanders ca…

I look at Bernie and think “huh…another old white man, we don’t need any more of these” but then I listen to him and think, “He may be exactly what we need”.

All the serious candidates are.

It’s been nearly a decade. Campaigns are just better than they used to be. Largely because they’ve learned from, and duplicated Obama’s strategy. All sorts of stuff that was an innovation 8 years ago is now standard. At least in Democratic campaigns.

(Of course I don’t actually get funruly’s gif either, though it’s amusing, perhaps my meme detector is on the fritz.

Related in the USA: Bernie Sanders To Make Public Higher Ed Tuition Free I mean, we can and should keep informing and complaining about the problem, but perhaps it’s time for us to actually do something about it directly? Please donate to his campaign. It’d also be great if Boing Boing started covering Bernie Sanders more closely now. @frauenfelder @xeni @doctorow @jlw @Leigh_Alexander Do it for the planet.

That’s me directly after I met my wife, “SWOON”…

Except Mr. Sanders might actually be a real liberal, and not another Clinonesque (either one) crypto-liberal who actually represent the same people and issues as those on the far right. The only difference between most of the modern Democratic party and the Republicans are social issues (and even then those are so dilluted to be pretty much pointless). The Democratic party lost its spine long ago, and Mr. Sanders seems to be a good return to form.

Sanders is more like Kucinich, but with enough support that the media is forced to take him seriously (albiet very grudgingly).

This election is going to be very interesting.

Don’t give me this, both “parties are the same” stuff. There are massive differences in outcomes between red and blue states. You look at education, poverty, incomes, infant mortality, life expectancy, etc. in the blue states, and they look like other modern industrialized nations. Look at those same measures in the red states, and they look like the developing world.

Yes, there are good local and regional democrats, even a handful of good ones in national offices like the house and congress. But the higher up you go, the more watered down they get.

Look at Obama, his actions and policies not his words, how is he very different than anyone in the right center, outside of issues like abortion (not LGBT rights, since he pretty much sat on it until he was grudgingly forced to do something)? Look at most the the Democrats in Congress.

Please put a title tag on this one so folks not following the <a href=“https://bbs.boingboing.net/t/why-or-why-not-to-vote-for-bernie-sanders/59394"target=”_blank">why or why not vote for Bernie thread can see wha’s up.

The problem remains that Bernie is, as a self-avowed socialist, unelectable. That he’s a Democratic Socialist will be obscured by the persistent perception here (US) that Socialism = Soviet Union = commie pinkos.

People here would rather vote for an atheist than a socialist:

You might find this comforting, depending on how genuine you consider the response by his campaign, but they apologized and have said it was a mistake by the staffer who excluded the activists. (This is, of course, campaign damage control 101, but the Palestinian cause isn’t one that many American politicians would apologize for having offended.) 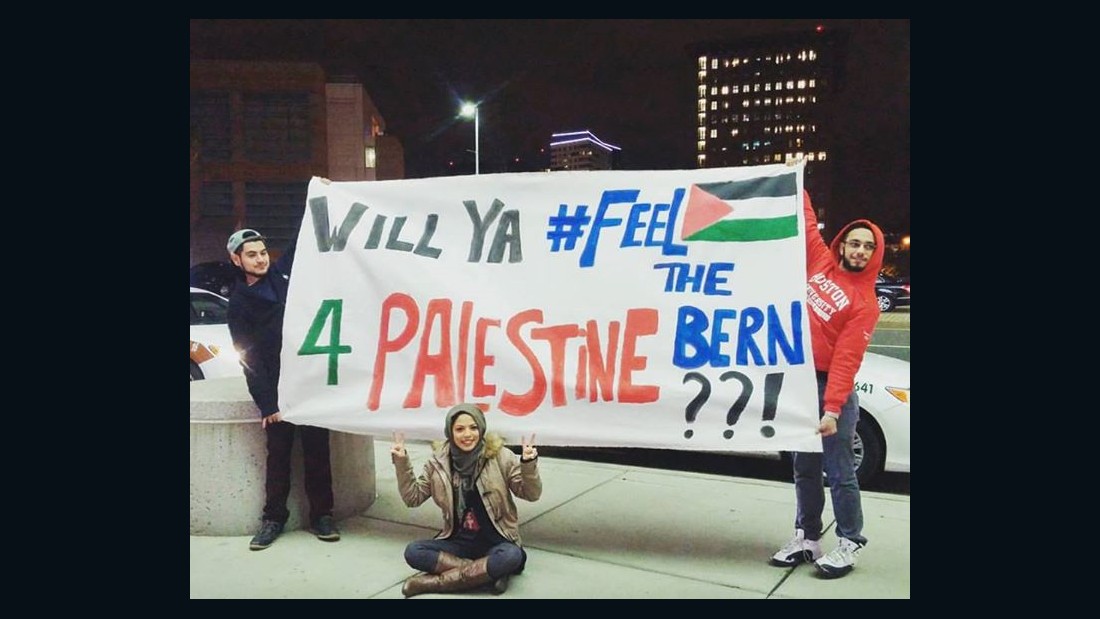 Cut that out. You know what they call a Republican who compromises? Unemployed. You think Democrats should be equally rigid? I disagree. Obama is a compromiser, and he’s gotten some amazing things done. He’s not pure enough for my liking, but success beats purity in my book.

If Sanders can deliver both, then let’s go! But honestly, I’ll be satisfied if he continues to not be Donald Trump.

Well, but isn’t Clinton relying more on corporate donors? The Sander’s campaign’s biggest large donors seem to be unions (which can have their own problems, of course), with the rest coming from more grassroots contributors.

But then there is the core problem of funding these massive campaigns anyway… why in the age of ubiquitous mass media, are we having to rely on so much $$$ in the first place? We absolutely need to address this issue, or it’s just going to continue to favor the rich and corporations over the rest of us. i think the question is who is looking to change this and who is just paying lip service to corporate money in campaigns being a problem.

Obama is a compromiser, and he’s gotten some amazing things done.

This is entering dangerous territory.

As far as I can tell, Obama hasn’t gotten much done, and much of what he’s gotten done has either been half-assed, or completely in favor of corporations, the security complex, and the 1%. Off all the issues on my personal check list, he basically hasn’t completed a single one. I knew this was going to happen the second he basically said everything Bush did was fine by him (sure, illegal wiretaps are bad, but not illegal enough to actually be worth it, and we don’t want to dissuade multibillion dollar corporations from breaking the law in future; sure torture is bad, but whatev, sure those Wall Street people did terrible things, but… shrug…).

Obama is business as usual. He speaks a mean game, but his actions say something different. And actions are all that matter. The War on Drugs is as strong as ever. We’re still being illegally spied on, with pride and gusto. We’re still killing innocent people in other countries. We still favor the rights of corporations over people (hey TPP!). We set back real public healthcare by a generation, and instead just get forced to funnel money to evil insurance companies for shitty service. We still have people illegally imprisoned in Guantanamo. We’re still randomly murdering people in other countries because “We’re AMERICA!”. We still don’t take global climate change seriously, or at least as seriously as big hydrocarbon’s bottom line. We still don’t give two shits about the enviroment. Education still cripples poor people with debt, but not as much as the misfortune of getting sick.

And I get that no president can fix all of these things, but they could AT LEAST attempt to do so. Obama hasn’t. Fixing many of these things are against his ideals (active, not stated). Compromise is great (unless, of course its on torture and human rights violations… which sadly were the first compromises Obama made), unless it makes you completely ineffectual.

Most of the progress made in his tenure has nothing to do with him. The economy went from horrible to just brutal for no reasons of Obama. We got our of two wars because, ironically, Bush. LGBT rights happened because culture got sick of Obama doing nothing. Actually, these are the only two changes I can actually think of (from a liberal perspective) that happened in the last 8 years. Everything is about the same as when Bush left.

Regardless of all of this; America needs a real liberal. Someone willing to crack some skulls. The Republicans aren’t scared of wearing their ideology on their sleeves, why should the Democrats be? If they can have Trump, why can’t we have an actual, honest-to-goodness, socialist?

Sorry, I got a bit heated there. Please don’t take it as a personal attack. These are nothing but my opinions, please take them as such, and not as any way me trying to say anything about you personally. Picture me as that obnoxious, semi-drunk, uncle you’re forced to put up with on holidays.

The problem remains that Bernie is, as a self-avowed socialist, unelectable.

In 2007, I heard people saying that it was too bad Barack Obama was black, because, no matter how much the grassroots liked his message, America was simply not going to nominate, let alone elect, a black man.

Indeed, many of Bernie’s most enthusiastic supporters were born after the fall of the Soviet Union, so they don’t have that old bugaboo embedded in their brains.

Times change, and an awful lot of people have seen democratic socialism at work in Europe, and they like a lot of what they see.

And of course, we now have a lot more experience with what unrestrained corporatism looks like, too, and even some older, once-fearful folks are beginning to see that there are worse things than socialism.

Honestly, I don’t think Bernie is unelectable, but I do think that one of his biggest current problems is people who would otherwise support him, but are convinced he can’t win.

The problem remains that Bernie is, as a self-avowed socialist, unelectable.

That must be why he’s spent 30 years in elected office.

well for one’ he’s jewish, and therefore whether or not he’s “white” is…a bit complicated. The Nazis certainly didn’t think his parents counted as white, that’s why they had to leave europe.

Bernie who? Is that crazy hair McGee?