Real attitude on that guy. Assume for a second he is innocent and all the allegations are false. What reasonable person would think that rape allegations from more than 10 women should be ignored and not even considered a topic of questioning?

What a change from the icon of my childhood.

If these allegations are true, my heart goes out to these women. I can’t imagine how terrifying it would be to be sexually assaulted, and then on top of that, deal with the knowledge that if you reported it (because it was perpetrated by a celebrity) your world would go even more upside down as the media dragged you over the coals, and dredged up every little minor mistake or indiscretion of your entire life. Wonderful that these women are now going to pursue justice, and I hope it inspires other sexual assault victims living in fear to seek justice themselves.

This is all tragic. Bill Cosby was a huge part of my pop-culture life growing up, and always outwardly represented such wonderful qualities. If he is guilty of these crimes, I hope he sees that he has one last chance to do something positive, and uses his celebrity to somehow bring to light that so many victims of sexual violence suffer alone, in fear of being shamed for asking for help or exposing the predator that victimized them.

I can’t really watch videos at work. Is there a transcript somewhere?

Going on the assumption for a moment that these allegations aren’t true; what would you do in the situation? I’m sure his lawyer told him to not speak, and I’m guessing that he would be totally overwhelmed by the allegations and media reaction, no to mention whatever psychological affects these (potentially) false accusations would have on him. He’s probably sick to death of the whole thing.

Obviously if the allegations are true, then its a whole 'nother ballgame. I really hope they aren’t true, its hard to reconcile the Bill Cosby in my head with the potential real Cosby. If they are… I have a oddly hard time stating what my reaction is… Outrage with a touch of inexplicable sadness. Which is odd, since for most rapists I read about its just plain anger and disgust. How odd the power of nostalgia and celebrity are.

Or ya know, wait til you get home. Are you getting paid to browse boingboing?

Some jobs are perfectly fine with employees browsing the web during down times. Others might allow it during breaks. Or lunch.

(Are you wasting leisure time making snide sounding presumptions about people on boingboing?)

Registered 25 minutes ago, and that was what Prince_Puffin decided was going to be his/her first comment. ::facepalm::

Are you getting paid to browse boingboing?

Are you doing it for free?

Is the art ever separable from the artist?

Not sure I can ever fully enjoy another Cosby thing, new or old.

This article goes into some detail about it (at least, I presume it’s the same AP interview - I also can’t watch videos at work).

Re: seeking justice? I’m not sure there’s any justice that can be sought, really. At least, not criminally, since the statute of limitations has long past (as far as I’m aware).

He comes across here as really pushy, in an arrogant and belittling sort of way. “If you had some integrity, you’d stop questioning me about what more and more women have been accusing me of.”

Sheesh. I bet he was a prototype for the negging PUA, back in the day. 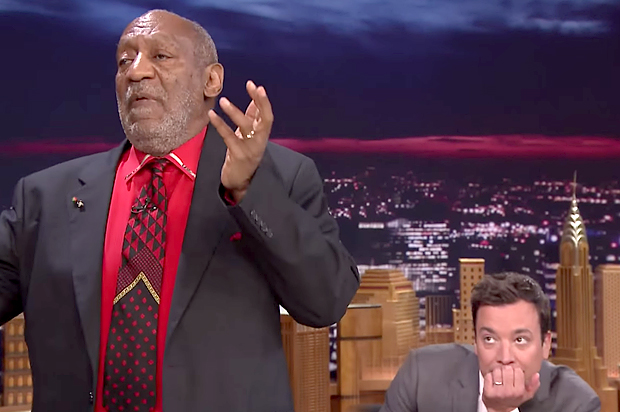 What I wish I’d asked Bill Cosby: How I learned that entertainment journalists...

Over the years, arts reporters gave Cosby a pass again and again. I know the template -- because I followed it VIDEO

I’m glad I never liked him. No childhood memories to be sullied here.

How open were these open secrets? I’d never heard anything about this until it all blew up recently.

Pisses me off that a la Savile, Rolf Harris et al, sod all happens until these guys are old or dead.

That is painful to listen to. The reporter doesn’t have the stones to stand up for himself, and Crosby is trying to push him around with all this “integrity” crap.

“If you have integrity you won’t publish a story saying I don’t have any,” is the message I am hearing.

Well I hope it isn’t true. But who knows. I grew up with him doing Picture Pages and Fat Albert. Love those shows. I found his stand up later and he was really funny back then.

Well, I guess I will do what I usually do - enjoy the art/works, not the man. Separate the art from the artist.

Wake up, boss. IF these allegations are true, then it’s more than likely Cosby is a sociopath, so fat chance getting him to “do something positive.” If these allegations are true, then he should be treated as any other rapist. Lock him up.
If these allegations are false, then the one positive thing Cosby could do is help other people that are falsely accused, such as supporting The Innocence Project, which helps exonerate falsely accused prisoners.
Sorry to shatter your Pollyanna world, but I’m not trying to be snarky or put you down. But c’mon. A rapist is a rapist. And given that we’re talking about a dozen allegations, over a long period of time, you actually expect him to “do something positive”? Stop trying to paste a conscience on a sociopath. It’s a fool’s errand.

If these allegations are true, then he should be treated as any other rapist. Lock him up.

Unfortunately, I don’t see that happening. I can’t see any prosecutor trying to pursue a criminal case against him without any evidence.

It’s not going to happen, as it seems like no one is doing this to press charges. Most of the stories are old, and the women didn’t report them likely because it’s their word against bill cosby. Can’t say I wouldn’t do the same thing in their position at the time.

I don’t think that’s what these women are neccessarily after either way — for some odd reason it took another comedian to call Cosby out to give these women a platform despite a few of them being vocal about it for quite some time. It seems like the message is “please be aware that this horrible thing happened to us, and if it happens to you report it right away” and then decide the rest for yourself.

Is the art ever separable from the artist?

Man, too often it has to be. Certainly an argument can be made that we should never enjoy anything by H.P. Lovecraft, Roman Polanski, Victor Salva, Elia Kazan, Errol Flynn, et al ad nauseum, but I defy anyone to keep an accurate and current database of Whom It’s Okay To Like Today.