BMW driver gets angry when car in front lets school bus turn in, then rams the bus

Just to be fair about one thing…He may have thought there were two lanes. Which ofc shows how much of an ass he is because you are not supposed to pass on the right. heh

Just to be fair about one thing…He may have thought there were two lanes. Which ofc shows how much of an ass he is because you are not supposed to pass on the right. heh

Well that’s what he said, but…At least around these parts if it had been a two lane ramp, there would have been two left turn lanes to enter it. So I don’t think that he was of the illusion that it was a two lane ramp so much as there was no physical barrier preventing him from passing on the shoulder and then merging.

And if this was his first offense, he probably won’t lose his license but it might well get suspended.

Here too. Mystified at that sort of thing.

Here’s another: the most egregiously parked cars, the ones on the verges, the ones creating new parking lines where they weren’t meant to be, the ones making themselves most vulnerable to passing side-swipes due to inconsiderate, selfish space-grabbing… these are almost invariably the cars upon whose gleaming metallic skins a minor scratch costs thousands to repair.

Yeah that is weird… I didn’t notice it at first, but he totally does. Even so, that dipshit should know better than to pass on the right. It is so strange and unfortunate that cars/driving just kind of turn us into beasts where we perform fits of rage that we would never perpetrate in a face-to-face situation… If someone honks at you or rides your tail, you have to work so hard to not respond in kind. You just get worked up into a frenzy. Animals.

The nicer models don’t even have turn signals to not use.

I nearly got in a wreck last weekend. Thank God I am a Ninja with cat like reflexes. This guy just starts coming into my lane. It wasn’t like he was cutting me off, he was coming into my lane with me still there. Had I done nothing I would have hit his (or hers) side on the front passenger door.

As it was, I slammed by brakes, locked up my tires, and honked my horn. Now had I heard all that commotion I would have gone back into my lane, or at the very least STOPPED coming into the other lane. Nope, kept on going. I was a bit pissed for a time. Fortunately no one was behind me and no one got hit.

In my area (NJ), for whatever reason it seems to be the Range Rover drivers who are the most obnoxious. I think Range Rovers are for snobby types who want something slightly less metal than a Hummer but more rugged and aggressive than a BMW.

If you look closely, the light had already turned yellow by the time the cam car came out of the underpass, and was just going red once it made it through the intersection. He may have been speeding up to avoid being caught blowing the light (too late) or, more likely, just to block the BMW driver from pulling in front. The light also accounts for the BMW losing his cool enough to try to pass him - “Not only did that guy hold me up just to put us both behind a school bus, he also made me miss the light!!!”

You know, people think that the BMW logo resembles propellers, in homage to their avation heritage.

This is not true. It’s a stylized puckered asshole.

I nearly got in a wreck last weekend. Thank God I am a Ninja with cat like reflexes. This guy just starts coming into my lane. It wasn’t like he was cutting me off, he was coming into my lane with me still there. Had I done nothing I would have hit his (or hers) side on the front passenger door.

I’m envious: this happens nearly every single time I drive. I’m so used to it I don’t even honk, just employ whatever evasive maneuvers and/or brakes are necessary to avoid the accident.

Oh dear, how sad, what a pity, never mind.

Well… at least the BMW driver seems to act as if he is the one at fault… at least as far as the “tape rolls”… I fully expected him to get out of his car and start yelling at the car with the dashcam… perhaps even slamming his fists on it… but he truly is acting as if he has no one to blame but himself. 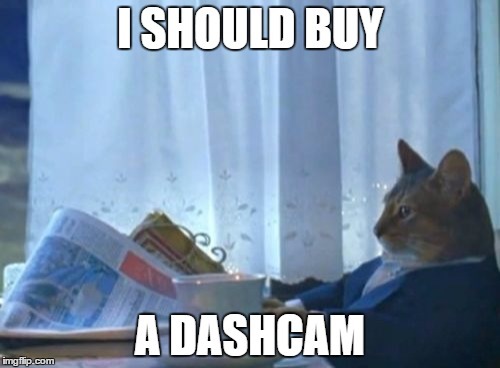 I like his sporty red sneakers. He just needed a backwards ball cap to complete the look.

If you ever feel like your life is wasted and pointless, remember that there are people whose job it is to install BMW turn signals.

as an aside, some of us will by 10+ year old Mercedes not because we have money or want to feel special. Quite the contrary, after 10 years the price drops significantly and you get a very solid reliable car at a good price. It’s simply good value.

It’s the Lexuses I always watch out for. Every damn time, it’s a Lexus.

As a tangent, did anyone else feel a frisson of something-vu when it turned out that the rear view wasn’t mirror-flipped?

A better value than a new one, perhaps. But even among BMW enthusiasts they admit the upkeep and repair costs are higher than many other cards out there. I think a 10 year old Honda or Toyota would be an even better value.