Gentleman crashes his Lamborghini 20 minutes after buying it

Sometimes they don’t even survive to the closing. 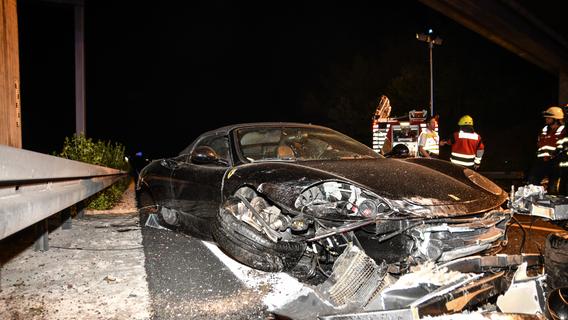 The German one was

If, as you state, @Carla_Sinclair, the car…

had “mechanical failure,” according to the BBC, and suddenly stopped on the road. It was then hit from behind by a van,

then it is entirely inaccurate to say the “gentleman” owner

Anyone following a vehicle should assume it may do an emergency stop at any time and it is the responsibility of drivers of vehicles behind to be maintaining enough distance to stop in time to not hit the car in front.

BB’s usual use of “gentleman” surely does not apply here, even if some may think anyone with the dosh and desire to own a Lamborghini is deserving of opprobrium.

The car was totaled. The driver of the van that ran into it did the totaling.

Oh, I see what you did there.

Just from anecdotal information I see on the webs, Lamborghinis seem to be real pieces of trash.

Even the ultra-rare Aventador-based Veneno and Centenario models are caught up in the 5900-strong recall. Read more at Car and Driver.

Yeah, change that headline. While I am all for making fun of fairly ridiculous over priced purchases…the reality is he didn’t “crash” from driving like an idiot…he was rear ended.

The rare time I feel bad for someone with a Lamborghini.

Disclaimer: I’m not a car guy.

Why in the hell would you shell out that much money for what is essentially a tool? If it gets you from point A to point B in comfort with enough room to drag along whatever (whoever) you need to then who cares what it looks like.

Buying a Lamborghini is like buying a gold-plated hammer complete with exotic lacewood handle hand carved by an artisan woodworker. Then using it to fix your roof.

Well, you’re not a roofer either. Nothing like the feel of a custom made lacewood handle on a hammer to drive in some nails… Especially the Australian variants. I agree with you on the gold-plating, though - that’s just nouveau-riche tacky.

Gentleman crashes his Lamborghini 20 minutes after buying it

The Lamborghini was hit from behind by a van after stopping in the outside lane because of a “mechanical failure”, West Yorkshire Police said.

That’s not “crashing your car.” That’s someone else crashing into it.

I agree with you on the gold-plating, though - that’s just nouveau-riche tacky.

Yeah, I would go for a harder metal. Maybe Titanium plating.

If it gets you from point A to point B in comfort with enough room to drag along whatever (whoever) you need to then who cares what it looks like.

Do you apply the same criteria to your home? And with Lambos it is not always only about what it looks like (some look utterly, crap some quite good), it is also about performance. Some tools perform differently from others. Still, I do tend to agree that anyone buying a Lambo probably has more money than sense, given how many do look crap and how many do break down with almost predictable frequency.

Do you apply the same criteria to your home?

Kind of. My backyard looks like crap because my wife and I both work full time and are now teachers for two kids. We could probably use a paint job but we’re new owners so we’re still in Housepoorland. I try to keep the exterior in decent shape but this whole pandemic has really re-sorted my priorities (especially with two young kiddos who need attention).

Edit: oh, and if I had money for a Lambo it would probably be used to buy new appliances, add a greenhouse for my green-thumb wife, and buy a new Subaru.

Came to say the same. I got rear ended by a (formerly) pretty fancy jaguar. Some damage to my outback. Jag guy got totaled, a tow and a nice ticket from the state patrol.

But I’m sure the house looks lovely enough indoors.

(Agree about the greenhouse and Subaru. Or Volvo.)

My sis just bought a Volvo and loves it but she lives in FL. I don’t know about rear-wheel drive in snow and haven’t looked into what Volvo is using nowadays. I like the Subaru symmetrical AWD.

haven’t looked into what Volvo is using nowadays

Front wheel drive for many models but their four wheel drives (several models) are typically 95% front and 5% rear which is dynamically altered when it detects conditions need a more balanced approach - i.e. slipping front wheels means more power gets pushed to rear. Hybrids may be different.

I feel the same way about a $20k watch. Does it tell time better than my Fitbit? Nope, it’s probably worse. Just like supercars - finicky, expensive, wasteful, and (mostly, IMO) pug-ugly.