Criminals - not the smartest lot, usually…

They are pretty much on track to become a true Bonnie & Clyde, from their repeated run-ins with the law to their ineptitude at crime to their taking ridiculous, incriminating photographs. Hopefully the similarities end there, before the killing starts.

One of my favorite West Wing quotes applies here:

FBI Agent Casper: In thirteen years with the Bureau, I’ve discovered that there’s no amount of money, manpower or knowledge that can equal the person you’re looking for being stupid.
President Bartlet: Some of the stupidest criminals in the world are working right here in America. I’ve always been very proud of that.

Snowcrash for the win!

This sort of thing just makes me sad now.

My 16-mo son loves to pretend that various things are a phone.

or putting them in his mouth presumably.

As I recall they try to put everything in their mouth at that age, too. Hmmm… I think you;re on to something. 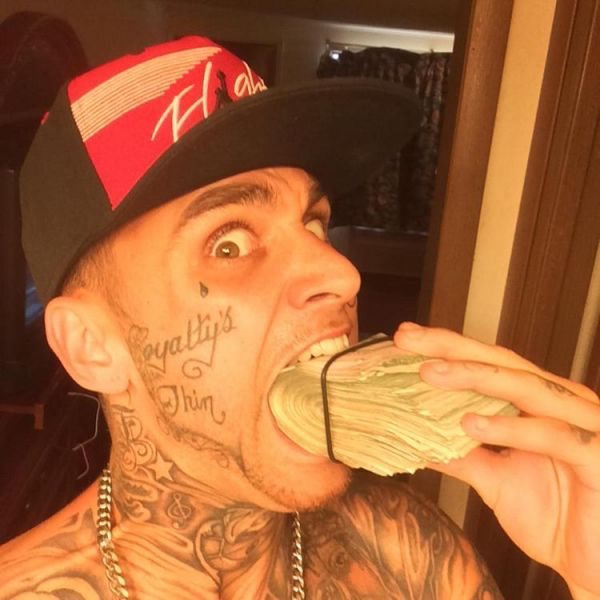 Give the babby a sharpie and he’d look somewhat similar, I’d guess…

This is total bullshit, he could have earned that money selling lots of drugs.

I often muse about the fact that humans as a species are capable of producing people that develop computer processors as well as specimens like these. It never fails to amaze me.

There are smart criminals, you just don’t notice!

At first I thought the one tattoo read “Royalty’s Chin”. I had no idea what that meant.

Somewhere in a dingy basement in Vietnam, small children are frantically sewing thousands of Sexy Dumb Bank Robber costumes for the American market.

Exactly. Smart criminals don’t rob the bank - they work there. More Goldman’s or a Hedge Fund than your local branch, 'natch. Really smart ones make their grifts legal.