Was she one of those “irresponsible gun owners” we keep hearing about every time someone dies in a gun accident?

Hmm, two years in the Navy (as an MP), ministered in a county jail. Clearly not a newbie to firearms. I guess her death will forever remain a mystery then, since we all know that guns aren’t inherently dangerous in and of themselves.

Clearly this could have been prevented if she had a second gun to shoot the first gun stored in her bra. More guns = more safe.

That’s one in the eye for the gun lobby.

A bra holster sounds like a weird idea to me, but regardless, how fucking stupid do you have to be to shoot yourself in the face with a gun in a holster? Did she put the gun in upside-down? 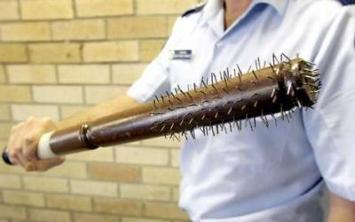 I can’t quite bring myself to laugh at what is a genuine unfortunate tragedy, but god, that really is a Daffy Duck way to go.

That’s one in the eye for the gun lobby.

Nah. They can spin this with their base no prob. Hell, most of them probably already think “broads” shouldn’t be packing. That’s a good ways down just one slippery slope.

I actually had to look this up to see if it’s a real thing. I really can’t understand the mentality of gun nuts who believe they have to be armed at all times. It must suck to live in constant fear like that.

A terrible tragedy and I sympathize with her family but honestly, who is really that surprised?

It’s fear that makes them what they are…

It must suck to live in constant fear like that.

I’d be living in constant fear too if there was a loaded firearm in my undies.

Honestly most of the people I know who I’d describe as “responsible” gun owners know that you don’t need to carry a gun, concealed or otherwise (and that its unsafe), that its stupid and unsafe to keep it loaded, especially with a bullet in the chamber, that you don’t pick up or handle a gun with out making sure the safety is on and stays on until your ready to fire, and that its deeply unsafe to handle or carry a gun in anyway that has it pointed at a living thing you don’t intend to put a bullet in right now.

Unfortunately this person is probably what most gun advocates would have, and do describe as a “responsible” or “good” gun owner. Right up until she shot herself in the face. At which point she magically transforms into an “irresponsible” gun owner by virtue of her being an embarrassing example. That whole market and political movement is driven by outright idiocy. Who the fuck needs a bra holster? That points a gun at your own face? And who they hell would put a ready to fire gun in it while its pointed at your own face.

Hey, it was good enough for Wyatt Earp.

A bra holster sounds like a weird idea to me

Lots of things are dangerous, but easy to handle safely. That doesn’t mean accidents don’t happen. Even things not typically seen as dangerous can kill you.

And how are some of these comments not victim blaming?

And how are some of these comments not victim blaming?

This is indeed a deeply un-classy thread to be having about a human’s death.

Right, because stereotyping millions of people as sexists due to what they own is awesome. I guess being a hypocrite is ok when it’s “those people”.