From [the Kickstarter comments] (https://www.kickstarter.com/projects/tmdesign/bomber-barrel-bag/comments):

And that’s just the first few. This goes on for pages and pages.

I wouldn’t recommend buying this.

I’m sure the TSA won’t bother to grope anyone carrying a “bomber bag”.

It’s a shitty little/big nylon shoulder bag ferkrissakes. How stupid do you think I am?

I have used zipper duffels for years, going back to a cheap canvas one in the '70s, and have never had an actual failure of hardware or stitching, although after years of use they eventually wear out. There seems to be a real quality problem here. The duffels from Mountain Equipment Co-op in Canada are built to survive Armageddon. Their site seems to be down right now, but the last time I checked a medium size (bigger than the one shown) costs about $45.00.

If you’re on the go, the portability, durability and versatility of slinging a good ol’ duffel over your shoulder can’t be beaten.

Maybe that’s the take of the cool kids these days, but it’s not mine. I spent my youth hauling around duffel bags. It wasn’t fun. I don’t miss them and my old man back has no desire to see them re-enter my life. At least not the big ones. But even for small things, I find that a backpack or messenger bag work better. Rarely do I find that a girthy sausage casing is the ideal shape for my purposes. The gym and the beach (basically, when towels are involved), are the rare exceptions. Even then, I find myself reaching for my backpack. I look in my closet and think to myself, “Why do I keep buying duffel bags? I hate using duffel bags!”

But to each their own.

MEC seems to be up for me. 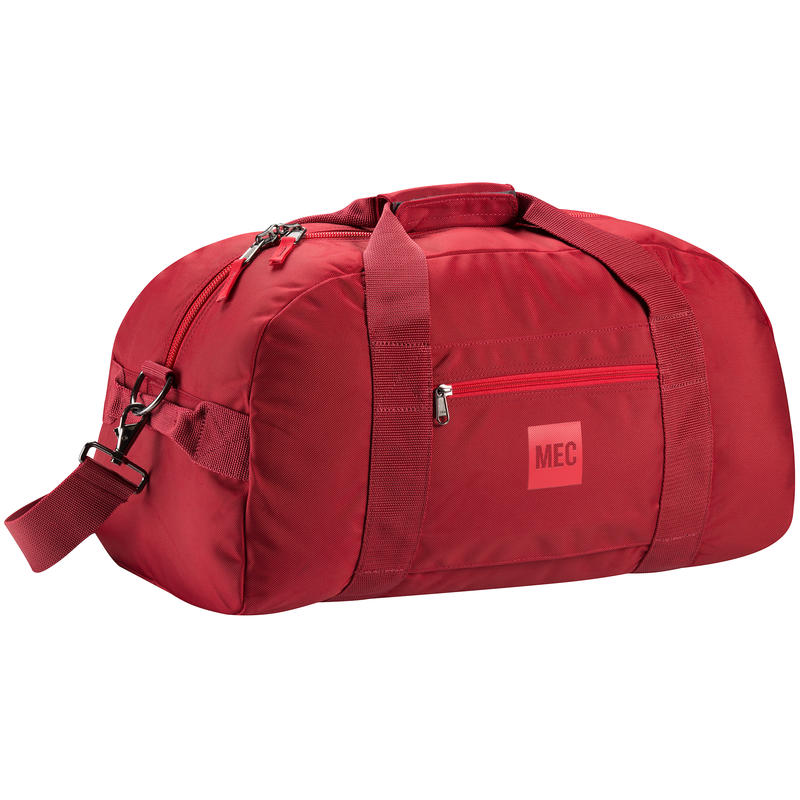 Shop for Duffle bags at MEC. FREE SHIPPING with $50 minimum purchase. Get inspired gear, informed advice, 100s of brands – all backed by our Rocksolid Guarantee.

Ok, ok. So you don’t want “the most funded bag on Kickstarter ever.” But what about that hoodie that disrupted the industry? I hear it’s finally available…

I’ve had a few Kickstarter things like this- where there were serious and profound quality problems.
A shame, really. At this point it’s mostly put me off the platform for soft goods.
Example: I got in on a pair of pants promised to last 25 years. That’s a big promise, but they looked pretty good, so… Anyway. Pants finally come (months after promised), and the stitching just falls out after a dozen or so wears. Nothing too strenuous, either- just office work. So, after much back-and-forth I send them back. I say for replacement, they say for repair/replacement. I get the “new” (new?) pair back two months later- only to have those fail after two wears, in almost exactly the same way.
What a joke.

Some folks around here popped into my backpack thread and recommended Tom Bihn. I bought one and haven’t looked back. Seriously worth the investment if you have the dough and don’t particularly need it to be a duffel. (I found it was better priced that spending money on new bags when the old ones failed after six months.)

Another option is army surplus if you really want a duffel. I hear they’re pretty good… but have no firsthand experience.

I get the “new” (new?) pair back two months later- only to have those fail after two wears, in almost exactly the same way.What a joke.

I don’t know. It sounds like you lucked into a pants subscription service to me.

Plenty of top loading duffel bags HAVE twin shoulder straps…Although for heavy loads a backpack really needs hip belt and a means to transfer load to it. Usually that’s external or internal frame, but sometimes a means of tightening the load into a solid mass is enough. Of course a frame can be broken by baggage handlers and can’t be put through the dryer when you get home to ensure that any arthropod hitchhikers are DEAD DEAD DEAD.

Not that my pants are literally shitty. That would be gross.

Like @Nylund, I rarely find that a duffel is good for heavy duty travel. A soft-sided travel bag with lots of structured pockets and zippable containers inside is much better than a formless sausage. That said, there’s one kind of duffel I love: foldable travel duffels. Lightweight, made of ripstop fabric, they fold down to tiny envelope-sized packages, hold your stuff when you need it, and cost about $10.

Pants finally come (months after promised), and the stitching just falls out after a dozen or so wears. Nothing too strenuous, either- just office work. So, after much back-and-forth I send them back. I say for replacement, they say for repair/replacement. I get the “new” (new?) pair back two months later- only to have those fail after two wears, in almost exactly the same way.What a joke.

That’s sad. Reminds me of when I bought my digital SLR camera. I got a camera bag to go with it. I can’t remember if it was free, or just really cheap a part of a package deal.

At any rate - I. Loved. It. It was a single strap kind, and just fit me perfectly. The pouches were perfectly sized and well thought out for what the average person would carry. It was amazing. I loved it.

That love lasted like exactly a week. I used it one time for a week long trip to Florida and it literally began to fall apart at the seams. It literally just fell apart after a week of being around my shoulder.

I was super sad. I didn’t call to replace it or anything because, like I said I got it either free or super cheap, and a replacement would likely have the same issues.

Though I have to wonder, how the hell does this happen? I mean how do you sew something and have the stitching fail after such short use? My sewing skills include moving a needle and thread in and out of buttons holes enough times that it won’t fall off and hand sewing a hat band. But, by god, both of those are still together. How would something sewn by a machine not hold together?

So: there are a couple of reasons I can think of:

A subscription to shitty pants

Another option is army surplus if you really want a duffel. I hear they’re pretty good… but have no firsthand experience.

I picked up one when I had to chaperone the kid and his classmates for a school camping trip. It rocks. You have to use the round end to get stuff in and out as you fold up the end over a hookthingy the proper name of which escapes me this morning. Not gonna be waterproof because of how it closes but sturdy as hell and easy to tote around.

These days I only go for RFID-shielded, ultra-strong duffels for carrying cash through dangerous territory.

Not sure I want a piece of luggage that I’d get arrested just for saying it’s name in an airport.
Hey! Whaddya got there?
It’s a bom…
Up against the wall!

Kickstarter’s most funded bag ever

Also, approximately as useful a metric as Patent Pending.