To be fair, it’s not a good song, but in these troubled times Ram Ranch is the song of the hour.

It illustrates well how these people are being grifted by the protest organizers, too.

A reminder of who the organisers are: 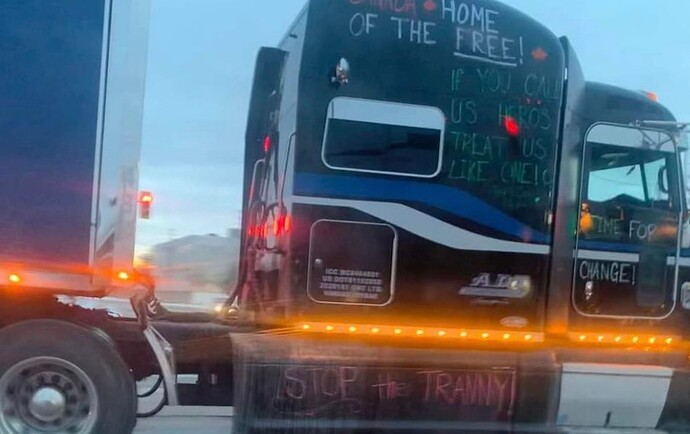 They say it is about truckers, and have raised over $5.5 million dollars on GoFundMe. But if you look at its organizers and promoters, you’ll find Islamophobia, antisemitism, racism, and incitements to violence.

That the Canadian government is taking them at their word and negotiating with these terrorists is shameful.

It’s an inspired choice, because cowboys are associated with values that the protesters hold dear like rugged individualism and freedom from government interference.

True, it’s no Willie or PD, but when Cowboys are Frequently Secretly Fond of Each Other that queer power can sometimes be enough to shut the jerkwads down 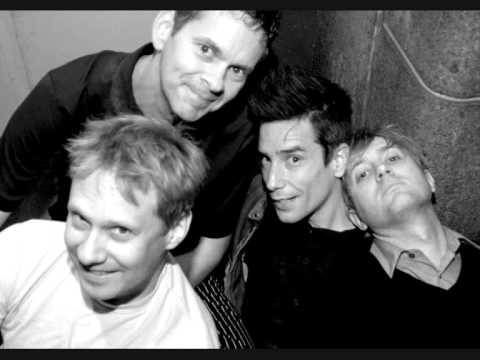 did the lead singer literally phone in his vocal track for that song? jesus.

This whole “freedom convoy” has been a real eye opener for me. I always thought of Canadians as super polite and mostly progressive people. Whe knew there were so many MAGA cult members amongst them?

As someone living in downtown Ottawa, the continuing epic trolling of their comms is a small ray of sunshine.

They aren’t negotiating with them, they’re trying to keep things from turning more violent than the low level local bullying and intimidation. Now that the Emergencies Act is activated, the various local and federal authorities can act with as much force as required to shut these grifters and their grifted suckers down.

They aren’t negotiating with them, they’re trying to keep things from turning more violent than the low level local bullying and intimidation.

I understand the distinction you’re making, but the only choice the terrorist organisers should have been given was “tell your followers to go home in the next 48 hours or you go to prison”. The low-level local bullying should have been handled by the local police as local crimes but they were by most accounts shockingly unprepared (and, given the sympathies of LEOs toward fascists, probably unsuited) for the job.

I hope this is a wake-up call for the Canadian authorities. The good news is that other cities like Toronto and Vancouver and Montreal learned quickly how to prevent the fascists from occupying and blockading their streets. The unsurprising bad news is that members of the federal Conservative party are still playing footsie with these terrorists.

Tuesday, you are my friend.

It’s a pretty small group of belligerent malcontents actually. 85% of Canadians are vaccinated, 90% of truckers. Politically speaking all they are likely to do is split the right wing in this country further, with some Conservatives shifting their support to the xenophobic People’s Party of Canada, which only received 5% of the popular vote last fall and didn’t elect a single MP, not even their leader Maxime Bernier. A divided right would just guarantee more Liberal governments in the future since the majority of Canadians are centrists/centre-left. There are some advantages to the parliamentary system. 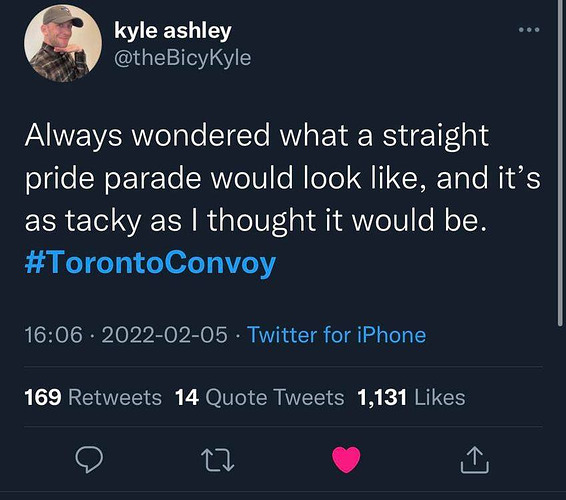 That the Canadian government is taking them at their word and negotiating with these terrorists is shameful.

The government is not really doing that, I don’t think. However the press have been. The Canadian press on this has been falling for what I would call The NPR Problem. They are still living in a world where both sides of the aisle are fairly reasonable and arguing in good faith, so are treating them as such. There’s a “fascism lag” if you will, and the both-sides-ism and regurgitating of right wing dog whistles (“It’s about vaccine choice!”) is making this “movement” of angry nut jobs seem larger and more legitimate than it is. If the press were showing them as they are- a small group of angry white men who spend too much time in American gun forums- this “movement” would quickly die out from the public shaming.

The big negative side effect of the press legitimizing them is that when the government (who see this for what it is- a fascist uprising) act against them, they look authoritarian in response. The press has a duty to show that strong condemnation of these people and legal action against them is the appropriate response, and not government squelching speech.

Whe knew there were so many MAGA cult members amongst them?

It is a very small group (as others have said, public trust in government and vaccination rates are very very high compared to the US) but it is disappointing how much of MAGAism has spilled north. It’s mostly coming from Alberta, which has slid to the right a fair bit in the past few years (largely as an existential fear reaction to the dying oil and gas industry, I think). Alberta has always leaned pretty far right (it’s the Texas of Canada) but cross-cultural contamination from US far right groups got a lot easier with the internet, and aggressive action to fight climate change in Canada (especially carbon taxes) has fueled the hate fires in that province.

All that said, the entire political spectrum in Canada is still basically left of Obama, so let’s not lose perspective here.

Ram Ranch! Catchy little tune but hard to hum along to it. I’d dedicate it to all the John Wayne wannabe’s and all those big bad truckers who’d like to be in a Peterbilt. Pathetic little man/boys pulled along by their puppet masters.

aggressive action to fight climate change in Canada (especially carbon taxes) has fueled the hate fires in that province.

The action has been anything but aggressive, at least at the federal level. After all, we are talking about a government that purchased a doomed oil pipeline project for billions in order to placate a landlocked petro-province. And the carbon tax, such as it is, is widely acknowledged as being too small and too slowly implemented to have a large impact.

The rhetoric from the Premier very much has been aggressive and that has trickled down to a lot of the Albertan public. This is chickens coming home to roost.

Kenney has been nothing but disaster for Alberta, from continually flip-flopping like a dying halibut over his government’s Covid response, to his shameful attempt to play both sides as the province’s most important U.S. border crossing is blockaded for a week. This from the guy responsible for passing a special ‘Critical Infrastructure Defence Act’ last year aimed at stopping First Nations blockades against natural gas pipeline expansion. Surprise surprise he hasn’t used it against a much more economically damaging blockade by angry white folk! Meanwhile the social democrat N.D.P. continue to climb in the polls; when they are elected next year redneck heads are going to explode. 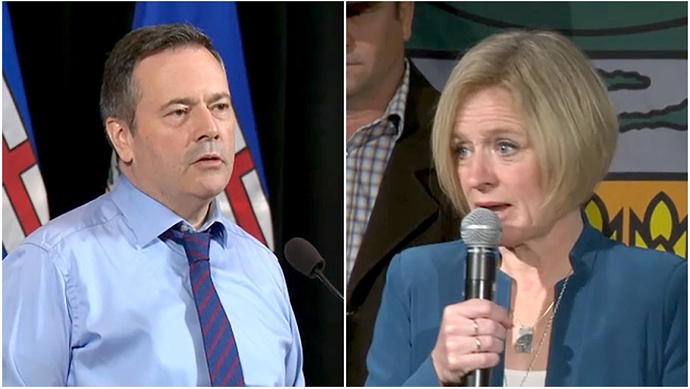 The Alberta NDP led by Rachel Notley continues to lead the ruling UCP led by Premier Jason Kenney in popularity among voters, according to polling data released Thursday by Angus Reid.