In politically polarized Argentina, progressive Peronists see Nordelta as the enclave of an upper class eager to exclude common people – and with tongue only partly in cheek, some have portrayed the capybaras as a rodent vanguard of the class struggle.

“My total support for the Peronist carpinchos of Nordelta recovering their habitat,” tweeted one internet wag.
…
Prominent ecologist Enrique Viale said it was a mistake to frame the rodent influx as an invasion. “It’s the other way round: Nordelta invaded the ecosystem of the carpinchos,” said Viale, who has been campaigning with many others for 10 years now for congress to pass a law to defend the wetlands from development. 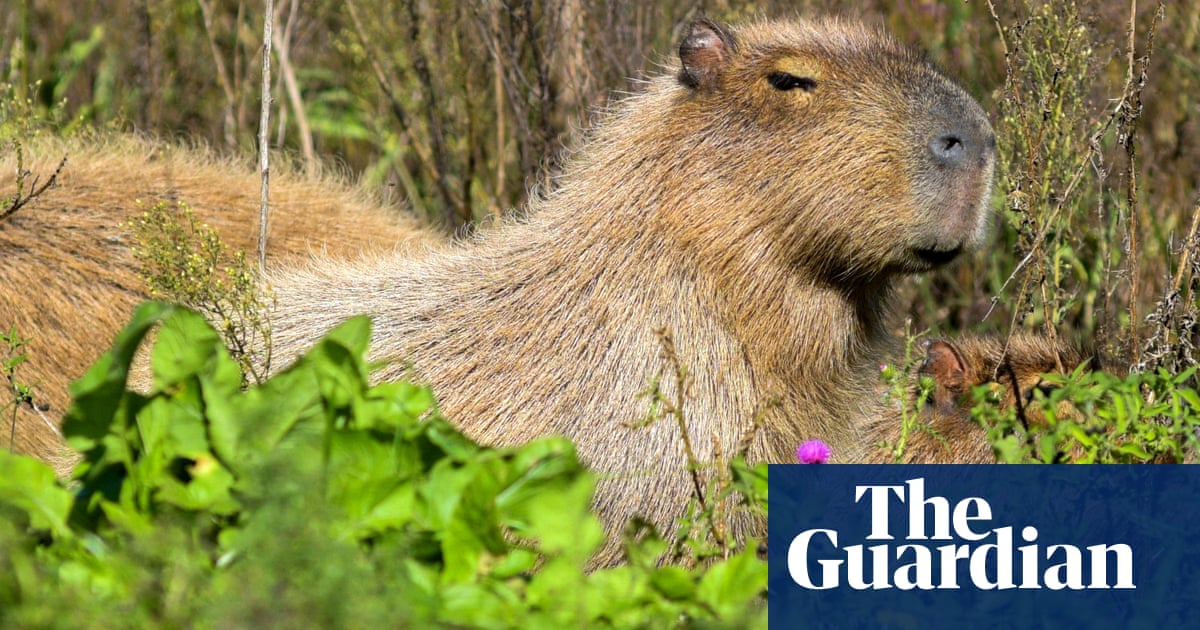 Attack of the giant rodents or class war? Argentina’s rich riled by new...

Hordes of capybaras have taken up residence at a gated community, sparking a debate on the environment and inequality

I got to say that “progressive Peronists” sounds… weird to me. Aren’t Peronists right-wing populists, to the point of flirting with fascism in the post-WW II period?

So, free range meat at your front door?? What is the problem?

On Friday, it can be free-range fish.

Sebastian Di Martino, a conservation director at the Rewilding Argentina Foundation, said the rodents were being driven into urban areas by the degradation of their wetland habitats.

So these folks moved into the Fire Swamp and now they’re complaining about the Rodents of Unusual Size.

I didn’t have any opinion on the residents of this area until just now. What kind of monster wouldn’t want to be surrounded by capybaras?

They look wonderful and cuddly; but, I bet they are scary in real life. Look at those gnashers!

As I understand it, they’re famously friendly and not just to humans:

The capybara is friends with everyone, including crocodiles, at least according to the Internet. This loveable creature is the largest rodent in the world, growing to a size of up to 134cm and weighing up to 66kg. Native to South America, capybara's...

I’m from Argentina and “Peronism” it’s a little more complicated than that because, well, all of Argentina’s political and sociocultural history is really caothic and complicated. The same goes for every country I suppose, but is specially strong in “underveloped” countries.

“Modern Peronism” (from Nestor Kirchner’s government on 2003 to present day, which is also widely called “Kirchnerism” even though they aren’t the same thing) has reemerged as a more progressist/pro human rights ideology, with somewhat of a socialist background. The oppositors, those who are really “the right wing” love to call that kind of policies “populism” as a way to downplay the vital role that has for a lot of people close to poverty that the state takes (or at least tries to) take care of you.

This neighbourhood has always been the example of ostentation and “new rich bad taste” and also it is well known that those areas (and a loooot of others in the country) had been developed as luxury neighbourhoods without taking ay consideration for the environmental impact.

Edit: Spelling. Also, I do my best writing in english, let me know if somethig doesn’t makes sense haha.

Put enough seasoning on it and any roasted mammal will taste good.

I don’t have first hand experience, but I know there have been efforts to convince more people to eat them. There have always been groups who hunt them for food and pelts in South America.

NO. Peron was a workers’ rights leader and Evita Peron went even further pushing for social change that would hopefully forever liberate the poor from the clutches of the rich landowning aristocracy on a continent that still had Feudalism until the 1960’s and where the conditions in industrial cities were Dickinsonian and still would be if they hadn’t forever changed the country with massive workers’ uprisings. The US made Peron into a bogeyman because, colonialism.

Evita: “The only thing a rich person will ever give you is more hunger” (against charity models of social services)
Peron: "Markets are never free; either the State controls them in favor of the people, or big corporations control them in detriment to them.

Often the confusion comes because in English “popular” means appealing to base sentiments. But in Latin America, where poor and working classes outnumber the middle and upper classes, “popular” means referring to the majority of everyday working people.

“Populist” governments are in favor of the working classes, and are despised by the wealthy, white, Bilingual elites that most US and Europeans meet. They call us all manner of racial epithets, dirty, unkempt, ‘negros de mierda’, ‘cabezas negras’, and in recent years, Kockroaches and Kakas (spelled with a K because of the Kirchnerists we support).

Obviously, the US and Great Briton were greatly inconvenienced by Peron and having to pay Argentines more than a pittance to suck the land and people dry. And colonists always, always mock national pride sentiment in their conquered people. Colonists cannot respect the people or the land they exploit - they’d feel like big jerks. And so colonists enjoy the company of the local middle managers who assure them of the inferiority of their compatriots. This continues today and can be studied under terms like “internalized colonialism”.

But when you meet a friendly, secular, English speaking Argentine on vacation in the most expensive countries on the planet, and they tell you that the peronists are fascists and evil, remember that they think this because of things like having to declare their income and pay taxes. It’s the same deal as when the Republicans call Biden a Stalinist.

The catch with colonialism is that many colonized people identify so completely with their conquerors that they wholeheartedly support YOUR advancements while feeling embarrased and disgusted by their neighbors raising their heads up- so they loved Obama and hate Trump. But then, back home, they vote for the Trump-Bolsonaro Aligned right wing. Platforms matter less than skin color and ‘might makes right’.

In the 60s there was some tension between the labor union peronists and the young socialist revolutionary peronists (it was the 60s; the kids of factory workers had gone to college) which got bloody and ended up eroding their power until the right wing military leaders took over via a coup.
Then again in the 80s and 90s (right when the fiscally right wing but socially centrist Clintons were coming into power) there was a long and infamous presidency by a neoliberal Peronist who did privatizations of state run utilities and transportation, as was the fashion worldwide at the time, but he was socially center left and promoted progress, especially in terms of women’s rights.
While there are rural conservative regions with long standing Peronist rule but fairly Manchin-like conservatives in power, the Peronists have always been to the left of any other party who ever achieved a presidency or parliamentary majority in Argentina.

they are scary in real life.

Not at all! Capybaras “Carpinchos” in Spanish, are a friend to all animals and people. In fact, it is very rare for one to attack a child or house pet. Much less dangerous than dogs and cats.

The Nordelta situation is rare - those are the carpincho’s habitats which in recent decades have been drained and turned into country clubs. But, the biggest river and wetland system in the region is having a historic low water level, so perhaps that’s why more and more carpinchos are coming down towards buenos aires. Another compounding effect is that the country clubs pushed larger predatory species, so there are more carpinchos on less swamp.
[EDIT: forgot to mention another issue is that these Country Clubs are notorious for ‘seeding’ their neighborhoods with deer and carpinchos when they’re selling units, to make things look more ‘nature-y’. So one biologist consulted by the local newspaper mentioned that since carpinchos are family groups, they can’t go where other groups already are, leading them to seek new territory.]
Video blurb translation:
"Nordelta Country Club people: “Help! The carpinchos are eating my plants!”
Corrientes people (a poor rural region in Northern Argentina):

seems like aside from the awful animal attacks, the worst thing about them is their numbers and sheer quantity of poop they produce. the residents needs to start making lemonade from this, and start composting capybara poop and selling it.

The US made Peron into a bogeyman because, colonialism.

Well, being a Nazi sympathizer and inviting all manner of war criminals to the country didn’t endear him to the US.

Interestingly enough he brought over German aircraft designers who got to create jet designs that never made it into WWII.

Well, being a Nazi sympathizer and inviting all manner of war criminals to the country didn’t endear him to the US.

Operation Paperclip was a secret United States intelligence program in which more than 1,600 German scientists, engineers, and technicians were taken from former Nazi Germany to the U.S. for government employment after the end of World War II in Europe, between 1945 and 1959. Conducted by the Joint Intelligence Objectives Agency (JIOA), it was largely carried out by special agents of the U.S. Army's Counterintelligence Corps (CIC). Many of these personnel were former members, and some were form...

I’ll pray for you too.

But the difference being the US was far more hypocritical and secret about it. /s

Plus our Nazi war criminals generally had some non-nazi related utility. As opposed to people like Eichmann, Mengele and the like, who were just mass murderers.

But in all fairness the attempt to recruit former Nazi intelligence operatives to work against Communists was a complete and utter failure. The Soviets and East Germans ran rings around them.