Roiland voices the main characters and Cartoon Network is on the contractual hook for dozens more episodes. Good luck!

Oh I’m sure there are dozens of voice actors who can pull of the annoying and grating voices of the main characters… the problem with be when you get the inevitable backlash for dude-bros mad that Roiland got “unfairly” shit-canned for his actions. They’ll rally around, and whinge until Cartoon Network gives in…

At least if the recent shit with M&Ms is any example to go by.

I like Rick and Morty a lot but am not one of the show’s notoriously toxic fanbois. If Cartoon Network is sacrificing this immensly popular cash cow so abruptly I can only speculate that the incident in question was particularly bad even by the standards of domestic assault and/or that they investigated him further and found out about other incidents.

Disappointing news, in any case.

To be fair, they went to some some lengths to distance themselves from the toxic elements of the fanbase, even calling them out in recent episodes of the show itself. It’s too bad that a good show was involved with a guy like Roland. Hopefully this doesn’t cause any splash damage to Dan Harmon.

Also, I hope that poor woman gets to stay anonymous as long as possible. She’s about to be the new target for their misogynist bullshit.

I am relieved to see Cartoon Network do the right thing here. I can’t see myself watching new episodes starring Roiland now that I know what I now know.

It is a fun show, and I do hope that it will go on with new voice actors (as CN is indicating). The way the show is set up and written, it shouldn’t be much of a problem to explain away the new voices. Hell, half of the show is explaining away stuff like that.

“Can somebody get AI Voice Over dot com on the line?” 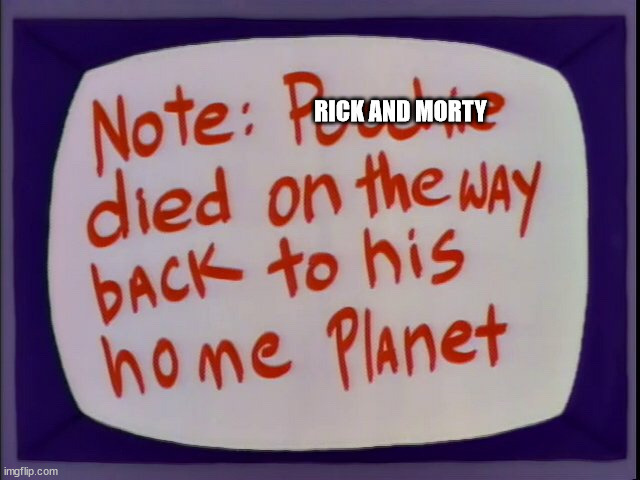 I’m actually being half serious here. Don’t even try to reproduce their voices. Just have Beth and Summer looking for them. Anything you do is going to piss off the rabid fanbase, so go all the way and make it female led.

I reckon that given the quality money printing machine they have in Rick and Morty, it would take a lot more than allegations to cause [AS] to disrupt the ship.

That Roiland resigned from the game company he founded, named after his joke, and heavily relying on his art style… well, I suspect that’s pretty telling about the seriousness/veracity of the allegations.

They’ll rally around, and whinge until Cartoon Network gives in…

Maybe not - I’ve heard the real reason why he might have been dropped is because of revelations he’s been grooming teenage girls online… (Unsurprisingly, toxic guy is toxic on multiple levels…) Cartoon Network seemingly want to be well shot of him before the full story comes out.

He’s proven himself a shit human and other shit humans will crop up to defend his honor, and because we live in a shitty world where women are not valued, then he’ll get his rehabilitation arc and be welcomed back into the fold of the entertainment industry… Because no one gives a shit about women being beat and teen girls being groomed.

Oh yeah, certain people are definitely going to defend him regardless of what comes out, I just mean I don’t think Cartoon Network are going to be too eager to take him back…

Whether he does or whether he doesn’t women everywhere will be blamed and punished for it too! Several of the teens names and faces are already all over the internet of course…

Never watched the show not gonna start bc why would I anyway if I haven’t by now…there’s lots of shows.

I’ve never watched Rick and Morty but from its online fandom it doesn’t surprise me in the least bit to learn that its co-creator is accused of beating up his girlfriend and that Cartoon Network has had enough.

I mean, there a lot of people who enjoy outrageous, surreal humor that aren’t raging assholes.

Well, fuck Roiland. It appears he is a POS.

As for the show, IIRC the last time Roiland did any direct writing for the show was Season 3, and even then, the show has always mainly featured other writers and directors. (Including Scud creator Rob Schrab writing a couple episodes!) So they don’t NEED him on the show at all.

I can do a decent Rick and Morty. I am sure there are other voice artists who could do a very good job replacing him for Rick and Morty, as well as the side characters. I mean, would Adult Swim be crazy enough to let people send videos to audition? Nationwide talent search? Live the dream as a voice over actor?

Even if they weren’t exactly the same, you could easily fix this in universe.

“Aw geeze, Rick, that tasted like shit. Wait, what happened to my voice?”

“It’s inter-dimensional Scope, Morty. It will give you fresh breath that lasts for a week, but if you swallow some, it instantly and permanently alters your voice.”

“What? Why, Rick? Why did you have me drink this?”

“It’s your voice, Morty. It’s so annoying. I though you would grow out of it, but its been like 10 years of this middling “will it/won’t it” change. How long can one person go through early puberty?”

“Wait, why is your voice different?”

“I, uh, got confused which flask had the Scope in it.”

I think I watched one episode once a few years ago trying to see what the hype was about and very quickly decided it wasn’t for me. I didn’t find anything particularly offensive about the show, I just didn’t care for it.

I was wondering why it took so long for Cartoon Network to sever ties with this guy if the domestic violence incident in question occurred back in 2020, but then I saw the comments here about online grooming. So I guess that makes sense, although I would have hoped beating the shit out of your girlfriend would have been enough of a reason to cut ties sooner. So I’m not particularly inclined to applaud Cartoon Network too much just yet.

Also, while I do not know the details of why, the charges did not really become public knowledge until an NBC News article a couple of weeks ago.

I could see them pausing the relationship pending the outcome of the trial, but severing it now does suggest they know that Justin Roiland is a huge tar pit problem and they need to open up the distance immediately.

If they know something, then I wonder when they knew it?

One interesting possible solution could be to actually make a machine-learning model of Roiland’s voice from all of his previous Rick and Morty work, have a new actor act out the roles and then have that voice model applied to the performance of the new actor. This is well within modern technology’s reach. For example, this entirely fake but very real sounding clip, walked through by the guy who made it: Joe Rogan on AI Artstation Boycott - YouTube

That said, I don’t expect that. That could lead to all sorts of legal issues about whether or not Roiland owns the copyright to his own voice based on performances from that show, etc.

I expect we’ll see a new performer mimicking Roiland’s take on the main characters, combined with the show’s actual twist for why their voices have changed. The show itself, like a lot of Dan Harmon’s work, has already had a pretty fun way of working with the fourth wall. I’m expecting Harmon will take this change on, and make it grist for new and further creative exploration. He has shown a knack for that.

I expect instead we’ll see a new performer mimicking Roiland’s take on the main characters, combined with the show’s actual twist for why the voices have changed.

They might not even need to go that far. A lot of these voice actors are, by necessity or just as a side effect of their profession, very talented mimics. I remember listening to the commentary on Futurama episodes (and a lot of those actors have done voices on Rick and Morty), and the voice actors were doing uncanny impersonations of each other’s characters from the show.

True. I do think the difference will be noticeable over the long haul. But it might not be so significant. It could end up being similar to the difference between the different actors playing Samantha’s same husband on Bewitched.