Hillary is a nasty woman. She’s made of steel. She sat through how many hours of grilling when being questioned about Benghazi? (11? I think) without even a flinch.
It’s going to take a lot more than what Trump could possibly throw at her to even come close to actually upsetting her.
Trump is a tool. His digs aren’t funny or clever, they’re blunt. Like him.

Catholics sweating in the proximity of a sexual predator. Imagine that.

I blame Vatican II. Boos used to sound classier back when they were all in Latin.

Somebody tell Rudy Guliani to smile.

Somebody tell Rudy Guliani to smile.

This was my favorite:

That would crack the vintage patina and reduce the value.

ETA - also he tells you when to smile, not the other way around. (It’s at the end.) 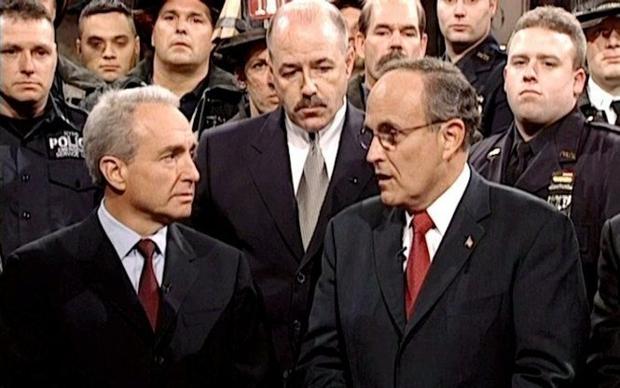 Less than three weeks after the terrorist attacks on New York City, "Saturday Night Live" returned to the airwaves for the start of its 28th season.

Trump stayed true to himself – was doing great at first, but then couldn’t contain himself any longer and unraveled rather quickly.

it’s that cheap Russian Cocaine, it wares off too fast.

I guess he didn’t go over bigly. It’s just the wrong venue for Trump. He should have scheduled to speak at the Alfred E. Neuman Foundation.

He said “she is so corrupt…” like it was the setup for a great laugh line and then just stopped as if he was expecting applause. He is so used to playing to his own base now that he has no idea how to address a general audience anymore.

I don’t get how Catholics could still support Trump. According to my relatives, it’s because Clinton is Anti-Catholic (a leaked email from a staffer implied Republican Catholics are deluded), but this dude insulted the Pope.

Chickens and roosts, and all that…

That’s so disappointing. John McCain killed at that thing in 2008.

I thought the joke about Melania’s speech was hilarious. But also revealing how he made her stand up, it reminded me of the time he made Chris Christie the butt of his oreo joke. He can’t actually laugh at himself, so he has to pick on someone close to him instead.

Also, that cleavage in the red dress, the camera made it a star what with her head being out of frame so much.

Was trump self deprecating at all? His only really funny joke was the Michelle-Milana (sp?) one, and that was at the expense of his wife, not himself. And he even managed to blow that by explaining the joke when everyone was already laughing.

Your relatives are just looking for an excuse, that leaked email came out about a week ago. Its not like they suddenly switched to Trump when it came out.

Nailed it. He utterly is lost without his moronic sycophants cheering when he breaks wind.

That’s not sweat, that’s the sheen of an ill-advised facial peel.