"Claque": how Trump revived the ancient practice of paid applauders

Simone Giertz could make lots of money by building applause machines and selling them to Trump.

Digby has a nice piece on this too.

"Trump is actually reviving a very old tradition — the tradition of the claque. A claque is a group of people whose job is to generate applause. In the description of the 1911 Encyclopedia Britannica, a claque is:

an organized body of professional applauders in the French theatres. The hiring of persons to applaud dramatic performances was common in classical times, and the emperor Nero, when he acted, had his performance greeted by an encomium chanted by five thousand of his soldiers. … The recollection of this gave the 16th-century French poet, Jean Daurat, an idea which has developed into the modern claque. … There are commissaires, those who learn the piece by heart, and call the attention of their neighbours to its good points between the acts. The rieurs are those who laugh loudly at the jokes. The pleureurs, generally women, feign tears, by holding their handerkerchiefs to their eyes. The chatouilleurs keep the audience in in a good humour, while the bisseurs simply clap their hands and cry bis! bis! to secure encores.

Trump, probably without knowing about the historical precedent, has revived this old tradition." 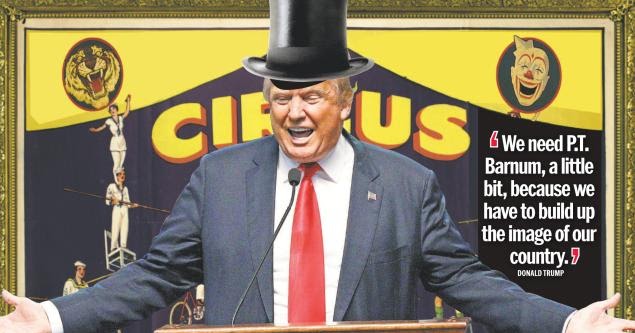 Trump's travelling salvation claque by digby According to Henry Farrell in the Washington Post ,  Trump's habit of putt...

I have seen the word “clacque,” but I just assumed it meant “clique,” which is kind of stupid when you think about it.

The Bush technique is so much more honest.

Between this and Kellyanne’s “alternative facts,” I am laughing myself sick over Trump. Since the American system elected him, we deserve whatever comes next.

Kellyanne Conway is now getting Secret Service protection because she received a package with a suspicious white powder. I’m wondering if that even happened or if it’s an “alternative fact”, but of course she’s blaming the media’s negative coverage of her.

No. No we don’t. What comes next might not be hilarious at all.

We don’t deserve it at all. First of all, most of us didn’t vote for him. Second, even the people who did don’t deserve being shit on, which is exactly what’s about to happen. That’s like saying an elderly person who falls for a con deserves to lose their life savings. Con artists know who to target, who will most likely fall for their con. In the case of Trump, it was the uneducated working class, and the wealthy. Well, the wealthy didn’t fall for his con so much as realized it benefits them, at least in the short term. Regardless, they don’t deserve what’s about to happen. The best we can hope for is that we’ll learn from this and be more resistant to a con job like this in the future.

$50/each to wear campaign shirts and cheer wildly

$50 bucks to sell your soul to the scum of humanity?

Putin is his role model in so many ways. He too has staffers who jeer at the press, laugh at his jokes and applaud his pronouncements. In the case of the current U.S, President, though, the claque is driven as much by a narcissistic man-child’s personal insecurity as it is by political strategy.

The media needs to start filming the faux crowds and identifying them on air - it would be a great weekly segment.

Yes, and also give the claque regulars funny nicknames.

The media should do these things. Whether they do is another matter. Look at these shameful Tweets from two senior WaPo reporters about a press secretary who blatantly lied to and abused the media:

I disagree that we deserve whatever comes next. We are human beings, and we deserve to be able to get on with our lives, but now we have to spend every single day of the next four years fight for our fellow citizens and their rights to pursue happiness, in spite of the Trump administration.

awww, but he did use the magic word, please

where the Emperor Nero deployed his own crowds, called “Augustiani,” to cheer at his indifferent poetry and lyre playing.

Well, we can all be thankful that Trump does not expect us all to enjoy his poetry readings.

[quote]
The prisoners sat in Poetry Appreciation Chairs—strapped in. Vogons
suffered no illusions as to the regard their works were generally held
in. Their early attempts at composition had been part of bludgeoning
insistence that they be accepted as a properly evolved and cultured
race, but now the only thing that kept them going was sheer
bloodymindedness.[/quote]

Don’t give Trump credit for this! Apple has stuffed the front row of their presentations for years with paid employees. And that was just the tech industry version of the professional audience that sitcoms have been using for years to get the oh so perfect laugh track. I’m hardly surprised that the once reality TV star would “Hollywood” his presidency. I’d be kind of surprised if it hadn’t been done before him.

Putin is his role model in so many ways. He too has staffers who jeer at the press, laugh at his jokes and applaud his pronouncements. In the case of the current U.S, President, though, the claque is driven as much by a narcissistic man-child’s personal insecurity as it is by political strategy.

Where do you get the impression that Putin doesn’t have the same narcissistic man-child’s personal insecurity? All the evidence suggests that Vlad is just as desperate.

Where do you get the impression that Putin doesn’t have the same narcissistic man-child’s personal insecurity? All the evidence suggests that Vlad is just as desperate.

It just doesn’t seem as deep-seated in his personality. He’s concerned with maintaining his power, of course, and the evidence of the claque and the ornate trappings of an autocrat’s power supports that political goal. From a psychological viewpoint, however, I don’t think he’s as personally thirsty for love and attention as his American counterpart is (or, for more local examples, as Tsars like Nicholas II were).

$50 bucks to sell your soul to the scum of humanity?

What do you expect when all the American jobs have gone to the Chinese and the illegal immigrants? Sad!

Who brought those jobs there? Right, the billionaire and millionaire American job makers.