I hadn’t planned to sleep there so I hadn’t brought deodorant and a toothbrush in my bag. I was sweaty and my mouth felt gross and I just wanted to go home and shower but that apparently made me a huge buzz kill and not a “fun girl”.

I used to be that guy. But then I found boingboing where people are willing to school me when I say really stupid shit.

Really, getting torn a few new assholes on boingboing probably is the single biggest factor in me realizing that it’s stupid to be a misogynistic MRA. The happy mutants know where it’s at.

Hi! I’m the artist who drew these. I have personally known/met a lot of guys who consider makeup to be dishonest and are more interested in “natural” girls.

I am not into women who wear makeup, but I don’t consider it dishonest. I just don’t see the point of going to all that trouble to change your looks. But then I’m an engineer, so I don’t ‘get’ steampunk or other surface treatments either.

I also don’t have any patience for the Men’s Rights folks. Men run the world, so it’s not like we are downtrodden.

I am not into women who wear makeup, but I don’t consider it dishonest. I just don’t see the point of going to all that trouble to change your looks.

FWIW, lots of guys who make this claim don’t realize that some of the women they find attractive are actually using makeup in less obvious ways, but going for a “natural” look just to cover blemishes and such.

Pretty much every guy in Hollywood uses makeup in the same way but you never hear complaints about Brad Pitt or George Clooney “deceiving” people about their appearance, nor people who claim “I’m not into actors who wear makeup.”

Yeah, it says things like “I used to have breast cancer.”

At the risk of using a loaded term:

That comment is what I call a head shot.

We can close down the Internet today, we have a winner.

what is she parodying? 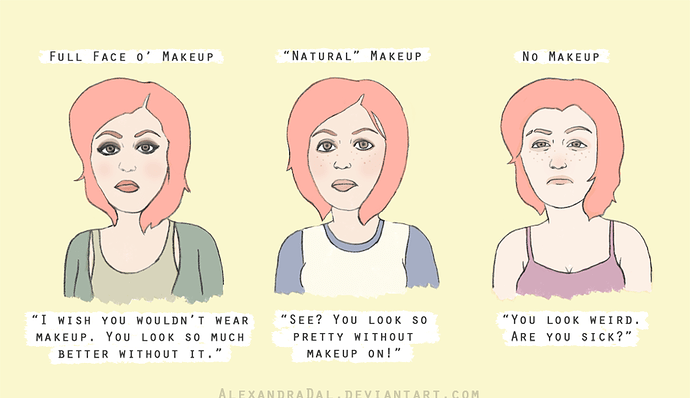 Santa only comes for children.

“Who is this pretty lady and what is she doing in my house?”

Yeah I feel like BB along with Dan Savage and a handful of other sites were really my first exposure to these things. Luckily I found all that stuff in high school. I mean certainly didn’t totally escape that mentality, I think few young men do. I’m definitely embarrassed by some things and regret some past behavior. But I was never totally comfortable the entitled misogynist, my subculture equates to an oppressed minority because jocks hated me thing. And I moved past it pretty quick.

what is she parodying?

Boy bands generally. But particularly the last few years, and IIRC specifically One Direction. There’s this whole borderline creepy, saccharine genre of dancey, upbeat songs for tween girls about how they are perfect and beautiful and exactly what insert the cute one here always wanted in a woman. Often calling specific things like not having to be wealthy, dressed in fancy cloths, involved in the popular group etc. And if what my 14 year old cousin (who hates this shit because she is brilliant) tells me is true calling out that a girl looks good without make-up is a common feature.

I’m handing out Internet Win tokens like candy today. Please collect yours and enjoy the matinée.

This was so good.

I was surprised at the sheer number of hilarious variations on the theme you came up with. I’d be stumped at two or three at best.

He killed himself in 1969, both his books were published posthumously in the '80s.

I think that could have been phrased better.

FWIW, lots of guys who make this claim don’t realize that some of the women they find attractive are actually using makeup in less obvious ways, but going for a “natural” look just to cover blemishes and such.

Yeah, a lot of guys do that. But as a man who grew up with three sisters and has been married twice, I know I generally prefer how most people look without makeup, if pressed to offer a preference. I mean, nobody really cares what I think of their face, I figure, and if they put on makeup it’s for their own satisfaction (or so that other eyes than mine will find the effect pleasing), but I just happen to like clean unadorned skin, “blemishes” and “imperfections” and all.

But if someone wants to wear makeup, why would I care? I don’t like kissing lipstick, as a rule, but otherwise I don’t care at all.

I suppose it can be a Travesti role…

Well, it says said girl decided she wanted bigger tits is all it says.

But if healthy, there’s usually greater payoff from learning to be comfortable in your own skin rather than paying someone to change it. Counselling is way cheaper than cosmetic surgery and doesn’t involve permanent physical changes.

It’s near-universal, and the guys who prefer “natural beauty” are indeed oblivious to what “natural” looks like.

Ryu’s got it right, Schumer is parodying One Direction, here’s a sauce.

Also, 60 posts in and I get to be the one to bring up the fact that Beyonce made the “I woke up like this” meme when she broke the internet.

Anyone who doesn’t understand that some d00ds equate makeup to deceit ought to get hip to the sensation that this hit sparked.