The officer here simply was taken off the Blood Draw Unit. Repercussions, schmepercussions.

There seems to be some confusion about what happened. From the article I get the picture that the nurse stopped the cop from drawing blood (apparently some US cops are trained to do this). Whereas the BB post gives the impression that she refused an order to draw blood.

A neighboring police department sent Payne, a trained police phlebotomist, to collect blood from the patient and check for illicit substances, as the Tribune reported.

It all started when a suspect speeding away from police in a pickup truck on a local highway smashed head-on into a truck driver, as local media reported. Medics sedated the truck driver, who was severely burned, and took him to the University of Utah Hospital. He arrived in a comatose state, according to the Deseret News. The suspect died in the crash.

Frankly I think she’s doing everyone a disservice if she doesn’t lawyer up and burn him to the fucking ground.

Edit: if you watch the beginning of the video it sounds like the cop was in fact under orders to arrest her if she refuses to give him access to the patient. So it’s the leadership and the department that needs to eat shit over this. He’s an asshole, but what he demonstrates here is institutional bad judgment, not a bad-apple popoff.

I hope the hospital and this nurse sue the ever loving shit out of the department.

It amazed me that the other officers there don’t stop things like this. Stand up for what is right.

Moroni, what an idiot!

Wow. Someone needs a sedative. I hope they sue the shit out of everyone. Nurses are right next to teacher in the ranking of awesome.

From my understanding of the case was that a person fleeing from State Police hit an 18 wheeler head on, the person driving the 18 wheeler was a reserve police officer with one of the local PD’s. The person running from the SPD died on impact. An officer from another jurisdiction asked the detective in the video to get a blood sample from the victim in the crash, the reserve officer in the 18 wheeler, and told the detective that if the hospital wouldn’t cooperate then he should arrest whoever wasn’t allowing it. 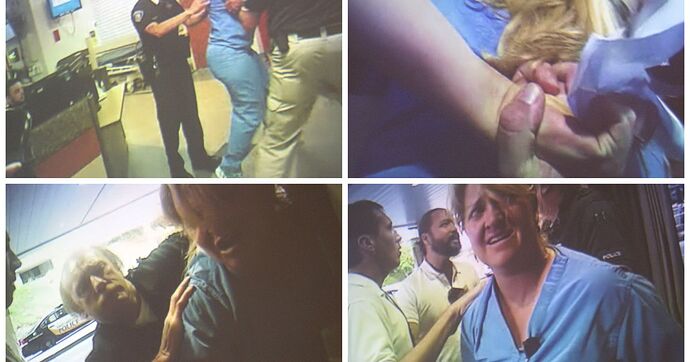 A nurse says she was assaulted and illegally arrested by a Salt Lake City police detective for following a hospital policy that does not allow blood draws from unconscious patients. 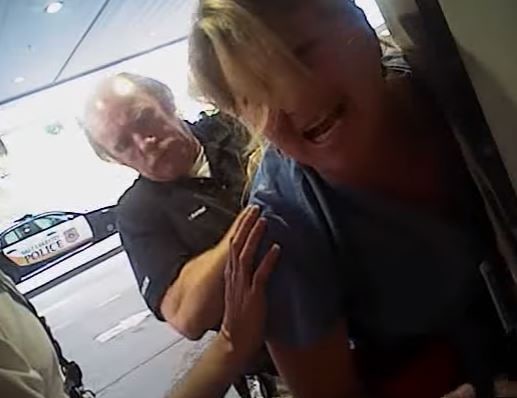 ‘This is crazy,’ sobs Utah hospital nurse as cop roughs her up, arrests her...

Police video shows the moment Detective Jeff Payne snapped at nurse Alex Wubbels after she told him hospital policy barred him from collecting blood samples without a warrant or patient consent.

It amazed me that the other officers there don’t stop things like this. Stand up for what is right.

Frankly I think she’s doing everyone a disservice if she doesn’t lawyer up and burn him to the fucking ground.

That would take an Olympic effort.

Oh, what’s that? She’s an Olympian?

Unfortunately only service weapons, kevlar, and badges are issued to police officers not backbones.

Nurses are right next to teacher in the ranking of awesome.

I’d argue they’re a notch up, with firemen. In the category when, if they show up unexpectedly you can assume whatever is going on is handled.

Cops do not fit this category and haven’t in a long time.

The next move is for him to claim job stress and get disability…forever.

there’s some group out there that keeps telling people that ignorance of the law is never an excuse for breaking the law…who were those guys again?

The closest anyone came is the milquetoast motherfucker who puts his hand on the detective’s shoulder when he has her pinned up against the wall outside and gives him the gentlest of pats and a half-hearted “c’mon…” to try and stop him.

He very clearly knew that what was happening was 100% wrong, but couldn’t summon the moral courage to do anything other than look sadly into the body cam.

Now I’m scratching my head like a cop in Fargo.

Is it that, State Police may have chased the dead guy too aggressively so he went splat into an 18 wheeler, and not knowing the truck driver was a reserve officer, they thought, well, if that guy’s on speed like many a truck driver, we can blame the death on him?

couldn’t summon the moral courage to do anything

I think maybe the color blue makes it hard to remember oaths.

No, according to the video the detective is there for the blood sample to “protect” the victim. That’s why he doesn’t need procedure and law to do it, because the victim is a cop as well. Only when its another cop will the police go out of their way to “do the right thing.”

I think maybe the color blue makes it hard to remember oaths. 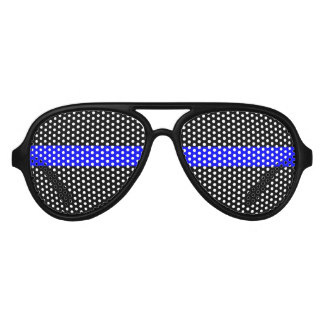