Dick Cheney complained that Donald Rumsfeld drank too much coffee

I knew there was a reason I hated Dick Cheney.

Ford’s own ineptitude had created the opening for Rumsfeld’s machinations.

I hear the Devil’s tummy growling for BBQ Cheney!

"Yogge Sothothe Neblod Zin," the priest began chanting. "By Ashtoreth, by Pangenitor, by the Yellow Sign, by the gifts I have made and the powers I have purchased, by He Who Is Not to Be Named, by Rabban and by Azathoth, by Samma-El, by Amon and Ra, vente, vente, Lucifer, lux fiat!"

Joe never saw it: he felt it—and it was like chemical Mace, blinding and numbing him at once.

One of the women began weeping in fear.
“Quiet, you fool,” Simon shouted at her. “Don’t give it more Power.”

“Your tongue is bound, until I release it,” the priest said to her—but the distraction of his attention had its cost; Joe felt It growing in potency again, and so did the others, judging from their sudden involuntary gasps.

There was a hiss, like air pouring into a vacuum, and the atmosphere began to clear – but it also dropped abruptly in temperature.

MASTER, CALL NO MORE UPON THOSE NAMES. I MEANT NOT TO ALARM THEE.

The Voice was the most shocking experience of the night for Joe. It was oily, flattering, obscenely humble, but there was still within it a secret strength that revealed all too well that the priest’s power over it, however obtained, was temporary, that both of them knew it, and that the price of that power was something it longed to collect

“Come not in that form either,” said the priest, more stern and more confident. “Ye know full well that such tones and manners are also intended to frighten, and I like not such jokes. Come in this form which thou habitually wearest in thy current earthly activities, or I shall banish thee back to that realm of which you like not to imagine. I command. I command. I command.” There was nothing campy about the Padre now.

It was just a room again—an odd, medieval, mideastern room, but just a room. The figure that stood among them could not have looked less like a demon.

“OK,” it said in a pleasant American voice, “we don’t have to get touchy and hostile with each other over a little theatrics, do we? Just tell me what sort of business transaction you went and dragged me here for, and I’m sure we can work out all the details in a down-home, businesslike, cards-on-the-table fashion, with no hard feelings and mutual satisfaction all around.”

To be fair, I think Cheney was complaining that Rumsfeld was too liberal and promiscuous in sharing his coffee.

One month later Cheney would replace Rumsfeld as Chief of Staff, when Rummy is appointed Secretary of Defense. I can only imagine his first action would be to switch everyone to Folgers Crystals.

It is a cruel bit of fate that I feel compelled to renew my prior oath.

Meh. After seeing Cheney’s mug in this thread, Pennywise holds no terrors.

I’ll take your list, since it’s all people I’d throw my shoe at, and add Stanislaw Burzynski, since he’s managed to bully the Texas state medical board into allowing him to murder children with cancer via hypernatremia poisoning.

No, Cheney will not die! He is evil and evil does not die; rather, it must be destroyed!

First the one, then the other. Most of us are walking around with two shoes after all.

hmm, outside of this handy coffee chart 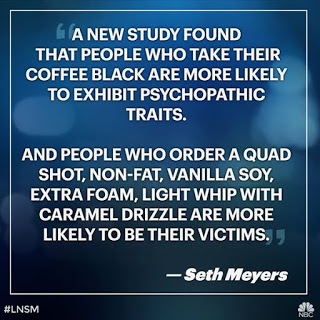 Dear Mr. Rumsfeld,
I am sorry but the following expenses have been disallowed by internal budget control:

Madison too had a tendency to confuse meum and tuum when it came to countries. But Canuckistan handed him his backside on a plate (and ate his victory banquet for him.)

Surprised that Cheney didn’t just invite him to go hunting.

See what happened when this actually occurred.