Do not put headphones on the Buddha in Burma, unless you enjoy meditating in prison

Full-on racist spelling: “Mararita”. Is that the way it is pronounced by Jerry Lewis, wearing thick-glasses and fake buck-teeth?

or maybe just a typo?

This would’nt have happened if they’d given Buddha a good pair of HD25’s instead of these crappy headphones!

The Buddha I’ve grown to admire would be amused by this depiction of himself. The last thing he would want is any ‘suffering’ be imposed on those responsible.

I thought the Buddha didn’t want to be deified. Why aren’t all the statues of Buddha insulting to Buddhism by ignoring the wishes of the Buddha?

(Also, I thought this story was going to be about some tourists who stuck headphones on a statue and got arrested, not people making a poster for a Burmese business :-0 )

The role and influence of Buddhism in Burmese society cannot be understated. It is political posturing to send them to jail. Under Buddhist belief there, they’ll be punished by karma which is worse than jail, so jailing isn’t necessary except for the gov’t to appeal to the monks who tried to overthrow them in 2008. On the poster, a greater offense than the presence of headphones is that of naming an alcohol-related event “Budda Bar”. Imbibing and religion are sharply separated - monks do not drink and rarely even smoke. What’s odd and sad about the Facebook statement is that clearly the owners are not working closely enough with native Burmese to “get it.” Elsewhere they misspelled the name of a local DJ “Damma Phunk” as “Damma Phuk”. They may also not realize that the Burmese who are drawn to this venue, and who can afford it, are likely to be children of the scummy generals who, to this day, are actively stealing property and imprisoning outspoken students and journalists. The bar has also put up big Chivas signs. For decades, the only way for exiles to get things sent home to their families was to include a bottle of Chivas for the airport inspector. So that sign is like putting up a flag that says “Corruption Headquarters.” Missing from table discussions will be any remarks about the Generation 88 political prisoners who, though released, are suffering from such grievous long term abuse that two of them have died this year - one just a couple of weeks ago.

Why aren’t all the statues of Buddha insulting to Buddhism by ignoring the wishes of the Buddha?

because they are statues, not deities?

You can, however, put spectacles on Buddha, or surround him by flashing lights as though he is a Christmas Tree (a typical sight at many a temple there). 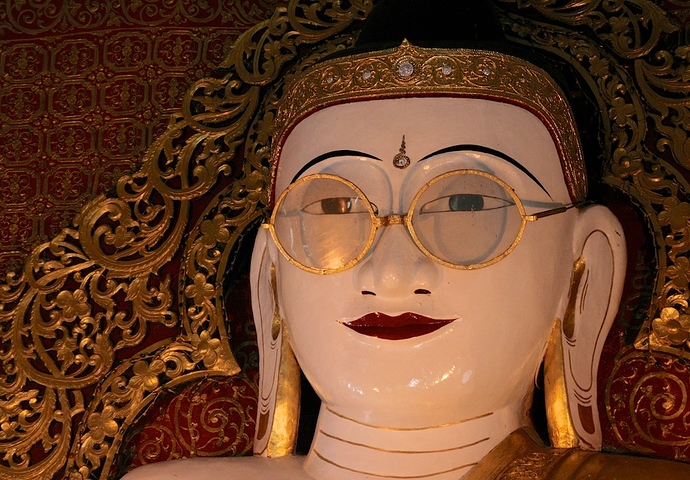 They also seem to have named their bar “Buddha Bar”, which is kind of offensive, considering that selling alcohol is a violation of “right livelihood” in the Noble 8-fold Path. (So is political corruption, of course, but some sins are easier to prosecute than others.)

Dumbasses. Buddha is not to be trifled with in Asia. Simple case of cultural ignorance.

Burma’s worked harder than any nation to prove that Buddhists are all too human.

Thankfully, Iran is on the case and can tell is all about how the Jews are behind it

Iranian Officials: The Jews Are Responsible For The Massacre Of Muslims In...

As part of their policy to present the Jews and Zionists as aspiring to take over the world, Iranian officials consistently claim that they are involved, overtly or covertly, in every international event and crisis.

Hat tip MEMRI and Frontpage Magazine "The genocide of the Muslims in Myanmar is ostensibly being carried out by the Buddhists, but we are...

With antisemitic cartoons featuring pastiche representations of the Buddha.

…just in the backwards shitholes of asia.

I wonder what they’ll make of my photoshop: 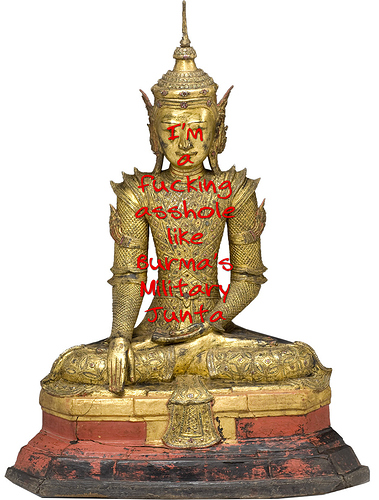 My guess would be that the name of the drink refers to Mara, the Evil One.

From Wikipedia: “Mara (demon) … In Buddhist cosmology, Mara personifies unwholesome impulses, unskillfulness, the “death” of the spiritual life. He is a tempter, distracting humans from practicing the spiritual life by making mundane things alluring, or the negative seem positive.”

So, I’m guessing that “Mararita” was meant in the same sense as drink names like “Devil’s Whiskers”, “Satan’s Revenge”, etc., and is a play on words (Mara/Margarita) as well.

(My first comment ever on BoingBoing. Have enjoyed reading, especially the comments, for years.)

If I were strong and someone suggested that I needed protection from an insult I would feel insulted.

Just goes to show that when anything gets far enough away from the source, it inevitably becomes corrupted and a mockery of the original intent.

(similarly, I imagine that Jesus would flip some tables and break out the whip at any Republican convention)

Only if you had a thicker skin than an adherent of 4th most practiced religion in the world, and the dominant religion in your country.

I do agree though. Whenever I hear someone support religiously based retaliation of any kind, I usually ask them, “isn’t it incredibly hubristic and insulting to your all powerful god when you go to war in his name? Isn’t it just saying that you don’t think your god is strong enough to defend himself?”

Seriously. If anyone’s god actually existed outside the adherent’s own minds, then they’d better protect themselves. If everyone started cursing god’s name, demanding to be struck by a meteorite, every second of every day, there would be no change in how many meteorites hit the ground.

I haven’t been struck by lightning yet.