He plans to shut down the EPA as well. So between poisonous air, food and water, medicines that don’t work and no one with affordable healthcare I’m sure they’ll find some way to pin it on liberals (if there’s anyone left alive who cares)

That’s his plan! cause a massive human die-back, reducing our environmental impact by there been fewer of us. Genius! Also that will allow his Greatness generation plans to focus Greatness levels to previously unheard of peaks in the chosen few meaning they can laser sculpt Mount Rushmore into four aspects of The Donald just from their beatific gaze…

Here’s an old article on it from the Atlantic

Upton Sinclair's realism got the better of his socialism

… but the main thing it consumed was people. Upton Sinclair tried to elucidate and illuminate the ways in which commodities deposed, and controlled, human beings. His novel is the most successful attempt ever made to fictionalize the central passages of Marx’s Das Kapital.

The Peripheral is a 2014 science fiction mystery-thriller novel by William Gibson. The story involves multiple futures. On April 19, 2013, Gibson appeared at the New York Public Library and read from the first chapter: "The Gone Haptics". The novel focuses on Flynne and her brother, Burton. Burton is a veteran of the United States Marine Corps' elite Haptic Recon force. Burton is hired for a security job which takes place in what he thinks is cyberspace. When Flynne temporarily takes his place, s...

Ooooh, look how green Austral’yer is… And they have lakes! @M_M, @Kimmo, etc do ya have a spare couch?

Pretty sure that’s an artifact of the elevation coding scheme.

Don’t you remember looking at a these sorts of maps as a kid and realizing “Huh. That’s weird. Why is the Sahara Desert Green?”

Maybe it was an artifact of printing technology.

Ooooh, look how green Austral’yer is… And they have lakes!

Not even proper summer yet.
So the spare sofa’s always on offer, but swing by the bottle-o on your way down and pick up a slab and a couple bags of ice, eh.

He can do a two-for-one and destroy ScISIS.

Hopefully the War on Science will have the same effect as the War on Drugs, and the War on Terror. We can look forward to an increase in the availability of drugs, terror and science.

Does he stand a better chance of defeating science or ISIS?

He should give everyone in ISIS a science degree, then they’d cease to exist.

A small point, but important: Harper never denied climate change. He minimized it, ignored it, and blocked any attempt to actually do something about it, but he never denied it.

Harper never denied climate change. He minimized it, ignored it, and blocked any attempt to actually do something about it

Isn’t that the definition of denial?

A thin distinction, but he never explicitly said that climate change didn’t exist. He just hummed really loudly and stuck his fingers in his ears when the topic came up. Trump, in contrast, has said on multiple occasions that he thinks that it’s a Chinese hoax.

Unfortunately, the results are the same in either case.

P.S. The POTUS may have seriously serious power, but the office can’t take back observation(s), period. 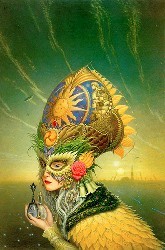 Unfortunately, the results are the same in either case.

Oh, certainly. No disagreement there. I remember the Harper library purges, and just wonder what science Der Trumper is going to purge first in favor of American Science–Mexican Science? Chinese Science? Probably not Jewish Science, we did that last time.

In some ways, it’s more insidious than denial. Since with denial, there’s something specific to point to and fight against. With a minimizer, like Harper, he sometimes says scientifically accurate things just to throw you a bone and stop complaining, but prevents you from doing anything about it.

No, but it can help write legislation and it can set policies for federal departments which have relationships to scientific fields. Observation doesn’t matter when you can set policy.

Trump, and his Business brought republicans at both the congress and senate, plans to shut down any, if not all, federal regulations that hinder mega industries (such as Koch) from competing with the rest of the world in terms of productivity and economic wealth. That means all of the Unions will be disbanned, the Environment will be destroyed, and people will be forced into slave labor; all while the industries are free to do whatever they want with no consequences.

Some schools, yes, but surprisingly even in Chicago it’s not required.