I know we can’t just not report on turmp, but it will be so much more enjoyable when all the headlines, finally, are in the past tense.

So much for his claims that the women accusing him are “Not my type.”

They’d all probably accuse him of rape. He just forgets which ones he has gag settlements with.

He may not have syphilis but he certainly is the living embodiment of it.

I mean they did look very similar, but totally goes against the “not my type” excuse

The very stable genius in action.

So is face blindness a symptom of something else like dementia?

I really can’t imagine ever confusing someone else’s face with my ex-wife.

Given forum rules and general ethics, I’ll not speculate on the diagnoses of anyone I’ve never met. I will note that I read a fun little meta-analysis last year which indicated that people with narcissistic tendencies do have significantly lower facial recognition abilities than the general population. Make of that what you will.

Not trying to diagnose someone per se. I’m just asking if face blindness is a symptom of something larger. (Or maybe that is the wrong word for what is happening. Face confusion?)

It could also just be a senior moment or brain fart. Like the other day I couldn’t say “butter dish” and it came out “butter platform”. Pretty sure I’m demented, but don’t have dementia.

If the mods think I crossed a line, PM me and I will edit out the first sentence.

Like the other day I couldn’t say “butter dish” and it came out “butter platform”. Pretty sure I’m demented, but don’t have dementia.

I get this sort of thing occasionally as well; the clinical version, which neither of us likely has, is a kind of aphasia. 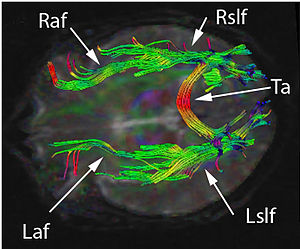 Pages for logged out editors learn more Anomic aphasia (also known as dysnomia, nominal aphasia, and amnesic aphasia) is a mild, fluent type of aphasia where individuals have word retrieval failures and cannot express the words they want to say (particularly nouns and verbs). By contrast, anomia is a deficit of expressive language, and a symptom of all forms of aphasia, but patients whose primary deficit is word retrieval are diagnosed with anomic aphasia. Individuals with aphasia who d...

I wondered if it might have been a ploy, i.e. “look at them persecuting the poor old man in court,” like the way some defendants suddenly need mobility aids for their day in court. But I think Trump is unlikely (for now) to feign dotage or other impairments.

Wife, ex-wife, rape victim, it’s all the same to him

looks like someone needs to fix the onebox code. We may have to wait another ten years

He also raped at least one of his wives.

So he confuses who is who in photos, eh? Early signs of cognitive decline?

Isn’t a standard question when testing for mental competence / dementia: who is the President?

I’d like to see them ask him that one. He’s bound to fail.

who is the President?

I’d like to see them ask him that one. He’s bound to fail

I’m convinced that in the 80’s, in Studio 54, Trump caught Syphilis, banging hookers in the bathrooms, and that it was never treated, so it’s in its tertiary stage, lodged in his brain, which is already deteriorating due to dementia and his addiction to snorting Adderall.

I’m not criticizing your comment, just offering information which may, at some level, circle back to your question while making sure I didn’t cross any lines. Just kind of setting that information down and saying “look at this fun bit of information!” while innocently shrugging my shoulders about connections other people may draw.