On the plus side, the fanbois who used to show up here regularly to contradict any suggestion that this impulsive edgelord was not a super-genius business tycoon playing 4D chess have decided to curtail their own “free speech” in his behalf.

I actually kinda miss 'em. It was fun watching them get effortlessly slapped down.

Musk was also talking about “worldwide” layoffs, so he may run into foreign labor laws as well.

I remember a woman who worked for a US company telling me that when the new managers laid off 2/3 of the workforce, they sent a fax to their French and German subsidiaries saying “You’re all fired, last one out please turn off the lights.” The French and German employees sent a fax back saying “We don’t think so. Read the law.”

Of course that company (no names, no packdrill) also fired the entire dev team working on the software product that they hoped would save the company, then had to hire them back as consultants at three times the cost when they realized what they’d done. I wonder if Musk will end up doing that with some of his people?

I find it hard to believe that Twitter was really overstaffed by 50%, which means that he’s not simply trimming the fat, he’s firing essential workers. That’s going to throw a bigger load on the remaining employees – not only do you have more work to do, but you have to laboriously re-learn and re-discover everything that your missing colleagues knew, so everything takes three times as long. Add in Musk micro-managing up a storm, breathing down everyone’s necks demanding results by Friday and you have a recipe for burnout such as God Himself has never seen. He’s going to lose more headcount before long, and it won’t be the deadweight that goes, it’ll be the best of the best.

The Hour of the Failwhale draweth near … 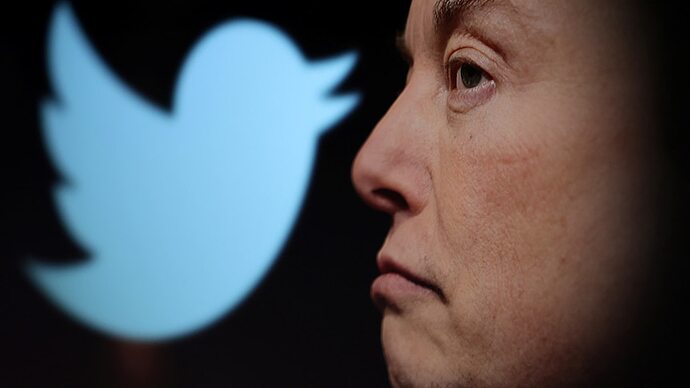 The ABC understands most Australian Twitter staff have been logged out of the company's system, with workers globally to find out whether they still have a job via email.

Part of me thinks he’s trying to destroy the company on purpose – but I don’t think he’s actually smart enough to do that or to think that far ahead.

Like Trump, he’s a deeply stupid man who has no one who will tell him he’s an idiot and enough wealth to be able to shrug off the full effects of his stupidity.

I think this is the likely tack indeed. Should we be surprised if in a year or less the loudest set of bots on twitter are in the hands of the FSB (and to a lesser degree Riyadh)? Musk is a useful distracting idiot for these propaganda engines; both surrendering to them the megaphone and demonstrating what climax capitalism saddles one with.

I think this is the likely tack indeed. Should we be surprised if in a year or less the loudest set of bots on twitter are in the hands of the FSB (and to a lesser degree Riyadh)? Musk is a useful distracting idiot for these propaganda engines; both surrendering to them the megaphone and demonstrating what climax capitalism saddles one with.

The joke’s on the FSB and Riyadh if his layoffs gut the company so badly that by the time he hands over the megaphone, the damn thing just doesn’t work any more.

I would laugh so hard if Elon’s attempts to control Twitter create a mass flight to platforms like Mastodon and end up normalizing the idea of federated interoperable social networking. I don’t pretend that a decentralized social media space won’t have problems of its own, but it’ll be funny as hell if Elon’s flailings end up restructuring the landscape so that there’s no place for corporate giants like Twitter or Facebook any more.

As someone who’s twice made this mistake: never work for a “foreign” subsidiary of an American company. They will cut you so fast if they think it will shore up local operations. The fact that they may be violating labour laws is cold comfort while you’re trying to get that, and you unemployment, sorted out.

This honestly works for foreign subsidiaries inside America too. I worked for a french company that when it came time to do layoffs, never did them in France because of labor laws making it nigh on impoossible, and instead did them in the US because the French labor laws didn’t extend to employees in the US. So we were always the first to get hit even if our departments were gaining money. They’d shift our projects to France, make us train our replacements, and then fire us.

Planning global reorganizations for a giant multinational telco was a real PITA, and the US has some of the weakest worker protections in developed countries.

They are still all over reddit if you want a go at them.

So, none of the three people I know at twitter are there anymore.

Except, technically, they are. They all got emails that followed up stating that they have no job duties, are still employed, and have no access for 60 days to comply with the WARN act. That should end the lawsuit on that violaltion. Still unclear if they’re going to get any severence. Or how many were affected. All three of them told me they don’t know anyone who still has a job there (other than the technicality), and that it might be closer to 60 or 70% than 50%.

Yeah, I don’t think he plans to make a profit off of twitter legitimately. I think he wants to use it to manipulate markets and politics and take money under the table to do that on the behalf of others. Longer term, I think he’s banking on the IPO. Whether it is survives to do any of this effectively is yet to be seen. Hopefully not.

It’s as good a guess as any, because at this point it’s clear he hasn’t got the foggiest fucking clue how to utilize what he purchased in any logical or coherent way. He’s just flailing around like a freshly tasered jackass, and about to fall flat on his face. Twitter is gone. Move on if you haven’t. I’m on Mastodon and Cohost and Countersocial and trying some others. I would love if we’d move away from the “one company should fit all” tech douche bro silo’s and have truly federated systems like Mastodon seems to be.

He’s going to lose more headcount before long, and it won’t be the deadweight that goes, it’ll be the best of the best.

The company’s advertising and marketing chiefs have recently announced their departures, as well as the chief people and diversity officer, the general manager for core technologies, the head of product and vice-president of global sales. 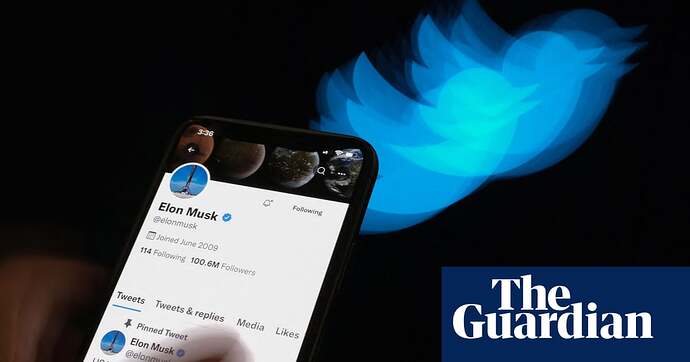 In the wake of Elon Musk’s takeover of the company, rumors of job cuts swirl and employees report being left in the dark

As a UKian, watching Lone Skum and Twatter is a bit like watching the car-crash that was Liz Truss and the UK economy, only in much slower motion. IdeologueIdiot meets reality and reality says: “Nah”.

ETA I realise I used the wrong word before. Corrected now.

My GF used to work for a sout African firm who had its tentacles deep in the NHS among other things, and they were similarly awful.

I worked for one of their previous incarnations and quit as soon as my first paycheque came came through.

And he’s already blaming it on everyone BUT him. “Activist groups” are his new scary people who are hurting his revenue, which sounds (to me) like a catchall for progressives. I’m particularly struck by his comment “… we did everything we could to appease the activists,” when he’s literally done nothing to appease anyone but his own ego. 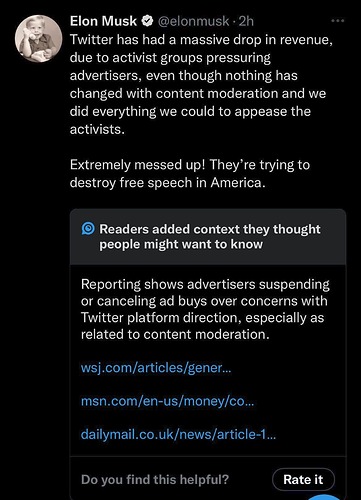