Here’s what it looks like from a car’s perspective: 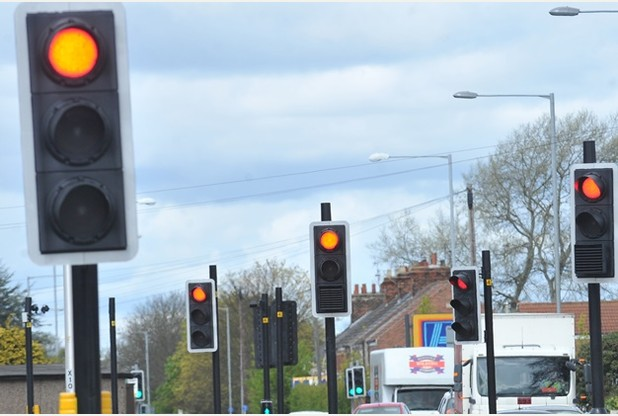 The driving part of the roundabout before the conversion was also simpler: 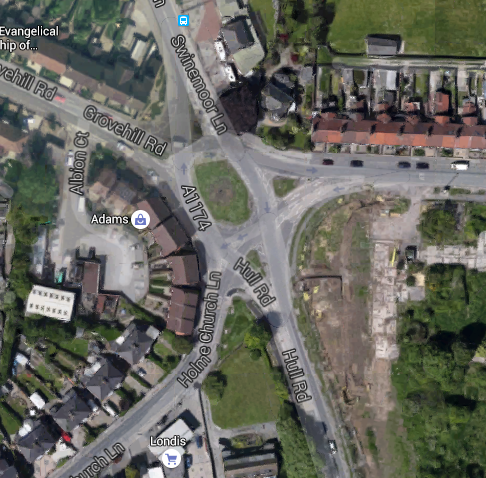 Newspapers all over Europe made fun of the design, and an independent audit just criticized it, but the council is digging in.

Thanks. I definitely see your point about the wear of the road tube and detection failure. In my specific instance the Y-intersection is in a forested area on a narrow county road with a 40 MPH speed limit. The corner itself is around 90˚, making it a bit nearer a T than a Y. 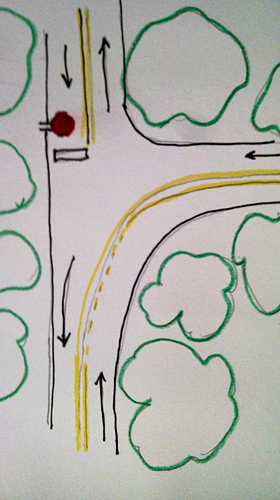 The forest service has cleared the corner from undergrowth but it is also a private property so clearing the trees seems highly unlikely. I guess a strategically placed speed detector could do the trick. The road tube option appealed because they seem more innocuous to me than the speed catchers, but perhaps a solution based on the latter would be the better one. This is not anything like a high traffic area. The issue hardly exists; but passing the sad little memorial there with its wilted mylar balloons and weathered stuffed bear arranged around a wooden cross like death at a kids birthday party makes me wanna do something.

I want to know the evolution of objects and manufacturing.

Coming to mind is something I read in a book from 1973, Baskets As Textile Art, by Ed Rossbach [apologies, I have a hard copy of the book but I’m not finding the image I want to show you available on the internet]. Figure 9. on page 15 shows a basket made of wood veneer and a basket that looks almost like it, of plastic. The caption:

Bucket baskets of wood and plastic. Early in the century baskets from veneering were feared to be replacing traditional plicated baskets. Today the replacements are already being replaced by plastic baskets made in molds which faithfully reproduce even the staples.

Baskets, which have always been made by hand, are not being replaced by baskets made by machine; they are being replaced by other useful objects of plastic and paper which serve the same purpose. … Only for a brief time these replacements are imitating baskets until new forms are found and old forms are forgotten.

Now that I think of it, that’s a lot like having a “radio button” or “floppy-disk” symbol on a computer now. I think there’s a term for that, and a field of study around it…at the moment I can’t think of the name for it.

Who remembers the #floppydisk - the 5.25 inch stored all of 1.2 megabytes https://t.co/ZDuOFrkEpu 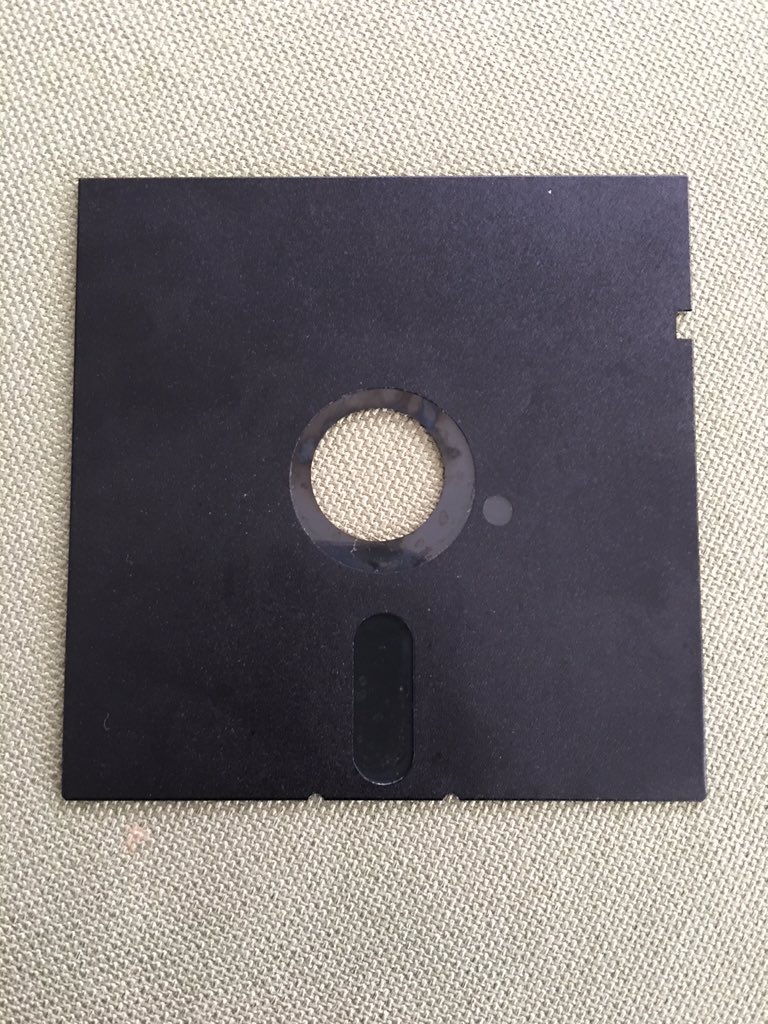 I have a five-way roundabout about six blocks from my house. Before they put it in it was a five-way stop. I can’t tell you how many times I narrowly avoided getting run over before they put in the roundabout. Now people actually pay attention there, and it’s much safer.

They also put in crossing flashers and buttons, which are wonderful.

This is the fucking shit, right here:

DIY AA batteries, made out of syringes, zinc metal, NaOH, Charcoal, a graphite pencil lead, and some filterpaper.

Basically, the purpose of this thread is to try and tag along with Mary Roach. Mary Roach is an American author, specializing in popular science and humor. As of 2016[update], she has published seven books,: Stiff: The Curious Lives of Human Cadavers (2003), Spook: Science Tackles the Afterlife (2005) (published in some markets as Six Feet Over: Adventures in the Afterlife), Bonk: The Curious Coupling of Science and Sex (2008), Packing for Mars: The Curious Science of Life in the Void (2010), My Planet: Finding Humor in the Oddest Places, Gulp: Adventures on the Alimenta Ro...

Pretty much, just stop for a second and say this $THING I use every day, I’m not sure where it comes from. I mean I have lots of guesses and assumptions, but let’s fucking figure this shit out!

Before the internet my dad had a pat, confident answer for pretty much everything. Either “I know this, let me show you”, or “it’s a miracle from jesus.”

I eventually got into the “you don’t really know, I’m going to figure this out” phase, and now that’s pretty much what I do. But it still falls short.

For instance, I know a shitton about the drugs I use every day, and occasionally for fun, but I don’t know the engineering and processes that go into making them, and I think that makes me stupid in a way that I should probably fix.

Point being there’s a million and a half things I encounter every day that I just don’t know very much about, and I want to know their secrets!

@ActionAbe, you’re a chemist. That means I know you’re holding out on us bro. You’ve heard me talk about chemistry before.

To me, chemistry is damn near magic. Chemistry is the science which takes hold of the matter in our every day lives and bends it tour our will. It’s fucking sorcery man. I’m sure you have something on, like, ultrapure water, or how water is enriched to have mostly deuterium oxide, instead of the usual ratio.

What thermite was actually invented to do:

Without it, you don’t have high speed rail, and freight by rail would be slow and unreliable.

Which is what makes is it a great and cheap neutron shield.

Is there a Mr Rogers Picture Picture channel?

Is there a Mr Rogers Picture Picture channel?

OMG, I’m going to call my guy at Twitch.tv and pitch this to him.

Here’s a playlist that somebody put together of the various utube vids:
Mr Rogers/ How it’s made - YouTube

Without it, you don’t have high speed rail, and freight by rail would be slow and unreliable.

Like most rail service in the US, for example.

Also, from my understanding, save unplanned cracks and weathering, concrete cement gets stronger and stronger as it gets older. Yes?

Also, from my understanding, save unplanned cracks and weathering, concrete cement gets stronger and stronger as it gets older. Yes?

Something like 85%-90% of the strength you get in a few days. As long as it has sufficient initial water content it can get stronger. Best we can tell though, it’s a logarithmic curve, so the short answer is yes, but it’s the same “yes” you tell your kid when they ask if they can be president someday.

it’s a logarithmic curve, so the short answer is yes

This is an engineering thread; we love technicalities!