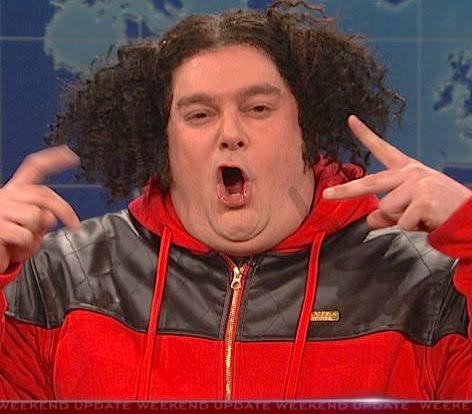 Thank goodness I wasn’t alone in being baffled.

You really have to watch the whole thing to get it…

If you’re going to invoke South Park and this year’s election, a better episode would be one aired October 27, 2004. Animal rights activists stormed a school assembly, denouncing South Park Elementary’s use of the Cows as their mascot. A new mascot must be chosen, by election, and the nominees are “Giant Douche” (Kyle’s choice) and “Turd Sandwich” (Cartman’s candidate.) Stan says that, given such dismal choices, he won’t vote. Hilarity ensues!

Seriously, when you honestly compare Hillary with tRump, it just doesn’t seem fair. Hillary is an actual adult.

Trump has all the wisdom, maturity and diplomatic ability of a six year old on nitrous oxide.

Who would you rather see as president, big shot?

We got two options and a couple of jokes.

We have an elder stateswoman who’s not ideal. We got a petulant child who rapes people. We got a libertarian who can’t name any world leaders, and we got an antivaxxer.

Who would you pick?

I said it before. Just being less shitty or being an adult compared to someone not-quite an adult isn’t exactly the (only) quality in a head of state/government you should be looking for.

I would have picked Bernie Sanders myself. I voted for him in the primary. But he lost. We have two options for who’s going to be the president, and two jokes for who you’re going to waste your vote on.

Do you want someone who might start some conventional wars, or someone who is very likely to start at least one nuclear war, probably a global one.

What I’m saying is, what’s your alternative to Hillary?

She has many years of experience in global diplomacy.

The only electorally plausible alternative is a goddamn nightmare. You can express all the disapproval you want about either of them, but one is clearly better for international politics, and if you vote for anyone else, you’re voting for tRump. The guy who says “why not use nukes?” If he can’t figure out the obvious reasons then he’s literally the stupidest person who’s ever run for office.

You don’t seem to understand that there’s only two choices now.

Your gripe against Hillary is counterproductive to your own wellbeing. If nukes are used anywhere by the USA, then you and everyone, including me and the rest of the USA, is fucked. For the next ten thousand years. A tactical nuke is no different than a strategic nuke under Mutually Assured Destruction.

You don’t seem to understand the gravity of the situation.

I said it before. Just being less shitty or being an adult compared to someone not-quite an adult isn’t exactly the (only) quality in a head of state/government you should be looking for.

Nobody disagrees with this. But we have to deal with reality.

As a “not-exactly-fan” of the USA I’d like to see someone like Trump run the country headfirst against a brick wall.

I don’t share your alarm - someone like Trump could have serious repercussions for the international stage but: 1) I doubt that even the US president can push the red button willy-nilly after having a bad nap or something like that.
2) I live in a country that wisely kept itself out the large conflicts the last 70 years (we had some bad experiences there, you know). We solved our conflicts with checkbook diplomacy and are relatively well liked for our non-committal/compromising stance on the international stage. So I’m quite sure if there is any fallout (pun intended) we will belong to those that are affected the least.

Sure, Hillary is the better choice but compared to Trump everyone is. This election shows the obvious flaws of the US political system like never before. Let’s hope it’s a wake-up call to fix it but who am I kidding … it probably won’t change anything. Next time it’s two Trumps.

If you care so little, you deserve all the fallout you can get.

If you care so much, you should become an american statesman yourself. It’s not easy even amongst the 300,000,000 american citizens generally, and even harder for those who actually care for the greater good.

Even if the US plows into the ground without nuclear war, you’re going to suffer too. We are the global economic leaders. The great recession is just a taste of the havoc we can wreak on, quite literally, everyone who isn’t some kind of self-sufficient bushman completely disconnected from civilization.

I hope you enjoy being so blasé.

We are all aware of Hillary’s faults, but neither Bernie, nor Gary Johnson, nor Jill Stein, nor (fill in the blank) is ever going to be the “perfect” candidate.

There are a couple of problems with “the worse, the better” as political philosophy: first, the nature of authoritarians means that “the worse” always turns out to a lot rougher than anyone expects; second, the real-world effects of “the worse” usually end up being shouldered by the common working person who has (and will continue to have little) interest in political activism – the vanguard class usually has resources that allow it to press for revolution in relative comfort.

Also, don’t be so smug about Europe remaining immune. He may not be able to push the nuclear button, but his crashing the US economy will have global repercussions. So will his climate-change denialism. Also, letting his mancrush in the Kremlin expand his “Russkii Mir” to your neighbours in Eastern Europe without any opposition isn’t a prospect most liberals and progressives in the EU would relish.

Yes, the American system has flaws, but it’s proven robust enough to deliver peaceful and regular transfers of power for 200+ years. Reform the Electoral College, move popular voting in many states to the preference system, and repeal Citizens United and you’ve patched a lot of the current bugs (and probably pushed reform on the corrupt DNC in the process so we have more Sanders types and fewer Clintons).

We have an elder stateswoman who’s not ideal. We got a petulant child who rapes people. We got a libertarian who can’t name any world leaders, and we got an antivaxxer.

Stein is fairly nutty, and has spouted some anti-scientific bullshit, but she’s not an anti-vaxxer. Clinton has also, in this campaign, taken a stance of math denialism, so there aren’t really any choices you can say aren’t delusional. In both Clinton and Stein’s cases, I don’t really know if they’re actually dumb enough to believe the shit they’re spouting, or whether they are calculated lies to achieve political objectives. For all her problems, Stein would be a lot less likely to pursue a policy of endless war, bombing the shit out of civilians all around the world. Also less likely to continue the drug war or keep subsidizing fossil fuel extraction. Even if she were not as competent as administrator as Clinton (and she’s not), just not doing those things would make her a better choice.

This all seems unfair. There’s a segment of Trump supporters who are facing some real economic issues - they’re being left behind by rising income disparity, by a changing economy that had devastated parts of the country, by a world they no longer understand. And in all fairness, they’ve dealt with it by being stupid, racist assholes. You know, to be fair.