Exposition by Vader fixes everything in Auralnauts' "Star Wars Reimagined"

Han Solo believes the Force is nonsense in the original movie, but his co-pilot Chewbacca is a personal friend of Yoda dating back years before he met Han

In the original trilogy they could be vague about time periods. They could be vague about how long ago the Old Republic was, how long ago was the heyday of the Jedi and how quickly or gradually it ended. It was only a couple of lines of dialogue. We were supposed interpret everything in terms of metaphors anyway, and the source material – Hidden Fortress and samurai TV shows in Japan and World War II movies and all that – was not offering a consistent sense of how long ago the “good old days” were.

The obvious solution is just don’t do prequels. Let the mysteries of the past be mysterious. The Star Wars prequels were shit, J. J. Abrams’ Star Trek reboot was pointless, the Alien prequels stopped being any good exactly when the writers tried to stitch them together with canon properly.

The obvious solution is just don’t do prequels. Let the mysteries of the past be mysterious. The Star Wars prequels were shit, J. J. Abrams’ Star Trek reboot was pointless

At least the Star Trek reboot wasn’t constrained to the events of the original timeline so the outcome wasn’t a given from the beginning of the movie.

Leia didn’t show up in the company of a golden deity who clearly warranted a great ceremonial feast. 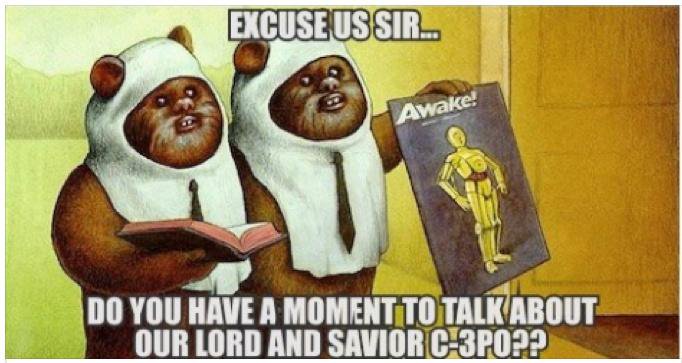 C3PO and Haile Selassie. Two beings who were worshipped despite being uncomfortable with that.

Remember the Ewok playing a drum solo on Stormtrooper helmets after the Battle of Endor? I’m pretty sure they ate those dudes. (I hope Han ordered the salad, that’s all I’m saying.)

Where is your sense of adventure? When traveling you should always try to local delicacies.