Of course the thing that has always bothered my about that scene: “Why would letters of transit for DeGaulle mean ANYTHING in Vichy lands?” DeGaulle was the head of the Free French government which was in direct conflict with the Vichy regime. Petain would have made much more sense as the source of the letters of transit.

Those letters are such horseshit. Irrevocable and undeniable? Come on. I enjoy that Rick is happy to hide them and then turn him over to the cops, who later prove to be his true pals.

I have to say I agree, and it’s not for lack of trying on my part to find a way to excuse the sloppy MacGuffin. There are a whole bunch of internet fan theories trying to make it make sense, but they all come up short.

What we need is a shot-for-shot remake, except this time the Nazis have halfway decent operational security! It’ll be 15 minutes long and pretty grim, but at least it won’t insult the viewer’s intelligence.

(But seriously, the line is supposed to be that they were signed by the Vichy general Weygand, not De Gaulle. That doesn’t get us around the part where they’ll somehow make a pilot ignore all orders not to take off, but it at least makes sense that someone would want Weygand’s signature on such a thing.)

Your criticism (and many others’ similar criticisms) are totally valid.

AND YET… It’s on my short list among the best movies ever. It’s amazing that a movie with so many flaws can be so utterly flawless.

That one exchange is probably on my top ten movie script lines, and certainly one of the all time best disses:
“You despise me, don’t you, Rick?”
“If I gave you any thought, I probably would.”

It’s amazing that a movie with so many flaws can be so utterly flawless.

And, speaking of Bogey roughing up Peter Lorre: (@ 1m08s)

Of course the thing that has always bothered my about that scene: “Why would letters of transit for DeGaulle mean ANYTHING in Vichy lands?” DeGaulle was the head of the Free French government which was in direct conflict with the Vichy regime. Petain would have made much more sense as the source of the letters of transit.

It has been argued that Lorre was saying General Weygand. I don’t know if anybody’s proved it one way or the other, although a look at the original script or play ought to suffice. 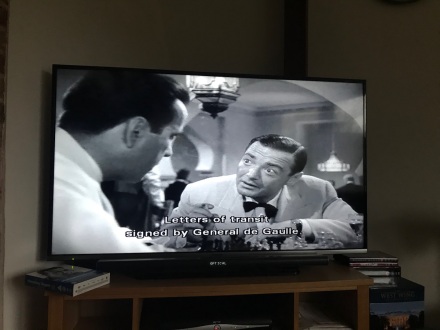 Those Immortal Letters Of Transit, Signed By…

But does he really say “de Gaulle?” Lorre there is hard to understand. It does sound as if he says “de Gaulle,” but he somewhat mumbles.

“You despise me, don’t you, Rick?”
“If I gave you any thought, I probably would.”

Happen to have it on hand.

I prefer a single breasted white shawl collar dinner jacket to the double.

I can imagine the pained look on Jeeves’ face.

The first intimation I had that things were about to hot up was a pained and disapproving cough from the neighbourhood of the carpet. For, during the above exchanges, I should explain, while I, having dried the frame, had been dressing in a leisurely manner, donning here a sock, there a shoe, and gradually climbing into the vest, the shirt, the tie, and the knee-length, Jeeves had been down on the lower level, unpacking my effects.

He now rose, holding a white object. And at the sight of it, I realized that another of our domestic crises had arrived, another of those unfortunate clashes of will between two strong men, and that Bertram, unless he remembered his fighting ancestors and stood up for his rights, was about to be put upon.
…
“Yes, Jeeves?” I said. “Something on your mind, Jeeves?”

“I fear that you inadvertently left Cannes in the possession of a coat belonging to some other gentleman, sir.”

Just watched it with the family last week, first time in a decade or two, and it struck me again what a POS Capt. Renault is… not only a collaborator/traitor and a profiteer from others’ misery, but a sexual predator/opportunist as well. His “redemption” at the end always rankles for that reason. I find Ugarte, what little we see of him, less objectionable.

Unrelated to that point: I’ve posted this here before, but it’s worth rerunning, it’s a good read: Umberto Eco on Casablanca

I’ve always liked “You know, Rick, I have many a friend in Casablanca, but somehow, just because you despise me, you are the only one I trust.” Which I’ve remembered as “I know you despise me, Rick, perhaps that’s why I trust you”

What we need is a shot-for-shot remake, except this time the Nazis have halfway decent operational security!

Might as well colorize it and removed the smoking while we’re at it. Will improve the film immensely

“Take your stinking paws off of Sam’s piano, you damned dirty ape!”

The best thing about it IMHO is that none of them thought they were making the immortal movie. Those involved expected it to be a disaster and the leads themselves wanted nothing to do with it, but were forced by the studio system. One cause of the film’s “magic” was that they didn’t even have the ending figured out and couldn’t tell Ingrid Bergman which guy she was going to end up with because the writers themselves didn’t know yet.

'Casablanca': How a "mess" of a film became a classic

“We weren’t making art,” Julius Koch once said of Casablanca. “We were making a living.” So said pretty much everyone connected with the beloved film, which was first seen by the public on Nov. 26, 1942 — 75 years ago tomorrow. (It wasn’t officially...

They went in to make sausage and came out with a steak.

The young woman pining after Rick and singing with tears in her eyes in the Marseillaise scene was the wife of the great Marcel Dalio who plays the croupier: “Your winnings, Monsieur.” At least, she was his wife for a little while. “An actor should never marry an actress,” I believe Dalio once said.

I couldn’t agree more. I would add Apocalypse Now. By many conventional measures, and indeed by almost any measure, all three movies are deeply problematic hot messes, and yet are in my humble estimation probably the three best movies ever made.

Of course the thing that has always bothered my about that scene: “Why would letters of transit for DeGaulle mean ANYTHING in Vichy lands?”

It’s Peter Lorre. . . how can you not treat him like dirt. He was practically typecast as “that guy.”