I cannot wrap my brain about what is more bizarre…the Florida Man in all his glory or the joking way TSA handles the situation.

The plot chickens as we barrel our way closer to Thanksgiving. For us, it’s a time to be thankful that our officers are always working around the cluck to keep you safe.

It does seem odd; but the amount of attention they’re garnering by just punning through it will get more eyeballs than just drily reporting it as another gun seizure. Granted, everyone already knows it’s illegal to take a gun aboard; but this at least raises awareness that they are at least occasionally paying attention, and that you might be caught.

Will it dissuade the next genius from attempting to smuggle a weapon aboard, turduckened or otherwise? Maaaaybe.

Hey, I can appreciate a pun or two, but the TSA’s reporting on this is just over the top. It verges into tone deaf category when they handle an issue as serious as an attempt to sneak a handgun (and a raw chicken) onto a flight in such a flippant manner.

I sincerely hope that the TSA someday has an official Name and Shame website, where the Daily Winner has their face plastered across it, along with an honorable mention on the evening news. This is the kind of entertainment I’m here for.

It is 100% legal to travel with a firearm. You pack it in a locked box unloaded and declared at check in. You can even use non TSA locks to secure it. (Though sometimes TSA doesn’t know this and cuts into them, violating Federal law

So, I guess the raw chicken is how Assassin Florida Man dispatch(cocks) his victims, but the gun is to make sure the job is done if the campylobacter bacteria doesn’t get you?

The chicken is his inconspicuous disguise.

You pack it in a locked box

with stuffing and gravy.

While swirling clouds of atoms slowly congealed over millennia to craft the carbon that comprises our existence, Florida Man observed the process undaunted by the glacial march of time and hostility of the void. His cold, piercing eyes gazed up from the deep crimson pool of Abel’s blood as the fury subsided in Cain’s heart.

Pleased to meet you, hope you guess my name!

Oh, sorry, I got a little carried away with your rhetorical theme

They sorta do, where they show case things they have confiscated. Though a lot of it comes off as (jerk off motion) “Thanks for keeping us safe, officer.”

Makes me wonder whether this guys possession of the gun was…legally irregular…even prior to the game of chicken; or whether he’s so committed to The Man not being the boss of him that using the completely legal option was unacceptable.

I feel like a jerked chicken joke was missed here.

I don’t know, but even if you were hypothetically not allowed to own a firearm (former felon, etc) I don’t think they actually check that.

But possibly it makes sense why they would try to smuggle it in that way.

I imagine because whomever’s doing it either a) legally shouldn’t be carrying a gun or b) envisions themselves as some kind of commando / cop / protector who is following the “no gun spaces are targets” credo these guys seem to have.

I just can’t get to where the chicken was supposed to hide the gun. How was that supposed to work? And why a raw chicken?

What the cute TSA propaganda fails to mention is that they miss 95% of illegal guns. 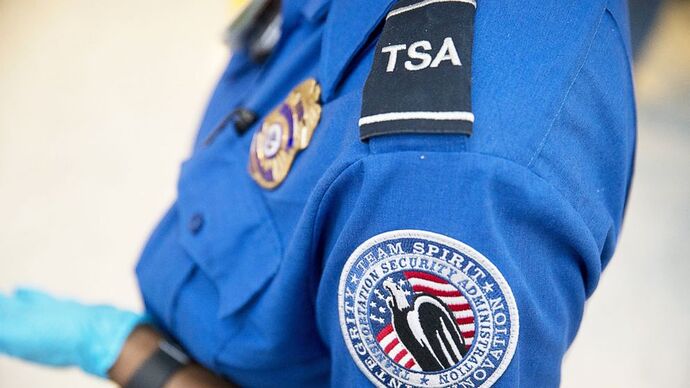 TSA fails most tests in latest undercover operation at US airports

Source said the results were an improvement over the same test two years ago.

Where’s your clever pun for this fowl play, TSA?

I hope the next person who got patted down in that lane insisted that the TSA “officer” put on fresh gloves.