They just fired through their own windshield!

right? i think there are some calls to get the feds to investigate, but given the political nature of the execution… i doubt they’ll take it up

as for the cops ( and corrections officers(!) ) who killed him, im sure they just need more training. we should give them more money so that they’ll be sure to get it right next time. /s

I would definitely support more funding for bullet-reflective windshields…

@scottbudman
Text messages between Elizabeth Holmes and Sunny Balwani today at the #Theranos trial. Holmes: "You are the breeze in desert for me." "My water." "And ocean." "Meant to be only together tiger." Balwani: "OK"
4 Likes
NukeML September 23, 2021, 4:11pm #636

Wow. Nobody ever told me that she was a poet. Now I see why.

Another police reform fail. When are pols going to stop even trying to engage the GOP/GQP on meaningful issues? All do is undermine any attempt at change or improvement, because it messes with their 2022 election strategy:

The two sides couldn't reach an agreement, and something tells me Republicans are just fine with that.

The Taliban are searching for a 2,000-year-old treasure called Bactrian gold.

Many fear that if the Taliban are able to seize the items, they will destroy them in their attempt to cleanse the history, culture, and people of Afghanistan.

The items, discovered by archaeologists in the graves of wealthy northern Afghan nomads in the 1970s, reportedly show a variety of Persian and Greek influence.

"I wept at the complete lack of care for the human beings that are impacted by these decisions," she wrote on Instagram

Fukushima wildlife doing fine without us, thanks very much

Studies of biodiversity around the former Fukushima nuclear power plant in Japan have shown that a decade after the nuclear incident there in March 2011, the local wildlife, at least, is mostly thriving.

This removal of the human population has created a unique environment for wildlife, with nature having reclaimed the evacuated area, and with much of it now dominated by apparently indestructible radioactive boar/pig hybrids, as we noted back in July.

However, other species and ecosystems are also having a great time in the absence of humanity. Surveys have shown that along with the irascible porkers, rare and threatened species are returning to swamps and rice paddies in Fukushima prefecture, with biodiversity also surging on farmland in the area.

I still hold out hope that she will try harder in the future, which is way more than I can say for most congresscritters.

Yeah… me too. My congressman also voted present on this vote, and I would rather him have voted no, too. But he’s more moderate than AOC.

German safety inspection firm TÜV Süd had inspected the dam for mining company Vale, shortly before it collapsed in January 2019. Plaintiffs in Munich are seeking hundreds of millions of euros in damages.

Two follow-ups for the price of one:

First, remember that school district in Oregon that banned BLM and Pride flags? At this weeks football game, their opponents came prepared:

Second, with Oregon picking up a 6th congressional district, there’s been a curfluffle about redistricting resulting in a compromise that heavily favors Republicans. Which they voted against. And then whined about the result, in which they gain one safe district, one 50-50 district, and a maybe, whereas in the past they only had one district that had an increasingly purple hue:

Oregon House and Senate lawmakers on Monday passed Democrats' plan for six new congressional districts on a party line vote and the House passed a legislative districts plan previously approved by the Senate. Both plans now go to Gov. Kate Brown for...

The heavily-armed group is accused of getting into the standoff during the Fourth of July weekend.

“ The defendants argued that they are not subject to U.S. law since they are descendants of a mythic Moroccan nation that once covered much of the world, including America.”

“ Those prosecutors also tried to undercut the defendants’ claims that they were just peacefully traveling along I-95. According to the prosecutors, video recorded during the standoff reveals that the men can be heard talking about a sniper and loading a round into the weapon.

“‘If they start walking toward us, spread out. They’re acting funny and they’re moving funny. Where’s your arm at? You’re a sniper, so get your sniper and go to the front of the van,’” a prosecutor accused one of the group’s members of saying during the incident.”

“ The three defendants arraigned Tuesday submitted dozens of pieces of evidence, including a print-out of the Moroccan flag and a document entitled “The Zodiac Constitution.””

Sovereign citizens. They should ask their embassy for help and assert their rights under whatever treaty exists between the two countries.

The US should start deporting sovereign citizens.

Kilauea volcano has resumed its eruption with lava returning to Halemaumau crater late this afternoon.

Gator trash can guy is from Philly.

Of course he is. 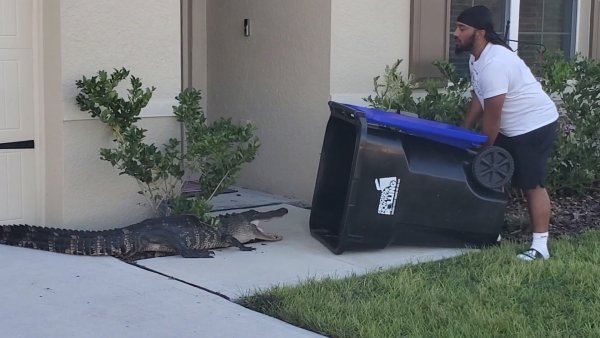 A man captured an alligator using only a trash can in a Central Florida neighborhood. Watch the full video.

More details about the failed police reform efforts, and the organizations really responsible for preventing it from moving forward:

In Loving Memory of Tim Scott

Sen. Tim Scott was once a proponent of police accountability. But after he obstructed police reform legislation, even cops are calling him a liar.

Is it white people?