Directed by Francis Veber. With Richard Berry, Patrick Timsit, Pascal Elbé, Virginie Ledoyen. An unlikely friendship develops between a hitman and a suicidal guy who have both checked into the same hotel for different reasons.

I’m for art and culture too, but I favor the not dying and not spreading part a little more.

if the oscars wants more viewers and relevancy, they clearly need to up their game.

I’m in the performance industry. We’re hurting bad, though not as bad as some.

It’s not about dying for art: the performers aren’t at significant risk. It’s about killing people so that you can make money. I’m proud to say that we’re not going to do that.

There are two stories here. Masiero was protesting at the lack of financial support for culture and arts, not advocating a return to cinemas, that was Stephane Demoustier.

I, at least, didn’t catch this, so thanks @timd 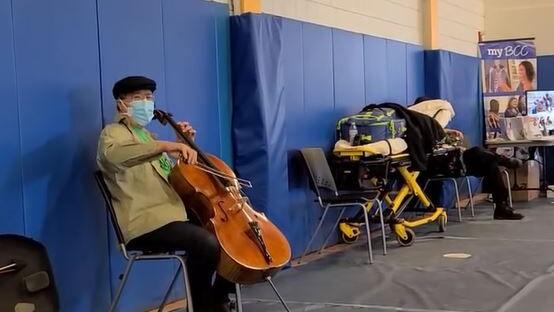 PITTSFIELD — After Yo-Yo Ma received his second jab of a COVID-19 vaccine at Berkshire Community College Saturday, he transformed his 15-minute observation period into a concert for the newly

As mentioned above, I’m in the “Performing ‘Fine’ Arts” industry, though not in a role that involves much interaction with the artists (and less so now that I work from another state). Over the past year we’ve had a lot of retirements and a lot of morale-preserving zoom meetings where people talk about their experiences and where they find the value and purpose in this industry, and I was a little surprised at just how many people put their experiences with Yo-yo Ma at the top of their life lists. Sure he’s the world’s pre-eminent cellist, and sure he’s the guaranteed big draw and cash cow of any season we get him for, but the stories weren’t about that. They were about his incredible generosity and natural leadership, entertaining everyone around him for hours with stories, but stopping constantly to talk to and hear from student musicians.

He recorded a performance for us as part of our streaming video offerings that we’re using to keep our organization going through lockdown, for far less than he could have asked for.

The objective isn’t to die for your art, it’s to make the other bastard die for theirs.

Unfortunately, the coronavirus doesn’t care about her protest, which might have had better results at the beginning of the pandemic aimed at France’s covidiots who helped prolong the shutdowns.

The point that always gets lost in these silly protests is that she’s protesting the right thing for the wrong reason. She needs work and the venues are closed so she’s protesting the government. Almost right. She should be protesting due to insufficient aid to keep people afloat who can’t work during a pandemic, not for making the correct call for public health. If governments were simply helping people pay the bills to get through this (what governments are for), nobody would care that theaters remain closed.

My neighbour is a professional opera singer, and having a performance right now, which is Live-Stream only.

Only the soloists, though, got free tests before the performance. The full orchestra payed for their antigen self-test kits themselves. But they used them.

These people are artists, and they deserve our support. But that also means they themselves, and their families, need to be protected.

I am constantly hearing about the necessary tension between art and commerce where film is concerned. Actors who can’t bridge that divide in their own careers, don’t get anywhere.

Throw in “public health” to that mix, and it’s too much to think about, I guess.

My neighbour is a professional opera singer, and having a performance right now , which is Live-Stream only .

I imagined her singing loudly into her computer next door while you were trying to sleep.

She needs work and the venues are closed so she’s protesting the government.

I don’t speak French so I may be missing some nuances but I’m not sure that’s what she’s saying. She is a successful film & television actress so she’s not going to starve if venues stay shut a while longer. It’s not like she has to wait until the last movie she shot finally gets a theatrical release before she can collect the paycheck.

This is the worst episode of Winnie the Pooh I’ve ever seen!

…the worst episode of Winnie the Pooh…

And I thought Eeyore smelled bad on the outside!

David Niven, the epitome of dignity and class!