And they weren’t even on his lawn in the first place.

Also, I hope the idiot managed to wash off soon after this. Curing concrete is caustic and can give nasty chemical burns.

“took a knife to the truck’s tires”

“The man has been ticketed on suspicion of criminal mischief…The citation is for a misdemeanor based on $500 to $1,500 in damage, Jones said. Should the damage to the trucks total more than $5,000, could be charged with (a) felony.”

"he later found the owner of the pickup truck. It was a son visiting his mother who lived across the street from "

“And the actual property where the truck was parked? It was on the public right of way, Jones said.”

Half-Hearted? I say that is pretty decent. I bet he was in his basement, just about to send the 2:30 off to Yuma, when Mabel came down and told him a truck parked a little on his grass while they were fixing the street.

Must be a nice neighborhood if they can afford to repair with concrete instead of asphalt.

Curing concrete is caustic and can give nasty chemical burns.

Am I getting my gruesome Italian horror directors mixed up; or was it The Beyond that had a particularly memorable alkali caustic disfigurement scene?

Wow. Someone needs a Snickers.

“What are you paying attention for?”

That there is a cranky fellow.

I’m not so sure. Not enough bodies left in the aftermath. 2019’s spirit animal is toothier.

So the old man (define old man) is trying to throw a perfectly good fit and everybody get on his case for it. True he could have done better, Get in the truck and drive around, throw blobs of cement at people, Whatever, but he didn’t have any prep time. I say some slack is in order.

the part that really amuses me is that they were clearly repairing some hole pretty much right in front of the mans house. “rabble rabble how dare you fix mah potholes, dangit!”

And they weren’t even on his lawn in the first place.

Looks like he thought the white truck that was partially parked on his parking strip lawn was one of theirs. It doesn’t seem like they explained it wasn’t their truck until after he finished his attack. Though why he wasn’t attacking the truck that actually pissed him off in the first place…

I think that white truck is, just a little.

I actually have a bit of sadness watching this. I wonder if there could be some issues here for him (diagnosed or undiagnosed).

No sidewalks in your neighborhood? No matter, that right of way line still exists there somwhere.

The best version. (For this purpose, at least.) 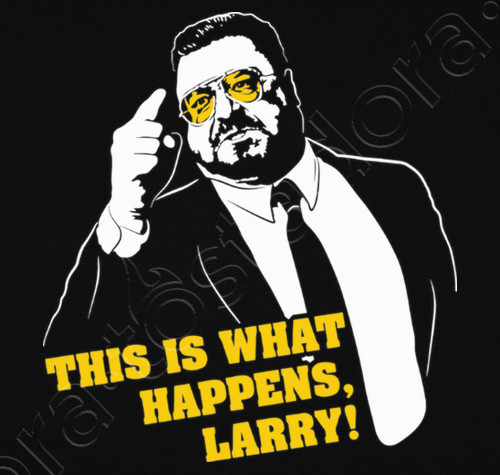