EDIT: This is not (supposed to be) a commentary on Islam. There are many, many, many Muslim movements / organizations / governments which do not stoop to destroying monuments belonging to other cultures. It just so happens that the Taliban is most strongly associated in my memory with the act of using explosives to destroy monuments. Is this not something they have done on several occasions? Isn’t at least one of the instances of their doing this on video? Or is my brain making shit up again?

No. Stop blaming white christian fascists, who have been around for literally decades prior to any similar movement among Muslims, ON brown people. Just stop.

No it isn’t. This has NOTHING TO DO WITH ISLAM.

Vandalism or … < inches away slowly >

“God can do anything.”

Why did it take an all-powerful deity 40 years to destroy a monument that took a couple days to erect?

I admit over a decade ago I watched some conspiracy, illuminati video online and they were talking about how this monument was some kind of blueprint for the new world order or something like that. I’m kind of surprised that this thing has lasted long as it has.

The reality is that the thing was put up by a white supremacist who believed that we were on the verge of nuclear annihilation (being 1980, with the end of detente not that long prior) that would seriously impact the number of human beings on this planet. He was clearly trying to have a set of messages (that included his eugencist beliefs) that post-apocalypse generations could use as a guide for rebuilding. Still full of eugenicists BS.

“God can do anything.”

Yet, oddly, chose not to help her win the primary…

So blowing things up is an act of God?

God can’t stop someone from shooting up a school, parade, or church, but He’s just all-powerful against rocks.

Why isn’t the -actual- FBI investigating this?! Isn’t this an act of terrorism? Or is it “just” an act of vandalism? Honestly want to know.

I wish! How do you think we got Omicron?

This has NOTHING TO DO WITH ISLAM

In reality, neither does the Taliban. 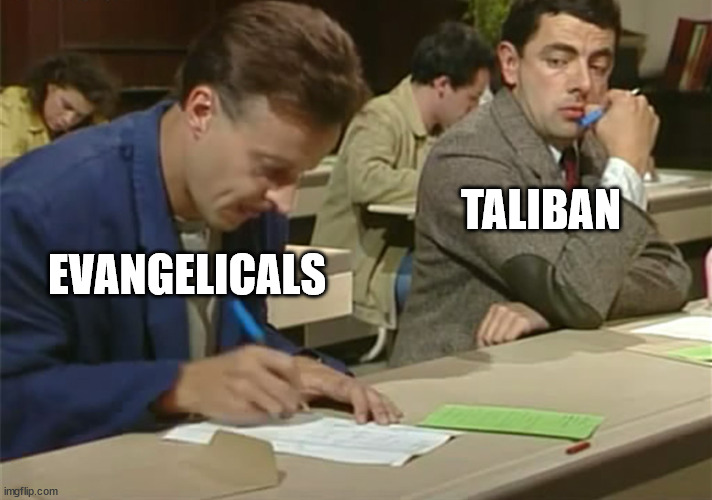 “The Taliban, which also refers to itself by the name of its state, the Islamic Emirate of Afghanistan, is a Deobandi Islamic fundamentalist, militant Islamist, and jihadist political movement in Afghanistan.”

The Taliban (/ˈtælɪbæn, ˈtɑːlɪbɑːn/; Pashto: طالبان, romanized: ṭālibān, lit. 'students' or 'seekers'), which also refers to itself by the name of its state, the Islamic Emirate of Afghanistan,[a] is a Deobandi Islamic fundamentalist, militant Islamist, and jihadist political movement in Afghanistan. It ruled approximately three-quarters of the country from 1996–2001, before being overthrown following the United States invasion. It recaptured Kabul on 15 August 2021 after years of ins The Tali...

That’s why churches never get hit by lightening.

This is another pretty tricky thing that I’m really loath to get into - who gets to make the decision about how is or isn’t of a particular faith? As a non-Muslim raised by Christians, and having almost no experience with Islam prior to reading Malcolm X, I see no reason that I should be the person to decide who or who isn’t a “proper” Muslim. And really, I feel the same about Christians, since I’m not really that either. These are faiths that are shot through with debates about what it means to be the thing, and as someone with no real skin in the game, do I get to impose my own beliefs (however well informed they might be) on others? Doesn’t seem fair to me. I can certainly reject people’s actions as being inconsistent with a free and equitable society, as I do have skin in that game here in the US. I can even make some general judgments about the freedom of Afghans under the Taliban. But it seems to me that living and letting live is a far better way to go about my life, as well as attempting to respect people’s beliefs as long as it doesn’t impact me or mine.