Get this ultra thin RFID protected wallet for just $35

This must have been designed by a person who doesn’t need to keep receipts for an expense account.

My favorite such product was one I saw ads for on the T years ago. Offering a 50-200% reduction in the size of your wallet. Well, I can only assume that after it achieves 100% size reduction, it opens a hole in subspace to get you the next 100% reduction. So basically, it’s a wallet TARDIS: 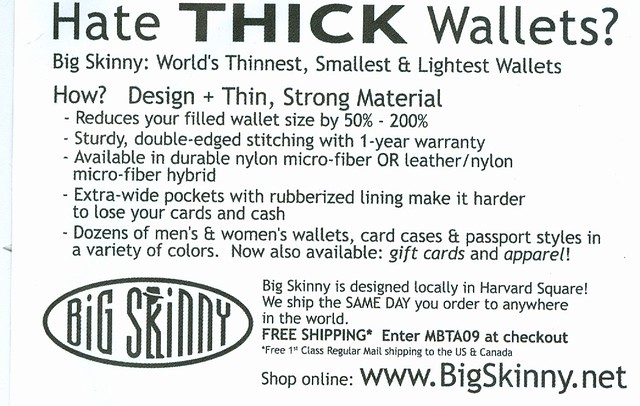 Looks like a clever, well made product that started as a modest Kickstarter for people who, as thaumatechnicia, alludes, don’t put anything other than cards and a modicum of cash in their pocket. The price seems ok if this is a design you are interested in.

However, as to $35 price being a saving of “30%”? Well, the original Kickstarter (just recently fulfilled) says this:

So, $35 is the original MSRP for post Kickstarter sales.

The maker, August Brand, curiously now sells the wallet direct, as the “Nimble” wallet, at the promised $35, but claims it is marked down from $60. Why are there so many wallets on Kickstarter?

Spend much time browsing Kickstarter, and you’re bound to notice: there are a lot of wallets happening here.

Does that mean I am old and obsolete?

Does that mean I am old and obsolete?

I’m thinking it may mean that if you want a wallet you’ll just buy one rather than give money to a project that may or may not result in a wallet within a year.

Unless you actually have a true contactless credit card, you don’t need this. If you have to swipe your card, or insert it into a slot, you’re fine. And if you do have one, it’s almost assuredly a 2nd generation card, which uses a similar type of encryption and tokenization as ApplePay and Android Pay.

Basically, this is a solution to a problem that essentially doesn’t exist.