Either she was too dumb enough to read the room or she went there to intentionally look like she’s the victim to her supporters knowing the crowd would react to her that way.

I hope she gets the care she needs and deserves.

Go with your second choice. She just couldn’t resist.

The angry mob with pitchforks, torches, and coat-hangers should have been a clue, but…

Christ, what sort of asshole would want to provide security for that incendiary fuckwit?
And if they are just randomly assigned SS people, they have my every sympathy.

Showboating for cameras again. The hate was strong today.

She behaves as if she really might have a secret pardon doesn’t she?

And if they are just randomly assigned SS people, they have my every sympathy.

If by “SS” you mean US Secret Service, Congresscritter protection is not part of their mission.

If you meant Schutzstaffel, I’m sure they were quite pleased, even enthusiastic.

The former. I suspect the real latter would have offed MTG by now as being a danger to the movement. 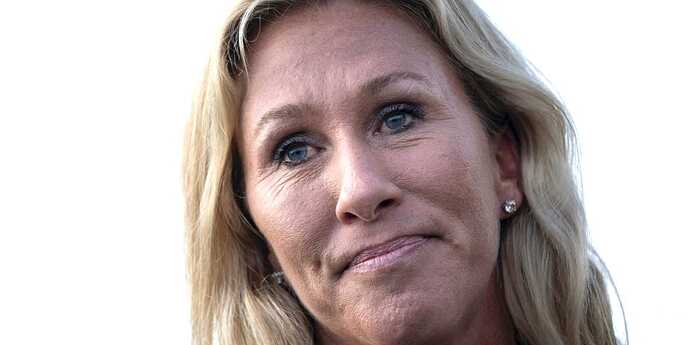 Marjorie Taylor Greene spends more on security than any other candidate

Greene has spent $183,000 in campaign funds to retain a private security company previously used by Kyle Rittenhouse, according to The New York Times.

Probably a real good idea. Sooner or later, real patriots with nothing left to lose are going to start popping out of the woodwork. I am awfully glad I don’t live there anymore-- I suspect the next two or three years there are going to be awful.

Good. Let them be the ones who are afraid for a change, instead of women, minorities, LGBTQ+ individuals, atheists, etc, etc. Cowards, every last one of them. They hide behind their guns and their security details while they talk shit and strip Americans of their dignity, self-determination, and rights.

She is a fragrant gazpacho

That’s all vey funny. But MTG and “mating dance” are concepts I’d like to avoid seeing conjoined, s’il vous plait.

Wishing harm on others is not acceptable.

Not what I meant by the comment but I can see how it my be interpreted that way.

Feel like telling us a different way it could be interpreted?

Fuck off outta here, Empty G. ALL the way off.

Congresscritter protection is not part of their mission.

I believe that the Speaker of the House and others in the presidential line of succession are.