Is it a WoW swag bag?

The entire inventory of the BoingBoing Store?

Anyone believe this woman when she says she was a lifelong Democrat and has only now in recent days switched her party affiliation? Anyone?

Well, yes. She was a hereditary office holder in an obscure backwater. That defined a great deal of Arkansas until the last decade and a half.

Now post a picture of a mechanical keyboard, chunky black glasses, and pomade.

For the record, she’s in Rowan county Kentucky, not Arkansas. There are only 4 blue counties in Kentucky, and Rowan is not one of them. That makes me wonder how being a Democrat would have helped her.

I see her Wikipedia page has already been updated, so we’d probably need to check the Wayback Machine to figure out if she was, in fact, a registered Democrat for 3 decades prior to this week. It might be true, but it doesn’t smell right, you know?

I was following @Ratel’s link in his post referring to Kim Davis as a Blue Lemur Democrat.

The main difference between Kentucky and Arkansas is that Arkansans disapprove of all the incest that goes on in Kentucky.

Also, Japhroaig is going to sic Falcor on us in a moment.

Wait…you’re not talking about World of Warcraft, are you?

Guess What I Just Got…

Me to really hesitate scrolling down in public? 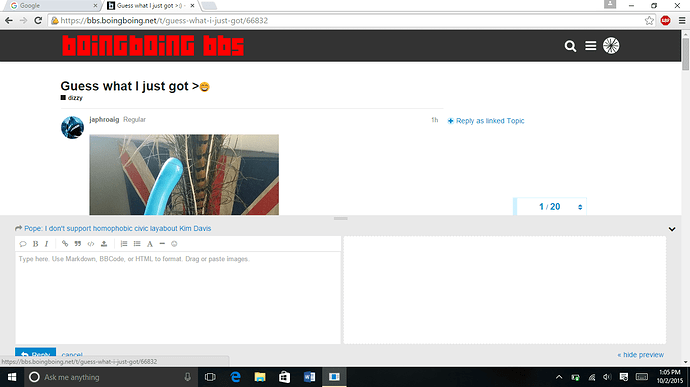 I have a cometely free ticket to the BB weekend of wonder. Anyone can claim it, no strings except one–please don’t sell it. Give it away, launch it into space, go to WoW and become rich and famous. First come first serve. DM me with your email address, and then the rest is up to you. Thread will be updated when the ticket has been gifted.

Based on the balloon animal, perahaps a care package from @Otherbrother…

Would you say that David Clarke, Milwaukee County Sheriff and all around nutcaser is another Blue Lemur?

Fired up about life!!

(My therapist says if I keep saying that it will help

Huh? I haven’t got enough hair for pomade.