Okay; this is the thread for the GURPS Combat Arena.

We’ve got a selection of relatively balanced fighters with an assortment of weaponry, thrown into an arena with whoever else happens to be fighting. Fights are resolved via GURPS rules, using @Discbot for dice rolls.

The fights are resolved via the rules in GURPS Basic and GURPS Martial Arts. If you don’t have access to those books, PM me.

Pretty much any move you can think of is covered in the rules; if you’re not sure if something is possible, just tell me what you want to do and I’ll tell you how you’d need to do it in the rules.

But for a basic idea, the way it works is that fighters take their turns in order of their Basic Speed. On your turn, you get to choose one of the maneuvers listed below:

(that’s the short list; there are also in-between options such as Committed Attack [1] or Defensive Attack [2]. Ask if unsure, it’s simpler than it looks)

Moving: if moving is all that you’re doing, you can move up to your Move statistic. Movement into any of the front three hexes costs 1MP, movement into any of the back/side three hexes costs 2MP. You automatically change facing to match your direction of movement when moving forwards; at the end of movement, you can change one more facing (if you’ve used over half move; unlimited facing change if not).

Many of the maneuvers shown above list move as “step”. This means one hex of movement in any direction, and is the typical amount of movement for a cautious fighter.

Fighting: basically, you have to roll equal or below skill on 3d6 to hit. However, this skill roll can be modified by trying to hit a small target, trying to make two hits in one turn, trying to hit while lying on your back, etc.

If you do hit, you don’t necessarily get through; the defender gets an attempt to parry, block or dodge. Again, they’ll be trying to roll equal or below their defence. Defences can also suffer penalties for posture and so on, and can also be lowered by feints and deceptive attacks [3].

If the defence fails, then we roll damage; cutting and impaling weapons have damage bonuses if they hit in the obvious places. Any injury will cause a short-term skill penalty due to shock; getting knocked below 0HP will result in rapid (but not instant) unconsciousness.

[1] Committed Attack: • Determined: Make a single attack at +2 to hit. OR • Strong: Make a single attack at normal skill and +1 to damage. Movement: Step or two steps. A second step gives -2 to hit, making the total modifier +0 for Committed Attack (Determined) or -2 for Committed Attack (Strong). Movement can come before or after the attack. An attacker who takes two steps can step, attack, and step again – a tactic known as “attack and fly out.” Active Defense: The attacker cannot parry with the hand(s) he used to attack, block if he attacked with his shield or cloak, or dodge if he kicked. He can use any other defense, but at -2. He cannot retreat.

[2] Defensive Attack: This represents a cautious “probing” attack made from a full guard position, such as a jab with a thrusting weapon (including a fist or foot) or a quick, light tap with a swung one. The fighter must use a ready melee attack. He gets -2 damage or -1 damage per die, whichever is worse, but enjoys improved active defenses. If he attempts to grab or grapple, his target gets +1 to defend. Movement: Step. Movement can come before or after the attack. Active Defense: Any. Before the attacker rolls, he must select a defensive benefit. If he attacks with a balanced weapon (including a hand or a shield), he may choose either +1 to Parry with one of his weapons or +1 to Block. He can assign the bonus to the weapon he’s striking with. If he attacks with an unbalanced weapon (one with “U” in its Parry statistic), he may claim +1 to Parry or Block with a different weapon, or opt to parry with the same weapon, at no bonus, despite using it to attack. If he kicks, he gets no Block or Parry bonus but +2 on rolls to avoid a Leg Grapple (p. 76) and on DX rolls to avoid falling.

[3] A “Deceptive Attack” represents an extra-sneaky or fast attack. For every -2 on your attack roll (-4 maximum) you inflict a -1 penalty on the defence roll. Similarly, you can make a “Telegraphic Attack” where you get a +2 attack bonus (maximum +4) in exchange for giving your opponent a bonus on their defence rolls (again. halved, so +4 on the attack gives +2 to the defence).

Sounds interesting. Do we just call dibs on one of the Character Sheets?

And are they really 5’4" with Black Curly short hair, grey eyes and freckled skin?

Sheesh I hope they are wearing jerseys or the play-by-play announcers up in the booths are going to have a heck of a time telling them apart.

Do we just call dibs on one of the Character Sheets?

Yup; if you want in, just say so and pick a fighter. I’ll pick one too (and anybody else who wants in could as well), we set up positions on the arena map and go for it.

Which fighter takes your fancy?

Have you played GURPS before?

It’s been a couple of decades.

The circle/squares we’re standing with our backs to are impassible; any hex more than half covered by the picture is off-limits (same goes for hexes near the arena walls). The stairs at each end (heading down into the walls) give a 3’ height advantage to the higher fighter (+1 defence to higher, -1 defence to lower).

Begin by declaring what reach you’re gripping your halberd at, then what your move is. Make sure to describe very clearly exactly what hex you’re moving to and what direction you’re facing. You’re welcome to Photoshop the map yourself to show the new position, or you can just leave it for me to do and upload; either is fine.

BTW, I’m on Australian time here, and crashing out for the evening shortly.

Grasping my Halberd for THRUSTING (reach 2), I cautiously take a couple of steps (hexes) and turn slightly towards my opponent and size him up.

(or as much of that as I can in this turn) 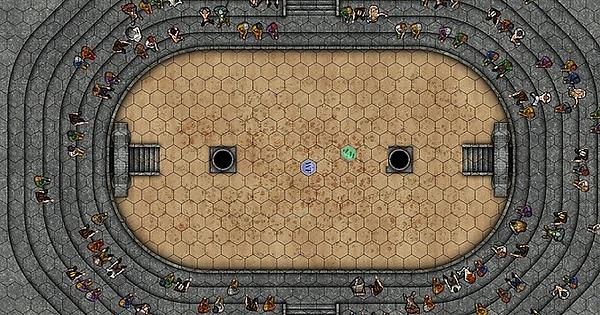 As described, that’s a “Move”. If you actually want to “size up” an opponent, what you’re after is “Evaluate”; it’s basically a melee Aim, but it would restrict your movement to a single Step.

I take an “Evaluate” maneuver, step away and turn to face you.

You can reach me with an All-out Attack, Committed Attack or Move and Attack, but any of those options leave you vulnerable to a counter if I survive.

(BTW, changing reach on the halberd takes a Ready maneuver, but switching from thrust to swing is a free action)

To keep this moving along, I will go with the Committed attack…

What do I need to roll?

What hex are you moving to?

Swing or thrust? Because of the Committed Attack you won’t be parrying anyway, so a swing costs you nothing. If swinging, blade or spike? Aiming centre mass or for a specific target?

Moving to the hex right of where you are at.

Committed Attack (Determined) not deceptive, swinging with the blade at center of mass.

Told you it’d been 20 years since I played

I step forwards and thrust with my sword at your torso.

If I do hit, your Committed Attack means that you can’t Parry (so you’ll need to Dodge), can’t Retreat and are at -2 to defend. So, you’ll need to roll a 6 or less to Dodge.