The number of references doesn’t stop with band names, Star Dust Crusades villains are all based on horror movies.

Guess it’s made up for by the fact that just about every anime and Japanese video game has a Jojo reference.

I didn’t think I was going to like it after watching the first episode, but it really grew on me.

I really loved it, though never finished it (which i need to do so). I view it like Shawn of the Dead, where it pokes fun at a genre but at the same time is great unto itself.

Thank god for Nintendo games and Miyazaki films. They’ve been my safe and happy space since the world went orange.

Miyazaki can do whatever he wants. I got to visit his museum this year and that is one fine tourist destination!

Yeah, Anime is 99% crap. In the non-crap portion, we have the remarkable run of Mamoru Hosoda, whose films “The Girl Who Leapt Through Time,” “Summer Wars,” “Wolf Children,” and “The Boy and the Beast” range from good to great, depending upon your tastes. Nice stories about people in extraordinary circumstances – instead of the usual “epic” Chosen-One conflicts between emotional ciphers standing in for good and evil.

To the anime folks: which auteurs explore the folk stuff, like Ghibli? I loved the mysticism of Spirited Away and the natural themes of Miyazaki’s other films…What other work is as accessible and as charming as that?

I’d recommend Mononoke (not Princess Mononoke, it’s a different anime) and Mushishi. Both are actually a bit similar on some themes, they are both about supernatural creatures. Both series are more serious in tone and are masterfully done. Mononoke may be harder to track down but the art style is based on traditional japanese woodprints and textile designs.

What other work is as accessible and as charming as that?

More along the lines of Kiki, my above mentioned Flying Witch is a great show. Very low key about everyday life and teenagers being teenagers in small town Japan just that witches are real but not everyone knows/notices.

There’s a great article on Miyazaki The New Yorker around the time of “Spirited Away.” In it, Miyazaki expresses astonishment at his animation crew when he asks them “Haven’t you ever seen a snake fall out of a tree?” as he criticizes their work on animating a falling dragon. He took his animators out on nature walks so that they could see what they were drawing in reality.

Similarly, I was watching the movie “Free State of Jones” a few days ago and was jolted out of the film because Matthew McConaughey was shown trying to use a scythe. It was obvious he had never used one in his life. I had to shut off the DVD and go to Youtube to refresh my memory of how a scythe is used properly. My memory was correct. I’ve also seen the same kind of mistake in other recent movies. Actors have no idea how to do simple tasks we all had to do once upon a time - swing a scythe, cut a rope on a ship during a storm, and so forth. The actors don’t know and neither do the directors. They have no experience and are ignorant that they have no experience. There are no calluses on their hands and no tack to their fingertips.

Hey, someone that’s seen it too! Yes, there’s nothing quite like it.

The Wind Rises and Ponyo certainly had a couple of very pretty moments, but it would be kind of hard to recommend them unequivocally.

I didn’t get around to seeing The Wind Rises but i didn’t care for Ponyo at all. I found the characters to be unrelatable or unlikable, i would need to rewatch it to give a proper opinion as it’s been quite a while. The animation was a joy to watch though.
What’d you think of The Wind Rises? I had heard mixed things about it.

Miyazaki is the inverse McRib of animation.

We’ve all heard the theory that the McRib is a function of commodity prices. and that it only comes back when the price of pork is relatively low.

Well, Miyazaki only comes back when pork is sky high. 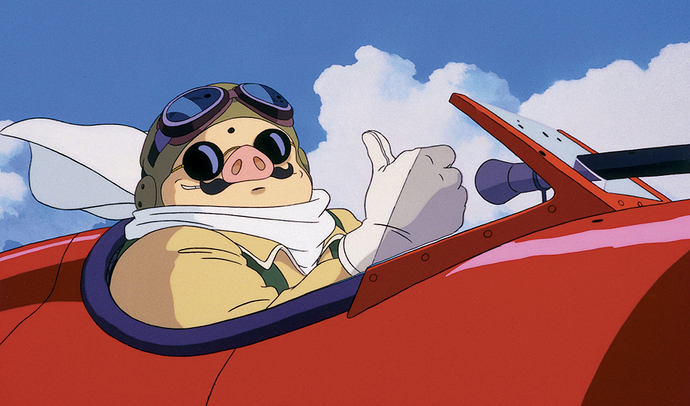 Like I said, The Wind Rises has some pretty moments (Miyazaki does love his flying machines), but plot-wise, it’s kind of meh – an inoffensive, not especially suspenseful, and generally forgettable little love story overlying the looming threat of WW2.

The technically accurate description would be that it is an entirely fictional account of the real man who designed the Zero aircraft, which is a pretty weird starting-off point to begin with.

Well I would think trying to relate to little kids a bit hard at our age.

The kid seemed ok to me. Not the strongest part of the movie but yes, i agree on what you’ve said. However every other character in the movie i had more issues with. Still i hope to make clear that i know the movie wasn’t for me, so despite me not loving the movie i’m not one to tell anyone not to see it.