Originally published at: Here are 36 cities that will be the first to be submerged as global water levels continue to rise | Boing Boing

Except for 2 cities in Texas in the first list, all of the other cities listed are on the east coast? How does the west coast manage to escape the rising tide?

Both St. Simon’s and Tybee are on the list… And Hilton head…

I guess everyone should visit those places before they’re gone.

At least watching Mar-a-Lago sink beneath the waves will bring a tiny bit of solace in a very dark timeline.

I guess everyone should visit those places before they’re gone.

That was my thinking as well; my mentor has been predicting the disappearance of the Florida Keys since back when I was still in my 20’s.

I admit that I am also shocked that no California cities made the list… yet.

Executives in the real estate industry tend to vote for and donate to Republicans. A large reason for that is the latter’s willingness to continue to deny the gravity of the climate emergency.

How does the west coast manage to escape the rising tide

Destroyed by earthquakes before the water gets high enough to matter.

In all seriousness though, the west coast is mostly mountains or the foothills of mountains, right up to the ocean, so the cities that are built on the coast tend to be up a bit higher than the “barely inches above sea level” that many east coast cities are built at.

Except Vancouver apparently, the only thing high up about that place is the cost of property.

I admit that I am also shocked that no California cities made the list… yet.

I think the melting icecaps are supposed to have a bigger effect on the east coast? I’m sure there is a science reason as to why, but I’m guessing it has to do with the location of melting icecaps or breaking off ice sheets?

East Coast cities have a lot of land that was dredged and filled out of marsh and swamps. That’s all going back under the water when the sea comes for it.

Jakarta is not only at risk from rising water, but sinking land. It’s built on aquifers that it drains for its own water.

How does the west coast manage to escape the rising tide?

I’m assuming that it has something to do with the current elevation above sea level of cities of this size as well as an existing susceptibility to coastal weather events like hurricanes and storm surges.

Kim Stanley Robinson does describe a massive flood in L.A. in his Ministry for the Future, caused by a freakishly powerful atmospheric river. The excerpt is at this URL (extremely janky – I could only read it by plugging it into Pocket):

In an excerpt from his new novel, the author drowns La La Land.

There have been floods in West coast cities, but they seem to originate in mountain rains and snowpacks rather than in the sea. This is a famous one. 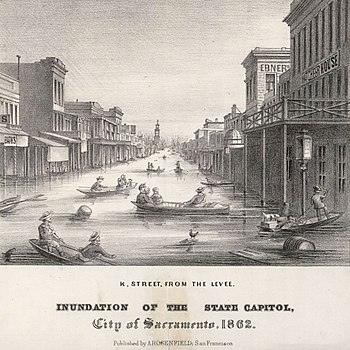 The Great Flood of 1862 was the largest flood in the recorded history of Oregon, Nevada, and California, occurring from December 1861 to January 1862. It was preceded by weeks of continuous rains and snows in the very high elevations that began in Oregon in November 1861 and continued into January 1862. This was followed by a record amount of rain from January 9–12, and contributed to a flood that extended from the Columbia River southward in western Oregon, and through California to San Diego, a...

I was thinking the same thing about the Maldives since there’s temples there that are centuries old that will most likely be gone in a couple decades.

Hey, Ben Sharpiro said you can just sell your house to someone else. /s (insert HBomberGuy talking about Aquaman here)

I don’t even have to see that video clip to start laughing. Ben is such a pathetic dweeb.

Not sure why Vancouver’s on the list. There are definitely parts of the city that are low-lying, but most of it is far enough above sea level that it shouldn’t be a problem. The neighbouring city of Richmond, BC, that’s another story.

Because most rivers run into the ocean, not the other way round… And since they’re on land, they are impacted by various climate there (including things like the current megadrought that’s hitting the SW)…

Its a simple thought but one that seems to be (wait for it) a common sense kind of thought.

Not sure why Vancouver’s on the list. There are definitely parts of the city that are low-lying, but most of it is far enough above sea level that it shouldn’t be a problem. The neighbouring city of Richmond, BC, that’s another story.

I think it’s a combination of parts of the city being low-lying near the coast and its susceptibility to the flooding from the mountains and also from atmospheric rivers, as mentioned above. If the city only had to deal with one of those situations it might not have made the list, but all three probably put it there. That is some going to be some ultra-expensive soggy real estate if we don’t get a handle on the climate emergency.

Because most rivers run into the ocean, not the other way round…

Don’t tell me you’re one of those gravity people. Next you’ll be saying that the Earth isn’t flat.

Next you’ll be saying that the Earth isn’t flat.

How does the west coast manage to escape the rising tide?

Most of the Pacific Coast of North America is mountainous and the elevation increases quickly right off the beach. So West Coast cities don’t even start at the same elevation above sea level that would completely innundate cities like Miami.

Add to that the frequency of tsunamis on the Pacific due to the Ring of Fire, and development on the West Coast moves even further up-elevation.

Actually, no. “Submerged” in this article is relative. Only the harbour areas of the city will be underwater according to that chart. The headline makes it sound like the entire metro area will be under water, but Vancouver is mostly mountainous and only a tiny sliver on the waterfront is at risk in the next hundred years.

Places like Savannah, Georgia and the Florida Keys though, will be erased from the earth.