Herschel Walker held gun to ex-wife's head, according to new ad, but ya think MAGA fans will care? (video)

I don’t care about what delusional cult 45 members think, I care how the rest of Georgia votes.

Agreed. The MAGA fans won’t be swayed ever, under any circumstances. It’s the mushy middle who needs to see this.

It’s the mushy middle who needs to see this.

Exactly. Not the Georgians who are planning to vote for Walker, but the Georgians who might otherwise sit the election out entirely because they don’t thing it matters which one wins. That’s how Stacy Abrams and others were able to flip Georgia blue in the first place.

For what it’s worth, it doesn’t seem to be that tight of a race. Warnock is consistently polling ahead of Walker, with some polls showing a 9-12 point lead.

Some MAGAts care in the sense that they see it as a feature and not a bug. That’s why they’re write-offs.

Doesn’t mean we should relax, especially with the new voting laws in play. The fix can still be in if we don’t show up and vote.

Some MAGAts care in the sense that they see it as a feature and not a bug.

Yep, they love this shit. Abusing other people and telling lies (and getting away with it) - those are displays of power that authoritarian followers love. Tr*mp proved this, over and over again. People thought that pointing out when he was lying would turn off his followers, but they ate it up - they didn’t see it as him lying to them (even when he totally was), but as him “owning the libs.” Similarly his abuse of others was seen as “alpha male” behavior.

Luckily, it’s not about reaching them, as they are indeed write-offs, as everyone says it’s about reaching all the normal people for whom that’s a big turn-off, and they’re the majority. But still, I wonder what would get through to the MAGAts. Even convincing them that yes, they’re the ones being lied to doesn’t work because they can’t admit they’ve been suckered.

Even convincing them that yes, they’re the ones being lied to doesn’t work because they can’t admit they’ve been suckered.

And, as the saying goes, “it is much easier to fool a man, than to convince him that he has been fooled.”

It used to be, in my adult lifetime, that Republicans extolled the virtues of having “good character”, that it was necessary to be honest, be “family oriented”, etc.

Obviously those days are long gone, so I’m not sure why I’m even bringing it up.

Fucking EXACTLY. We can never convince the 27%. But we don’t need to. We just need to get a small number of the other 23% to switch or be disheartened enough to stay home. And as Georgia has already proven, that’s entirely possible.

Jesus. The tone of this post is really weird.

Which is why a new “guns and knives” ad against him, in which his ex-wife describes how the former football player held a gun up to her temple, threatening to “blow my brains out,” will most likely not make a dent in his tight race against Sen. Raphael Warnock (D). Nice try.

It’s like the writer wants Walker to win. So strange.

Does anyone else read his name and mentally translate it to Herschel Wanker or is that just me?

Yeah, Carla, if you’re out there… what sort of ads should the Georgia Democrats be running?

The Republican Accountability and Lincoln Project ads remind us that nominally “less-evil” Republicans bet that they could ride the tiger when they turned their party over to the MAGA maggots . Now they’re beginning to understand what they have unleashed (and that it works against their own cherished wealth and power), they’re madly trying to get off. Methinks they may have waited too long.

But this tape-- did they just discover it? This should have been one of the first things we found out about him…

Republicans bet that they could ride the tiger when they turned their party over to the MAGA maggots .

The weird thing was: they had Trump where they wanted him! All they had to do was impeach him and he’d be ineligible for office. It was a layup. In such a state, unelectable and Twitterless, he’dve been much less powerful. Republican voters have nowhere else to go. Everyone is “as right as right can be.” And if they’d en masse dethroned him, they could have yet harnessed the MAGA stupidity for their own venal purposes. But they didn’t, so they still remain chattel slaves to Mordor, by their own (in)action.

Holding a gun to their wife’s head and threatening to kill their children appears to be what the Bible teaches them about family love and is standard MAGA.

Agreed, but at least the odds are good enough that we shouldn’t despair.

Did something happen in the last week that made them both drop a little at the same time? Or maybe that’s just the inevitable noise inherent in polling. 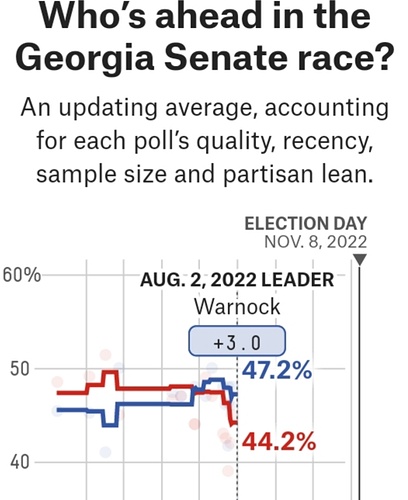 When the ballots are collected and votes tallied, we will have a good idea how many of those voters are the “gun to the ex-wife’s head” type.