Without giving anything away about STID, and without describing specifics therein, can it plausibly be said of this opus that at its dramatic centre we find another instance of ‘some white guy did it first’? Like Marty McFly’s invention of Chuck Berry’s style in BTTF. And numerous other adventures - especially those involving time-travel, which is the only truly reliable mechanism by which history could actually be rewritten. I can’t remember the number of times I’ve seen this happen in movies, so citing only a couple of examples may seem a bit of a stretch, but it does seem to me to be quite frequent. Perhaps a catalog could be constructed?

I have nothing to add but the rote recitiation of the maxim, “If your story involves time travel but is not about time travel, your story sucks.”

I am really not sure what HTTM teaches us in this regard:

Is STTVH about time-travel or is it about humpback whales? This may be important if somebody from an ethnic minority is due to invent transparent aluminium.

Pardon my ignorance, but apparently I am not geeky enough to know that STID means 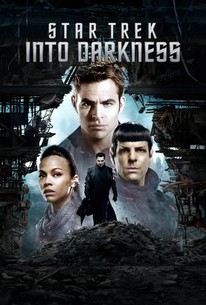 In Summer 2013, pioneering director J.J. Abrams will deliver an explosive action thriller that takes 'Star Trek Into Darkness.' When the crew of the Enterprise is called back home, they find an unstoppable force of terror from within their own...

Personally, I subscribe to the idea that Scott Bakula is single-handedly responsible for most of humanity’s significant achievements throughout history.

Created by Donald P. Bellisario. With Scott Bakula, Dean Stockwell, Deborah Pratt, Dennis Wolfberg. During a government experiment into time travel, a scientist finds himself trapped in the past, "leaping" into the bodies of different people on a...

Didn’t Sean Patrick Flanery invent the Blues or something, whilst in New York? (“Young Indiana Jones and the Mystery of the Blues”) ISTR Sidney Bechet being impressed.

Forrest Gump invented Elvis Presley’s dance moves, but I’m not sure if real-life Elvis got those from black culture or just the music.

I’d suggest that Vulcans were still treated as ‘other’ - even to the extent of being subject to remarks such as ‘pointy-eared’ and ‘green-blooded’ in Kirk’s (and McCoy’s) generation.

I see where you’re coming from, but in practice audiences still see Spock as a white guy who happens to have pointy ears. I think it’s telling that in the original series inter-species relationships were less controversial than Kirk kissing a dark-skinned human being.

Anyone notice how Vulcans went from being Vaguely Jewish in Old Trek to Generally British in New Trek? I wonder if it has anything to do with JJ Abrams being Jewish himself, with different ideas of cultural otherness.

I’ve never been entirely convinced that Marty McFly invents Chuck Berry’s style, thus becoming a “white guy who did it first”. While Chuck Berry may learn the style from Marty, there’s no implication that Marty invented the style. He’s simply reproducing what he’s learned from other musicians, heirs to a tradition that goes back to … Chuck Berry.

Of course, the BTTF plot also turns Chuck Berry into an imitator rather than an innovator, so while it might not be a case of “a white guy did it first”, it does technically imply that “a black guy didn’t”.

Probably not worth overthinking things too much in the case of BTTF, which is a fun, silly movie, with no agenda that I’m aware of. But there are certainly plenty of other movies in which history gets rewritten to make white Western males the prime movers of anything and everything you care to think of.

In the case of STID, I see it not as a case of “a white guy did it first”, but as simply a case of a role associated with a non-white character being given to a white actor. That’s also far from uncommon: the “Legends of Earthsea” TV miniseries, in which the non-white protagonist Ged is played by a white actor is another such case. There are a few reversals of that pattern - in the movie “Thor”, the character of Heimdall (“the whitest of the Aesir”) was played by Idris Elba, much to the fury of white supremacists everywhere. But usually things go the other way.

Of course, the BTTF plot also turns Chuck Berry into an
imitator rather than an innovator, so while it might not be a case of
“a white guy did it first”, it does technically imply that “a black
guy didn’t”.

I guess that’s kind of what happened in Terminator 2. Nobody actually invented the advanced computer processor that led to the creation of Skynet, it was just reverse-engineered by a (black) electronics engineer who happened to come across a descendant of his own design.

You’re being too cagey, if anything! It’s ok to just slam these awful things.

I was thinking this one too. Then I remembered both Forest and Elvis are white. But maybe Forest is just more white than Elvis?

There was no Earthsea TV series. You are remembering a terrible alternate reality, justly banished from existence. Like the Matrix sequels, only more so.

Watching skinheads explode in apoplexy was definitely one of the cheeriest things about Thor, though.

I think, sadly, around the time of Star Trek:DS9 the universe took a hard shift from Vulcans as jews to Ferengi as Jews. I was offended.

Having spent some time browsing around http://judaism.stackexchange.com/ a bit, the insane “Ferengi Rules of Acquisition” started to make sense to me.