How does the iPhone 6s camera compare to every Apple smartphone before it?

If this review shows an improvement over the old camera, then why should I read it before getting the new iPhone?

Your pitch implies that there is some catch that I’ll want to know about, but the blurb goes on to gush about the massive improvement it makes.

What message were you trying to convey?

You won’t believe what they found! The answers will shock you!

I don’t really understand the point of advertising iPhones.

Everybody knows that they exist.

Everybody knows that this year’s model improves on last year’s.

Legions of people in media fall all over themselves to praise and promote them, apparently out of enthusiasm.

My friend has terrible battery problems with the 5 or 5s (before they became reasonable sized) - is that still an issue?

Curiosity, interest in the technology. You don’t have to know how it is better exactly to reap the benefit, but if someone’s already buying it, it’s interesting to know if there are any quirks to it, or how one could expect to see differences in the results.

Battery is a joke because if anyone bothered putting a decent size battery in people would bitch endlessly at this ‘brick’ they have in their pants. Nevermind it being apparently mandatory to have a protective cover, that often as not INCLUDES a battery extender.

iOS9 is supposed to ameliorate that somewhat.

I hear you, but for some reason the wording bothered me.

I must be cranky so, in the absence of a stiff drink, I’ll get some rest.

I just want to know if they really come with gummi bears. Can I get some if I buy an iPhone?

I charge my 5s up in the morning; unless I’m streaming lots of video or playing tons of heavy-CPU games, it’s good all day until late evening. Is that… bad?

Well I only sleep every other night, so when I charge my iPhone overnight, it usually runs out of power in the middle of the next day, which makes me so angry I have to go find a blog post about Android phones and post in the comments how bad their phones are.

How does the iPhone camera compare? Here’s a handy cheat sheet that hasn’t been wrong for a few generations.

Compared to the previous iPhone:
A bit better. You frankly won’t notice but it keeps improving.

Against an older iPhone:
Very nice! You’ll like it.

Against every other smartphone ever:
Above average, probably one of the best choices if you care about image quality.

There you are. You could go and actually test things if you’re a super image nerd (you know who you are), but I’ll bet these guidelines will still be accurate for at least a few years.

My friend has terrible battery problems with the 5 or 5s (before they became reasonable sized) - is that still an issue?

The iPhone 6 Plus in particular has a much bigger battery than the ones before. Not huge in capacity compared to other giant-phones, but much improved in actual use time. Less so for the “small” 6.

Looks like the 6S and 6S Plus have very similar battery life to the previous generation, so these examples should remain relevant: 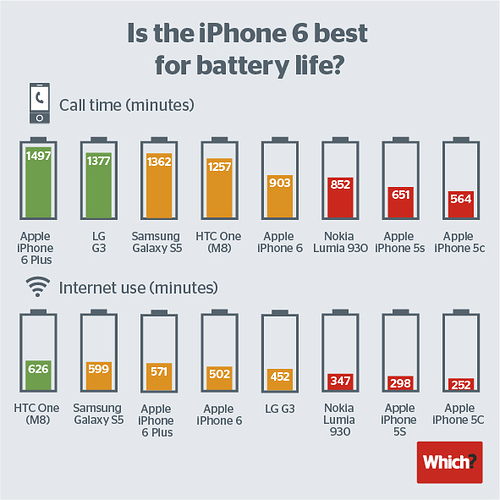 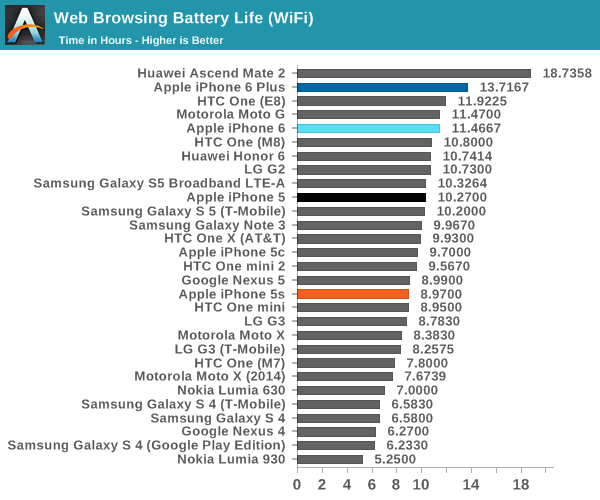 Switching from 8 to 9 has given me an extra couple hours of battery life a day. As a heavy user, I have definitely noticed improvements from ad blockers, low power mode, and whatever other secret mojo goes into an OS update.

I was very surprised when he complained because I had the impression that Apple battery life was exceptionally good.

I’m certain it varies enormously from user to user…

That portrait closeup is just nasty. A sea of artifacts.

It varies massively depending on usage. If I’m just using web, email, and phone via wifi, occasional snapshots etc, I get a good 8-10 hrs of battery life. But if I’m on LTE or 4G, it drops to 3-4 hrs of heavy use. But still, even on standby, I get 6-8 hrs on LTE before a recharge.