How Harley-Davidson killed itself

Stock buybacks with borrowed money to fake profits is one of those things that I can’t believe is legal. It’s so obviously underhanded and unethical yet extremely commonplace nowadays. The airlines used 99% of their Great Recession bailout money doing that, and now we have to bail them out again. Free market, indeed.

Also fuck Harleys and their stupid loud exhausts that I have to listen to at all hours. Those bikes are dumb and people who ride them are dumb. Yah. You heard me, Hell’s Accountants. Come at me, bro.

The salesman who sold me my car used to work at Harley and he hated it. The job was listening to Lynyrd Skynyrd all day and preaching a phony lifestyle to middle-aged dentists.

Vaguely related joke from a friend who used to be a Western Scheldt harbour pilot:

How do you tell the difference between a Belgian ship and a German ship?

It is hilarious because it is true

And with proper paintjob it can look really cute

Here’s mine (on the second photo), without sidecar attached:

Meet Pantone 448 C, "The ugliest color in the world" boing

That was enjoyable. I’ll have to check out more of their videos.

As for the fate of Harley-Davidson, I don’t give a crap. As he points out, they made their bed back in the 80s. They’ve positioned themselves as a premium brand, and the majority of people in America haven’t seen a significant wage increase in over a decade. In fact, most of us are going backwards. Fuck H-D, and fuck any premium brand that may be struggling right now. Lobby for our politicians to do something that actually helps pick up the people who have been knocked down and then we’ll talk about your overpriced toys.

Similarly, Royal Enfield (now made in India) are becoming increasingly popular. This Interceptor is a relatively modern design 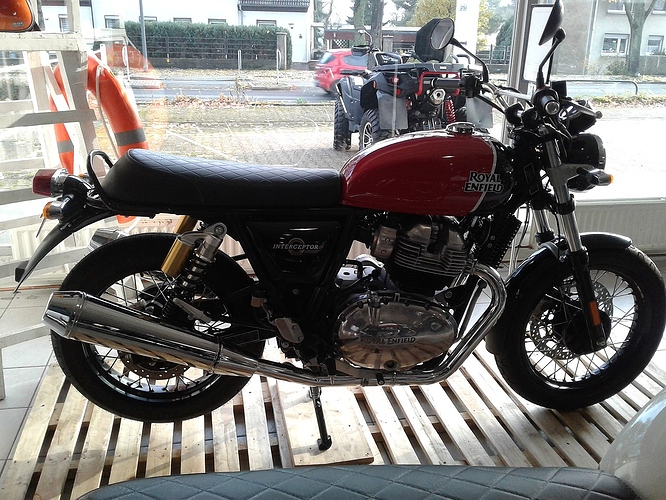 but the Bullet definitely isn’t: 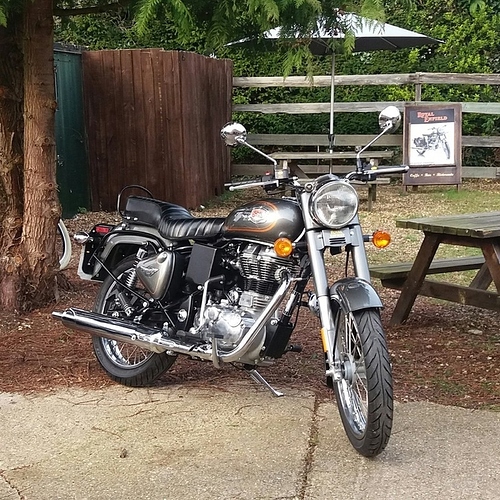 Doubling down on marketing to a disappearing demographic. Kind of Reminds me of the GOP. (Emphasis on the OLD)

I always wanted to have one (Bullet 500)

Someone even made a custom V-twin: 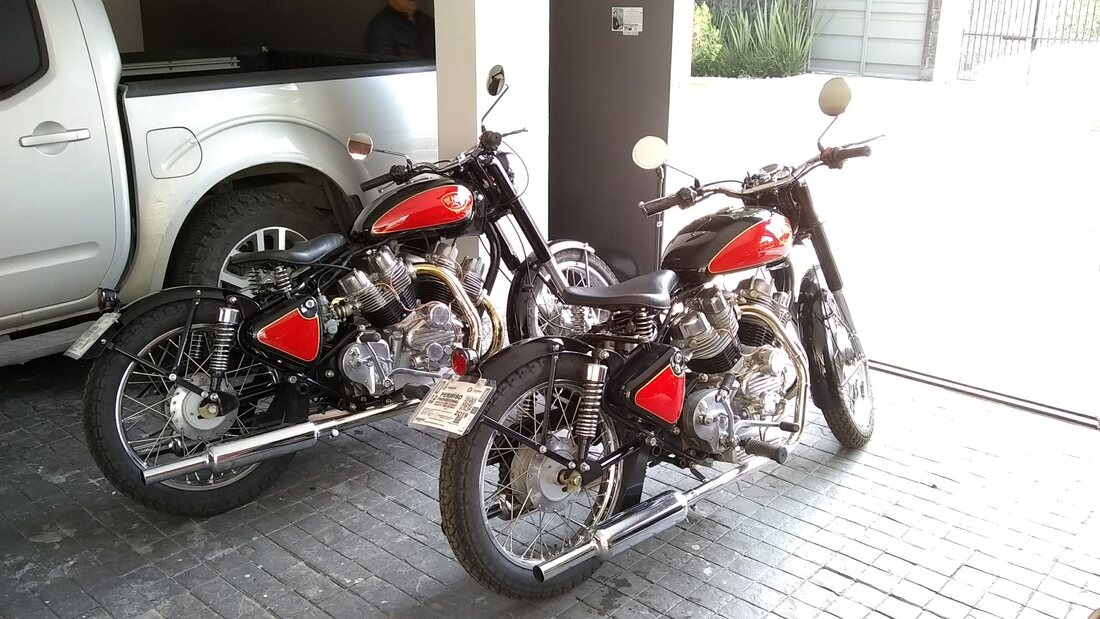 I would guess some what, but as even the video points out sales of other sorts of bikes are strong. Including some styles of bike that Harley technically pushed first.

And the major motorcycle market these days is in South and Southeast Asia. Where bikes that don’t cost thirty grand are often more accessible than a car.

But a lot of the criticism of Harley is directed at lack of safety. Outdated brakes, weight and handling that make things risky. And the whole culture around it is not OK with helmets. Even as a lot of the big, hey now innovations in the industry are things like improved helmets, airbag systems and the like.

So I’d say it’s one of those things where they’re getting it both ways. They’re too expensive and too specifically American to get in on the bulk sales on basic bikes. And too behind the times on safety to appeal to western riders with more money.

This is a conversation we could have had thirty years ago and seen where it was going. A lot of what’s gone wrong with Harley is that they (perhaps inadvertently) built toxic masculinity into their brand identity. Culturally, 1960’s “rebel without a cause” became 1990’s “rebel without a clue.” The iconic look of a HD rider is so over-the-top it’s been an ironic gay stereotype for half a century.

By the 1990s the motorcycle counterculture Harley wanted to appeal to had flung themselves headlong into riding hard for the establishment, dutifully driving their hogs to the Tuesday afternoon “Rush Room” at the local lunchtime pizza buffet. At the same time, a lot of those aging riders were beginning to switch from Harleys (which my sportbike-riding roommates viewed even at that time as a finicky, overpriced, inferior product coasting on marketing an identity to assholes) to Gold Wings, aka “a La-Z-Boy on wheels.” Honda was anticipating the emerging needs of Harley’s riders better than Harley did; meanwhile, the few younger guys lining up to take up Harley’s banner were more likely to want Confederate flags on their bikes than American ones, and that made other potential customers ask themselves hard questions about whether they’d want to be associated with that image.

I have no idea how much of this was intentional. The Harley guy in the video insists his brand isn’t political, but I can think of few more politically polarized brands. I’m pretty sure on a Venn diagram the “Harley” circle would sit entirely inside of the “NRA” circle. If Harley was trying to remain apolitical they miscalculated badly. In that scenario, they themselves bought into a romanticized idea of who their customers were, and let those customers define their brand out from under them. Few companies can boast the kind of rabid brand ambassadors Harley could, and that must’ve felt good, but somebody should have been taking a close look at who those ambassadors were and whether that’s really who they’d want speaking for their brand and gatekeeping who is and is not Harley material.

I suspect they knew exactly who their customer was, but anything they could do to expand their customer base would have alienated the toxic wannabe tough-guy that was already buying. Nobody knew how to make that transition, so they just kept kicking the can down the road quarter after quarter for decades.

A lot of what’s gone wrong with Harley is that they (perhaps inadvertently) built toxic masculinity into their brand identity.

Have you watched any truck commercials? Not lately, of course. Now they are focused on being “here for you in these uncertain times.” But just last year, I gotta say, toxic men appear to still be a sizable consumer base. I’m sure it helps having a toxic man as President, assuring the rest that they are fine people.

It’s like using “beaner” to describe something or someone from Latin America.

Acceptable use of “beaner”:

Group of teens lost in the woods. They’re trying to find the way back to the abandoned cabin near the lake.

Macho guy: this way! I know this rock!

Some other guy after about 1/2 hour sees the same rock.
We’ve beaner before! We’re going in circles!

Have you watched any truck commercials? Not lately, of course. Now they are focused on being “here for you in these uncertain times.” But just last year, I gotta say, toxic men appear to still be a sizable consumer base. I’m sure it helps having a toxic man as President, assuring the rest that they are fine people.

Pickup truck ads actually cover the whole gamut. Plenty of toxic masculinity, but also plenty of family camping with the dog, tech enthusiast, or whatever. Because car companies are smarter than HD and realize that they don’t want to put all their eggs in one customer base. They sell trucks to everyone. It might (or might not) still be short sighted, but nowhere near the level of HD.

But, the toxic masculinity truck culture is another big problem for Harley. You can now get a pickup truck that you can actually carry people and stuff around in, lift it to the sky, badly park it, and generally be much more of an obnoxious prick than you ever could on a Harley while still being, you know, usable. And you are more likely to kill someone else rather than yourself. And you can still fit a fart canon exhaust on it which is really the only trick the Harley has.

If you ride a BMW, Ducati, or something like that, you’re a metrosexual or for the monosyllabic a “fag.”

Or a European. But that’s basically the same thing, amiright, fellow HD owners?

Or the popularity of having all your limbs. Though that might be more of a problem with faster sports bikes rather than HD cruisers. Those probably only break your leg when you fall over at the cross light

Add in terribly built machines that require far more maintenance than better built competitors. The only reason to buy a Harley over other brands is…'Murica.

I’m totally fine with it being legal, I’m just pissed that it works. I thought the market was supposed to be this magical machine full of sophisticated investors that sniff out the true value of a company and assign exactly the right price. Instead, this shit actually seems to work out, at least for some, in the short run.

Stock buybacks with borrowed money to fake profits is one of those things that I can’t believe is legal. It’s so obviously underhanded and unethical yet extremely commonplace nowadays. The airlines used 99% of their Great Recession bailout money doing that, and now we have to bail them out again. Free market, indeed.

Thank Reagonomics for that. Before Ronald Raygun and the GOP changed the regulations, this type of activity was specifically illegal.
As far as H-D kicking the can down the road, they have been making more from licencing their name and logo than selling bikes for a very long time.
They know their actual bike buying clientele want the awful loud engine noise and have designed the mufflers so a piece of rebar shoved up the exhaust will push all the baffles out of the way. Most dealerships do this for their customers on request. 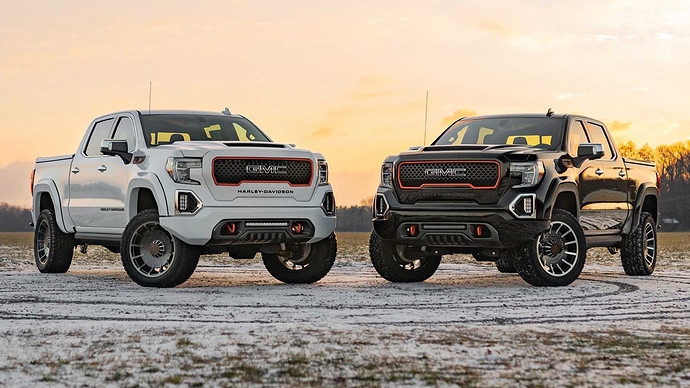 There’s A New Harley-Davidson Truck, But It’s Not A Ford

Harley-Davidson has usually associated its name in the truck world with Ford, but it's breaking the mold by teaming up with GMC for a special 2020 Sierra.

A few years back I watched a large gentleman on a brand new Harley still with its temp tags dump it in the turn after his arrow changed to green. He wasn’t going fast enough to hurt himself and he managed to avoid getting squished, but he and his buddy who was riding alongside him also had a fair amount of trouble picking it back up. There was sand in the intersection. I almost felt bad for him before I realized if he can afford a Harley, he can afford good insurance. Then I went on with my day.

I think they can survive but they’ll have to do it in a way that means not making Harleys as their main brand of motorcycle. They had that chance some time ago if I recall correctly but they shuttered the production line entirely. The thing is that they probably would profit more from just selling branded clothing than bother with more bikes at this point. If they have any cash left, I’d do that plus maybe put in some very long term investment into existing e-bike makers with the hopes that it gives them some cash flow again to restart their manufacturing lines in the long term.