Awww! When you know how it is done, it loses all its sparkle. You’ve ruined the magic for thousands of little voting hearts and minds out there. I hope you are pleased with yourself.

I know I would be.

Sorry, ever since the opening of the russian archives post-1989, it’s been clear that McCarthy was fundamentally right.

I think perhaps you’re mixing up your talking points, which are to defend McCarthy when Julius and Ethel Rosenberg come up, since the archives show Julius was guilty. They also show Ethel was innocent, and was at worst aware but uninvolved. A 50/50 rate of guilt for people being executed doesn’t exactly seem to make anything right. Since the FBI’s investigations were hampered by McCarthy’s interference in the case, McCarthy’s even less right.

Alternately you’re really saying the cables show that Hollywood, the HUAC witch hunt’s main focus, was under the sway of Soviets, which is something I’d be interested to hear more about since I have yet to read about Soviet archives proving this.

I think perhaps you’re mixing up your talking points

Oh thank you so much, I must have misplaced my Talking Point Card.

Hollywood, the HUAC witch hunt’s main focus, was under the sway of Soviets, which is something I’d be interested to hear more 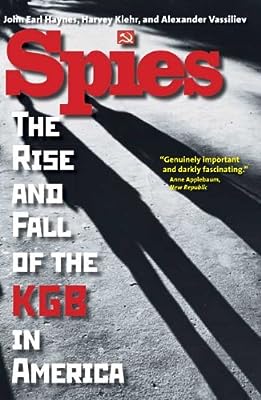 Spies: The Rise and Fall of the KGB in America

This stunning book, based on KGB archives that have never come to light before, provides the most complete account of Soviet espionage in America ever written. In 1993, former KGB officer Alexander Va ... 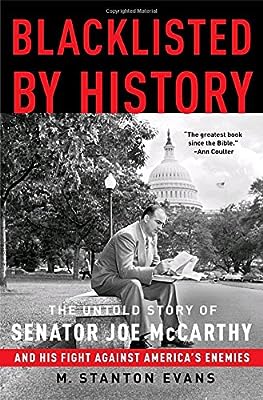 Blacklisted by History: The Untold Story of Senator Joe McCarthy and His Fight Against America's Enemies

Accused of creating a bogus Red Scare and smearing countless innocent victims in a five-year reign of terror, Senator Joseph McCarthy is universally remembered as a demagogue, a bully, and a liar. His ...

What was it in the Russian archives that shows Cohn to have been right? Oh, wait, I see. You don’t like the facts so you’re trying to change the subject.

Save “sorry” for when you really mean it.

Praise for Blacklisted by History:

“the greatest book since the Bible”
-Ann Coulter, Creators Syndicate

Published by Crown Forums, who also offer such works as Liberal Fascism and Coming Apart: The State of White America, 1960-2010

Was Hoover a cross-dresser, or Cohn? It’s possible, right?

Looking at his face, I think that Hoover did everything cross; irate even.

On June 19th 2016 I wrote an on-line comment in the NY Times that mentioned “Trump’s ex-lawyer, mentor and Joe McCarthy’s right hand man, Roy Cohn” using those exact words. On June 20th was this Times headline, “What Did Donald Trump Learn From Joe McCarthy’s Right Hand Man?” The Times did not print the comment. The Times didn’t want some comment fella using the same word hooks? Or something.

I’ve been wondering for months in various comment sections why Cohn was hardly ever mentioned in connection to Trump? Was the media still afraid of Cohn and or Trump even 30 years after Cohn’s death?

I am unfortunately old enough to remember Barbara Walters making her 1950’s TV debut (CBS?) accompanied and introduced by “millionaire lawyer and playboy, Roy Cohn.” Cohn was a secretive gay kingmaker and fanatic old line Northern Democrat John Bircher in the days of Dixiecrats both before and after they all became Southern Republicans.

The gif pics of the 70 year old Trump in this article are priceless as is the pic of Cohn and McCarthy forehead to forehead.

Andrew Sullivan in his old blog peering into the right wing rotting entrails of the fairly recent book “America Betrayed” by Diana West dealing with Red Scares or commies here there in our hair and underwear.

Sullivan: “So do yourself a favor and get a glimpse of the insanity now dominating what was once a vibrant intellectual culture by reading Ron Radosh’s devastating review of the book. Front Page offered West equal space to respond but she wisely refused (see her position here). After reading Radosh, you realize why. She’s got nothing. But she still has much of the movement right on her side.”

Radosh: “As a historian I normally would not have agreed to review a book such as this one. But I changed my mind after seeing the reckless endorsements of its unhinged theories by a number of conservative individuals and organizations.”

“These included the Heritage Foundation which has hosted her for book promotions at a lunchtime speech and a dinner; Breitbart.com which is serializing America Betrayed; PJ Media which has already run three favorable features on West; Amity Shlaes, who writes unnervingly that West’s book, “masterfully reminds us what history is for: to suggest action for the present”; and by conservative political scientist and media commentator Monica Crowley, who called West’s book “A monumental achievement.””

Radosh was once a Marxist in his youth which means he can easily be dismissed or ignored as a credible historian by conservatives who never ever forget. Radosh is probably considered another closet liberal trying to “rewrite history”, the default setting used over and over.

There was indeed an organized kgb-directed communist campaign to infiltrate American institutions, including Hollywood.

Well then they were bloody useless at it because they accomplished nothing, and McCarthy might have been right but he was still bloody stupid and he accomplished worse than nothing. The whole thing was a big stupid farce.

The aside about the fake cufflinks is really an object lesson in everything Trump is about. Turns out that, like chapter 11, he’s pulled that trick more than once, too

Andrew Sullivan in his old blog peering into the right wing rotting entrails of the fairly recent book “America Betrayed” by Diana West dealing with Red Scares or commies here there in our hair and underwear.

Peering Into The Rotting Entrails Of The Intellectual Right

Is there a point at which a “movement” actually hits bottom? You know: like an addict? My only true experience with this was observing the British left in the 1970s and 1980s, reacting …

I lecture on the Cold War and also on terrorism, I am an educator at the Pritzker Military Museum and Library. Did you know there were two lists? Everyone on Joe’s second list was arrested.

There was a roomful of reporters and none reported any number from Joe’s speech in Wheeling. One article did and in a libel case the journalist admitted he hadn’t been at the talk and he, the writer just put in a number.

Tydings gave a press conference during hearings against Joe where he held up a record and stated that he had a recording of Joe saying a number ( I think it was supposed to be 205). He too was asked in a libel trial if Joe hadn’t said it, what was on the record? He admitted the record was music, he had no such recording. If anyone in the press had asked to hear it, the manufactured evidence would have been discovered.

They made up evidence against Joe.

There were two lists. The first Joe did not want made public but he was overruled by the committee. Because the second list was Soviet agents within CIA, that was obviously not made public. Everyone on that list was arrested, traded or deported. If any were executed I don’t know about it and have found no evidence any were. They were probably more valuable alive.

The only fake name was the one planted by CIA maniac Jesus Angleton on orders from Dulles as revealed in the CIA declassified article on The Pond. Angleton convinced an agent in The Pond, our only truly and effective spy hunter organization to give Joe a phony dossier that CIA had made on a still classified General, though it is easy to find as everyone from William F. Buckley to Ayn Rand would denounce Joe for making the allegation.

That shook Joe up and made him question The Pond reports and names he’d been getting, and it was right before the Army hearings.

Joe had told Dulles that he wanted hearings on CIA after the Army hearings and CIA was deathly afraid Joe would discover he had hid over 200 Nazi Intel officers and heads - giving them passports, money and in some cases jobs within CIA. The man who was the architect of the mechanics of the holocaust was one of these men and he was sent to West Germany to head German Intel there. This was an illegal action, and would have been a goldmine for Soviet propaganda.

Back in those days government agencies actually ended so if either the nazi story or what CIA did to Joe had come out my guess is Eisenhower would have had to end the agency.

Here is the bizarre footnote to the story: Angleton would be told by a trusted friend that there was a Soviet mole ( agent planted within our agency) and he began a disturbed search which crippled CIA. Several hundred agents were placed under house arrest, some were sent to mental institutions and signed in against their will - all were given massive doses of LSD and interrogated, some were even tortured. Domestic CIA ground to a halt as the search continued. This was very bad as domestic CIA was ignoring warnings from analysts about the expansion of the war in Vietnam and why it was a really bad idea.

Angleton accomplished what they feared Joe would accomplish, bring CIA to a halt. It would take Nixon to revive CIA by allowing it to spy on the Vietnam protest movement. The mole within CIA/ It turned out there was no mole in CIA. The trusted friend who told him there was, turned out to be the Soviet agent. Just one of many victories by the Soviets over our nation and Intel.

P,S. - Why did Hollywood Reds decline to answer if they were party members? Everyone declares their party affiliation in primaries, it is not a secret. The lawyers knew they would never get away with that, and the CPUSA ran candidates. Because from 1938 until mid 1941 the Hitler- Stalin Peace Pact was in effect. This was the period by the way when France was invaded and England was being bombed. Jews had been forced to register and wear stars. All of which the CPUSA supported. The German American Bund worked with the Hollywood Reds on strikes in the defense industry on the west coast. At a rally Dalton Trumbo declared Hitler was “the savior of the Jews”. At the same rally, a German American Bund member also spoke! Better to get one year for contempt, than face the death penalty for treason