How to peel a potato without sacrificing any potato

I pretty much only eat baked potatoes out of hand with no seasoning or condiments. Makes for a great snack, especially yellow or red potatoes.

Are you left-handed, by any chance?

A lot of peelers used to have the sharp blade only on one side, so lefties had to use it “backwards”.

Guess how I know that?

So, I’m a weird shaped mutant. I have big hands and long fingers. When peeling potatoes my arms don’t move.

I grasp the tater in my left hand.

The thumb of my right hand goes on the end of the tater closest to me.

My right index finger rests on the tater to keep balance.

I then use my remaining three fingers to grasp the peeler, and cut starting from the end farthest away towards me. This is so I always pull, never push.

Rotate while cutting. Never use more than your fingers, and a little wrist action.

I can get a skin off in one piece. 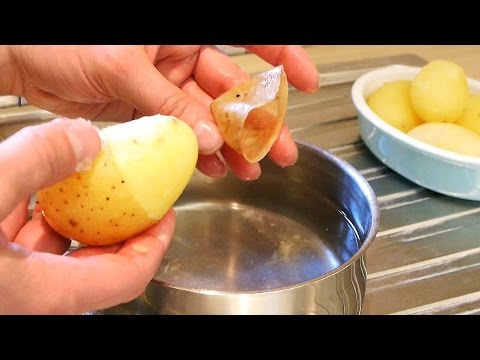 Do they look delicious?

These [“Apple Peeler, Slicer & Corer”] are $18 from Amazon. I wonder if they work on potatoes?

They don’t work on USAian spuds, but they’re fine for taters from France.

But, when cooked this way the glycoalkaloids (toxic poisons) move from the skin to the insides of the potato. When the potato is raw, they are just in the skin, and easily removed via peeling. Also, while the peel does have more fiber, the business about having more vitamins and minerals is a myth. Overall, it is safest to peel before cooking.

Also, since these glycoalkaloids inhibit the breakdown of the types of anesthesia used during surgery, potatoes should not be consumed for three days before surgery.

Why does he have the right burner on the whole time?

I did some googling to figure out whether or not your claim had any basis, and it appears you’re right: Potatoes prolong anesthetic action.

The more you know!

Wow, who knew! Well, not me. Though this source says they’re right UNDER the skin. And that peeled taters should be cooked right away.

This trick doesn’t work with apples, but there’s a great gadget that fucks apples right up: 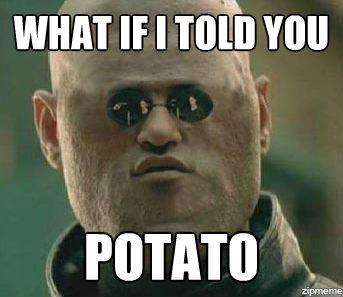 These are $18 from Amazon. I wonder if they work on potatoes?

also this one seems to remove minimal potato:

Also: Jezus tapdancing christ, the stabilization on that Kenwood peeler video is making me seasick. Why the hell didn’t they do a crop to keep the thing from looking like it’s embedded in jello?

That second video is a great reminder of WHY it’s important to wash produce!

I had some purple potatoes once. Like, purple all the way through & stained your hands like beetroot. They were the potatoiest potatoes ever. Delicious.

You’re awesome. Check this out: