"I grew up in the Westboro Baptist Church. Here's why I left"

Well, this certainly speaks to the “punching in the face of a Nazi” post on Boing Boing a few days ago. I criticized that earlier post, but I very, very much enjoyed this post, and I think it elevates Boing Boing’s discourse.

I just listened to this and was so impressed. I have been studying about Nonviolent Communication and communication lately and I thought she made a beautiful case for engaging with people with love.

That gave me the collywobbles something fierce.

“I grew up in the Westboro Baptist Church. Here’s why I left”

Her first sentence answered the second one.

The talk is interesting, but her delivery is a bit dry. She didn’t sound nervous so i give her props for it, but she could’ve been a bit more relaxed.

Her story sounds familiar though. I wonder if she’s the one member whose story i had read about on some article in the past year or so.

She makes a lot of good points. The one that got me was that you still have to make your argument; don’t assume that your position is so good and right, it’s obvious. Wasn’t quite expecting that.

Now, I wonder if there is anyone that went in the opposite direction, grew up not part of this organization, but was moved enough to join up with the WBC.

She relaxes as she goes through it and kinds of builds up.

Think she could’ve been more relaxed but i’m definitely not taking away from the message. Plus i’m not sure i have the guts to go to TED and give a talk

Probably could be. I’m thinking that growing up in a bastion of hate probably makes you more scared to be on stage because people are not naturally inclined to like you when you are like, “Remember those horrible awful people who held up awful signs at soldier’s funerals? That was ME!”

The talk is interesting, but her delivery is a bit dry.

So? That seems like a pretty superficial critique to me. She’s not a professional actor, just a person communicating a difficult story with some profound and pertinent lessons for our era.

The talk is interesting, but her delivery is a bit dry. She didn’t sound nervous so i give her props for it, but she could’ve been a bit more relaxed.

Uh, maybe because she’s been in a cult for several decades instead of public speaking classes.

It is a pretty superficial critique, i was immediately aware of it even before i wrote anything. I felt like giving my honest opinion on what i thought.

Oh wow - yes this! I’ve pointed out pretty much everything she has said through out my Facebook feed. I’ve combated some of the attitudes she talked about here and elsewhere. It echos the CGP Grey video I like to spam. If you want to jump into the meat of it, I suggest ~7:20.

I really liked the idea of approaching someone from a neutral position. So often if one doesn’t toe the party line, they are called out as the enemy. But it resonates with me because I think that is something I have done for a long time. Like many people I was teased and picked on when younger. So I think I am willing to a give the average person a fair shake and not assume they are an asshole right off the bat. A tendency to see people more neutral until I know otherwise.

I feel like I need some fancy gif here, but I’ll just leave it at this.

Jeez. It’s not like she was wearing tights as pants.

I’ve been studying about communication techniques. If you are interested in her ideas and want to buy the book, there is a great book on this subject. It’s a very popular book and easy to find in your library. I checked it out on my Kindle. 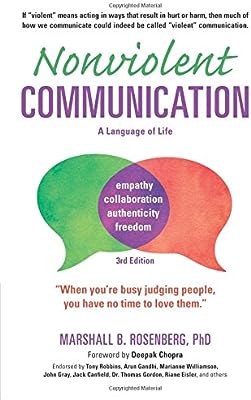 1,000,000 copies sold worldwide • Translated in More Than 30 Languages. What is Violent Communication? If “violent” means acting in ways that result in hurt or harm, then much of how we communicate—ju ...

Not really a direct comparison.

One is a group of super hateful legally trained trolls trying their damnedest to get a violent response so that they can sue and continue to rake in the $$$. (i.e. punching is the absolute worst response)

The other is a group that willfully promotes genocide and does, on occasion, actually kill people…

The New Yorker had a great feature on her a few years back.

She was a prized daughter of the Westboro Baptist Church. Then she started to question her faith, one tweet at a time.

Bonus: yet another great example of CWAA:

Well, let’s just say that it is nice to hear and consider two sides of every issue.

Converting crazed bigots into decent people is a worthwhile and admirable thing. And, as described here and elsewhere, an open and empathetic approach is the method most likely to succeed.

But it’s completely fucking useless as a political strategy.

“Most likely” is not “certain”. Even with this approach, most attempts will fail; even with success, the time and effort involved render it impractical for mass application.

By all means, if you have a friend or relative like this, go for it. But when it comes to politics, you don’t beat bigots with persuasion; you beat them with numbers.