"I thought of Al Capone": Sam Donaldson on Trump search

I mean, Al Capone was a cold blooded gangster, but I don’t think he would commit actual treason… just saying…

But I saw his interview last night. Nice to see him still kicking around.

Also, by all accounts Mr. Capone knew how to actually make money in the hospitality industry; even if that involved a little of the old regulatory arbitrage from time to time.

Anything that keeps him in prison until he dies is just fine.

I don’t think he would commit actual treason 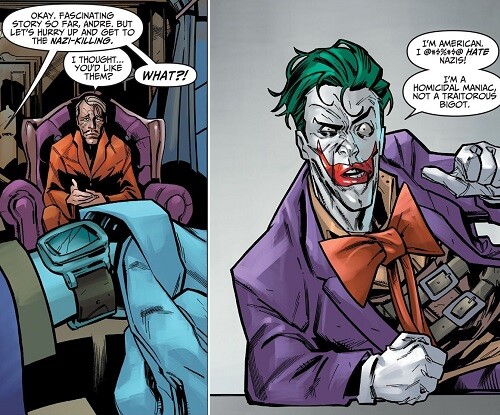 The Joker might be canonically insane, but he isn’t stupid. He knows exactly what the Nazis would do to someone like him.

I mean, Al Capone was a cold blooded gangster, but I don’t think he would commit actual treason…

If committing treason had low risk, huge profit potential, and “everyone” was doing it (like bootlegging), Al Capone would do it in a second and be a top traitor at that. It’s not that Capone had morals/ethics, it’s that there is no profit/ego incentive to treason. The risk/reward is ridiculously high.

To Trump, the risk is perceived by him to be near zero (he can publicly murder someone and get away with it). And we have no idea what his reward is, but given his ego, just retaining “valuable stuff they don’t wanna let me have” might have significant ego reward value (let alone if he actually wanted to somehow monetize it). With Trump, the risk/reward is ridiculously low. Can’t you hear him? “You’d be a chump to not commit treason, Jared!”

Way behind the curve, the Dorito has been making everyone think of Al Capone since at least 2016

Say what you will about Al Capone, but he did make Chicago Great Again. /s