I will get fat eating retro candy

As a New Englander, I have an odd love of the occasional Moxie. It’s flavored with gentian root, so it has the flavor of old-timey bitters and/or medicine (depending on whether your medicines ever included gentian root, I suppose), but I enjoy it from time to time. Hard to explain why. Maybe for the same reasons that Boston people enjoy eating ice cream in the dead of winter. We have a masochistic streak.

Where old timey candy goes, the ones I squeal happily for when I see them are Valomilks. dark-chocolate Mallo Cups (hard to find but worth it!), Zero bars, and Skybars.

I’m like that with Birch Beer. So much better than root beer! Its birchy!

Moxie is the awesome. Just leaves more for me!

Mmmm, clear and bark-flavored! I love the stuff. My favorite is from the Bearskin Neck Country Store in Rockport, which couldn’t be more New Englandy if it tried.

One thing I really miss from my youth is Fan Tan gum. The flavor was unmistakable and I’ve never found anything else that tastes the same. I still crave it.

I’m surprised that anyone would be desperate to find mallo cups or Zero bars; here in VA you can find them in most grocery stores (the same is true for Ohio).

Maybe distribution is limited to just a few regions?

Dagnab it, no Black Jack or Beemans gum. I could usually find some up to a couple of years ago, but now I fear they’re gone forever.

There’s a store an hour away from me that stocks only strange and imported pop. (that includes Cherry Coke Zero, which for some reasons we cannot get in Canada! $15 for 12 cans!)

But they carry Crush Birch Beer and Pineapple Crush, both “imported” from Newfoundland. (Hilariously enough Wiki tells me that both Crushes are also available in Fort Mac. Which goes to show how many NFLDers live/work in the tarsands!)

Also they have these, that I did not buy, but I really really wanted to… for reasons.

I love that place.

I think a NYT article on it just came out today. Or yesterday. 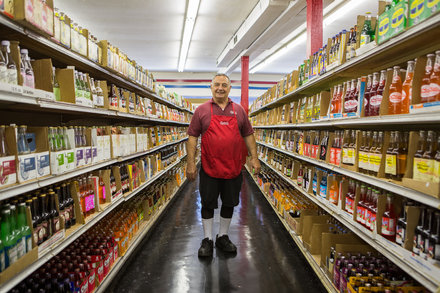 Galco’s in Highland Park, which opened in 1897, carries over 750 varieties and draws visitors from around the world.

[quote=“Missy_Pants, post:9, topic:78940”]There’s a store an hour away from me that stocks only strange and imported pop. (that includes Cherry Coke Zero, which for some reasons we cannot get in Canada! $15 for 12 cans!)[/quote]Aye, so infuriating, that. I keep meaning to ask someone travelling to the US to bring back a case for me.

[quote]But they carry Crush Birch Beer and Pineapple Crush, both “imported” from Newfoundland. (Hilariously enough Wiki tells me that both Crushes are also available in Fort Mac. Which goes to show how many NFLDers live/work in the tarsands!)[/quote]Also as noted on the wiki, for some baffling reason, Crush Cream Soda in Quebec is clear, whereas in the rest of the country it is only available in pink. I’m pretty sure they taste different, but that could just be a psychological thing; I have yet to conduct a proper double-blind test.

Legendary Los Angeles TV presenter Huell Howser, who did a series of shows focusing on the history and people of California, did a few shows on Galco’s. His last one is available on YouTube.

A couple of years ago, I got a four-pack of a beverage called “Green River” for my birthday. I used to drink this stuff a lot when I was a kid in Chicago, and often reminisced about it.

But I tell ya, I could not get through the second bottle. It was dreadful, like drinking artificial lemonade flavored Karo syrup. Shoulda stuck with the memories!

So I have noticed in the small independant variety shops around downtown… they are carrying the small plastic bottles of Cherry Coke Zero. But the bottle is in ounces and has no french on it… and its not one store, its a lot of them. Someone had noticed a lack in the market and is filling it with Cherry Coke Zero! And I for one applaud their cross border shopping efforts!

@lolipop_jones - heh, some things are better left in memories.

Also they have these, that I did not buy, but I really really wanted to… for reasons.

What a pretty looking selection of… HURRRF.
I do admit to trying the Maple Syrup soda, which I’ve seen around Vermont, and it’s not bad. Ranch… I’ll let you be the guinea pig.[quote=“lolipop_jones, post:13, topic:78940”]
It was dreadful, like drinking artificial lemonade flavored Karo syrup.
[/quote]

Years ago I was in London and saw bottles of Still Tango, which was nothing more than bottles of the ultra-candy-sweet fruit-flavored syrup used for Tango but without the carbonation. It was thick and tasted like I was drinking pure HFCS, which it probably was. They stopped selling it when it was discovered that it fermented on store shelves.

I should add that Coca-Cola does have its “Freestyle” machines now, which does allow one to synthesize Cherry Coke Zero alongside a million other things – but alas, I only know of one restaurant currently equipped with this device, and as you might expect it’s kind of expensive.

Coca-Cola Freestyle is a touch screen soda fountain introduced by The Coca-Cola Company in 2009. The machine features 165 different Coca-Cola drink products, as well as custom flavors. The machine allows users to select from mixtures of flavors of Coca-Cola branded products which are then individually dispensed. The machines are currently located in major Coca-Cola partners and retail locations as a part of a gradual and ongoing deployment. In 2016, Pepsi launched a competing, similar machine, th...

I don’t have a way to confirm this (Wikipedia was not helpful), but it was my understanding that the Adams brand gums would be re-released every few years. I have purchased Black Jack within the last 5 years or so. Maybe it’s due soon.

About once a year, our local pudunk grocery has boxes of stale Beemans and Black Jack (and Clove) at the checkout. I don’t know if someone has a stock in a back room, but I do always get some. Even though it’s stale.

What I can’t find, though, are non-stale circus peanuts. They are lovely when fresh:

My parents ran a fast food restaurant until I was 18. We carried Green River syrup to mix in-house. I never really cared for it, but I always liked the fact that we had it.