If there are any Republican thinkers out there, watch this video about January 6, narrated by Liz Cheney

Originally published at: If there are any Republican thinkers out there, watch this video about January 6, narrated by Liz Cheney | Boing Boing

Liz Cheney is partly responsible for the monster that now is trying to eat her. Not a hero, a victim of her own doing.

Not a hero, a victim of her own doing.

I wish some republicans or literally anyone in the media would admit this simple fact.

I will never understand this view of political original sin. She’s been as good as any Republican (and better than most) in opposing Trump as far as she could with the realistic channel markers of party politics. What she’s doing now is commendable, good for the country, good for the structure of the country, good for the party – and she’s doing it at great political risk. She could have sat back and bided her time until she became Minority Leader or Speaker in a Trumpish party. She’s doing none of that.

For a politician, that is courage.

She voted with him 93% of the time!?! 93%!!! The person replacing her had a worse record for supporting Trump!

People should not do literally all they can to enable an authoritarian, and then get to play the reasonable hero when they tell the truth just this once.

Hmm. Her narration is apparently cobbled together from appearances on news shows. You can hear the echo from the marble walls of congress.

Fair enough. But she didn’t sit down and actually make this video. And I don’t expect it to have much impact either-- some group of pariah Republicans took the words of another pariah Republican to convince . . . who exactly? We all watched what happened on Jan. 6th, what more does anyone need?

The GOP is a hopeless dangerous mess.

True enough but at this point we have an all hands on deck situation. Democracy and the Constitution need all the help we can muster, no matter who or where is providing that support.

The rest of the GOP needs to get on board to do that and they are clearly not. It is literally business as usually for almost all of them, from Moscow Mitch on down. This is even true of most of the ones who were directly targeted BY TRUMP! The GA secretary of state literally had his powers stripped away, and yet the GA GOP continues to line up to support Trump.

One grandstanding Senator isn’t going to do it. We have to vote the bastards out and ensure a deep democratic majority across the country to send a message. That’s the only way this gets fixed at the ballot box. Rewarding the VERY PEOPLE who made this shit possible in the first place does us no good.

Liz Cheyney is persona non grata in her own party.

She is politically useless to us. And a bad ally to boot.

True enough but at this point we have an all hands on deck situation. Democracy and the Constitution need all the help we can muster, no matter who or where is providing that support.

Sure, if she (or W, or Romney, or Steele, or…) were actually open, honest and penitent about how they created the situation, I’d take them into the tent with open arms.
Otherwise it just sounds like “The profiteering isn’t benefiting me as much as it used to, and I miss that.”

Or, you care about the preservation of democratic systems? Great, are you cosponsoring federal legislation to protect the voting rights that states are eroding? Cause we could actually use that.

Cheney is no hero. That term implies a level of selflessness that she, like the rest of her rotten family, doesn’t possess. If she’s operating on principle, it’s that of preserving the larger traditional duopoly system that continues to benefit war profiteers and the ultra-wealthy.

She also shouldn’t be seen as an ally for the Democratic party, but I doubt she has much interest in trying to push the Dems further rightward (especially when the Dem establishment is already doing the lifting there).

She and other “accountability Republicans”* are now stuck with trying to Dr-Frankenstein the heck out of this situation if they want to hold onto power. The GOP is so far gone into death-cult territory that their chances of regaining control of the the right are about as good as those of German plutocrat conservatives in 1933.

[* there’s an oxymoron, emphasis on the last two syllables]

If 45 had won reelection in 2020, by fair means or foul, does anyone believe that Cheney would not have been among his cheerleaders?

“Surely THIS time the Lincoln Project Republicans for Accountability will set the ship right!”

This is the equivalent of political greenwashing. Give people just enough deniability to keep voting R while thinking “Well, at least I’m not a Trumper!”

Sometimes, when the situation is desperate enough, you march alongside your opponents. But you watch them, you don’t forget who they are or imagine they are friends now. The Republicans are just slightly too fascist for Cheney’s taste right now, that doesn’t mean she supports democracy and the constitution in general.

We are the party of Lincoln

Uh, no. The republican party has totally changed since Lincoln was part of the party.

If there are any Republican thinkers out there

I saw someone’s analysis recently that made sense - she doesn’t see it as a risk. At least, not in the long term - she talks about her position only causing her short term problems. She’s counting on Trumpism being discredited and falling apart, and then she’ll be positioned as one of the the few Republicans fully able to take advantage of that, having caused her fellow Republicans to publicly tie their fortunes to Trump’s in attacking her. She may be wrong here, but it’s calculated self-interest.

If there are any Republican thinkers out there

For a politician, that is courage.

The kkkpublican/Qnut will hire anyone for a cheerleader, apply today, why wait?

I strongly beg to differ on this point. Here, she got it wrong because the Qpublicans are already there. 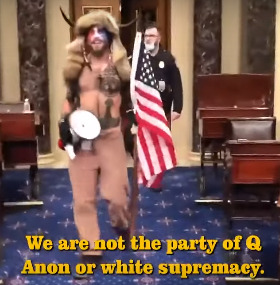