If you like 11Foot8 bridge, you'll love 10Foot6 bridge

people are dumb, obvs, so why have they not accommodated what is obviously a societal condition?

Can a civil engineer or whomever tell me if lowering the roadway would be that challenging?

While it doesn’t surprise me the truck drivers forget they are driving something that tall, it does amaze me none of the cars following them even seem to think about the tall truck through the low bridge coming up…

I noticed most of the cars were following way too closely…they deserve whatever collateral damage they received.

Tailgaters piss me off!

Can we give a shout out to the people who built this bridge? That thing is (literally) bomb-proof! Crumbling infrastructure my ass. USA! USA! USA!

That curb offset that throws inattentive drivers into oncoming traffic is just gravy in this shitshow.

Can a civil engineer or whomever tell me if lowering the roadway would be that challenging?

Not a civil engineer, but I understand it depends a lot on what’s underneath. If it’s regular ground it’s not a problem. If there are buried high-voltage cables, or a high water table, or whatever, it gets quite expensive quite fast. They’re trying to increase clearance in a bunch of rail bridges and tunnels in the UK so they can electrify, and there are some places where simply lowering the track turns out to be really expensive.

A stop sign right at the bridge could reduce the speed of inevitable collisions.

Safety aside, that’s freakin’ awesome in its own right!

Telegraph Road is closed between Del. 4 and St. James Church Road in Stanton due to a truck being stuck under the bridge. No further details were

That carries two-way simultaneous 30mph traffic, although sometimes I can see people literally screaming in terror when I’m inside the underpass. It’ll fit two standard size sedans with four inches or so of clearance in the middle and both sides.

My Prius got rear-ended here when I had to panic-stop inside the tunnel, because a guy stepped out into the road at the other end. The car behind me pushed me to about two inches from the pedestrian’s knees.

Here’s my local favorite, also built 1920 in the same fashion but recently upgraded to include a pedestrian path and pumps to drain the four feet of water that used to fill it during rainstorms. It has 8’7" of clearance and has decapitated thousands of vehicles. 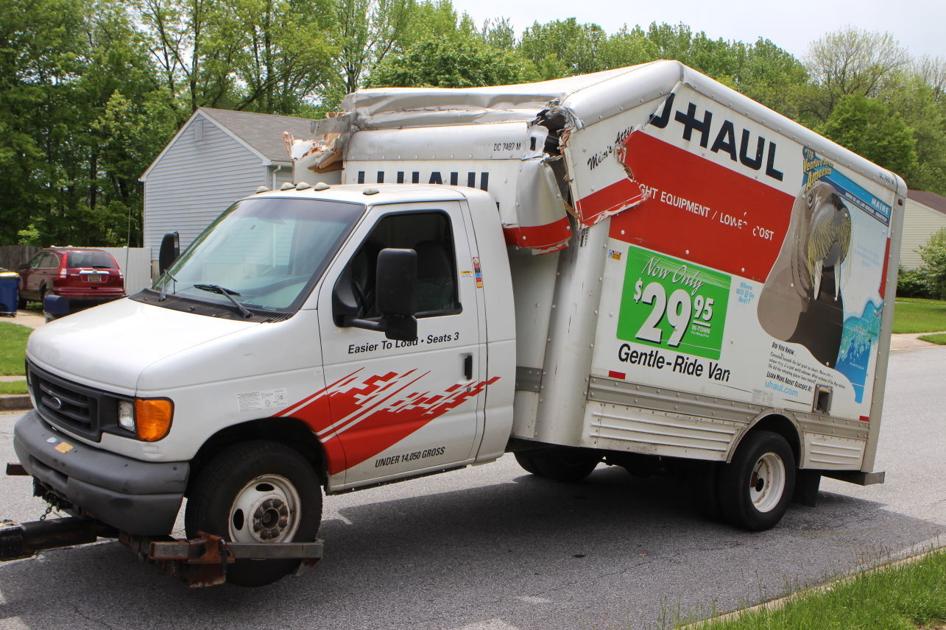 A U-Haul truck slammed into the Casho Mill Road railroad bridge Saturday afternoon, injuring six people, including four who were riding unrestrained in the bed of the truck.

There are several others in the area. I like them, although I understand they are dangerous, because the people that hit them were always going to hit something and I’d prefer that they hit something that can take the blow.

My favorite says “I’m not in your hurry”.

Sometimes you have to resort to reckless operation of a vehicle and public endangerment to make truly good food.

That’s how anchovies ended up on pizzas.

Given that trucks run into this (despite the warnings), I can’t help thinking it’d be worth it to hang a guide wire on either side – lower than the bridge by 6 inches, and several seconds of travel out – which if tripped will sound an earsplitting alarm.

Likewise, raising the railroad right of way will be even more expensive, as that would require altering the tracks for quite a distance to ensure a the grade (slope) changes are small. That’s talking $2-3 million or more per km of track, for who knows what distance either side of the overpass, and that’s before we figure out the cost to demolish and rebuild the bridge and reroute rail traffic during the construction, and ignoring the possibility of other bridge or grade crossings within the area that would need also altered as a result.

Yeah, this is why I felt lowering the roadway would be the correct approach.

Then you’ll get drivers speeding just so they trigger it.

Let the sky be blackened with lawyers!

Or if tripped, that big holographic waterfall stop sign! The city must make at least some money on YouTube bridge video ad clicks?! But back to the video, that fire certainly taught the bridge a lesson! Hey, a waterfall stop sign might even put out a fire!

I felt lowering the roadway would be the correct approach.

We did that on a couple of ours. You can tell which ones whenever it rains.

I think the best solution I’ve seen is still the hanging “crash beam” method, really. You can’t possibly save unsafe drivers from themselves, so saving the infrastructure and passersby from unsafe drivers seems like a better expenditure of limited public monies.

I mean, people hit trees and telephone poles on my road all the time. On clear, sunny days with no traffic… and I’ve had people drive right into my garden, including one fool who drove over my buried propane tank and sheared its top cover off with his oil pan. The USA gives driver’s licenses to people who are patently unable to drive safely, people who can’t manage to avoid completely stationary objects that have existed for decades or centuries. Addressing this by making the bad drivers safer seems like asking for even more mayhem!

The only one reason to show up without full gear on: if you are already on the road from another call that did not require gear. Can’t be helped but for better PR you can pull over as soon as the call comes in and put on your gear, then proceed to the fire. We roll up and I’ll have that pre-connect pulled and stretched about as fast as the driver can get water flowing. 30 seconds? And the fire truck that hits the bridge… I can only hope they were from out of district and don’t have any low bridges in their area.