I'm glad I don't have to think what to say soon!

So Google have a new messaging app - ‘Allo’ 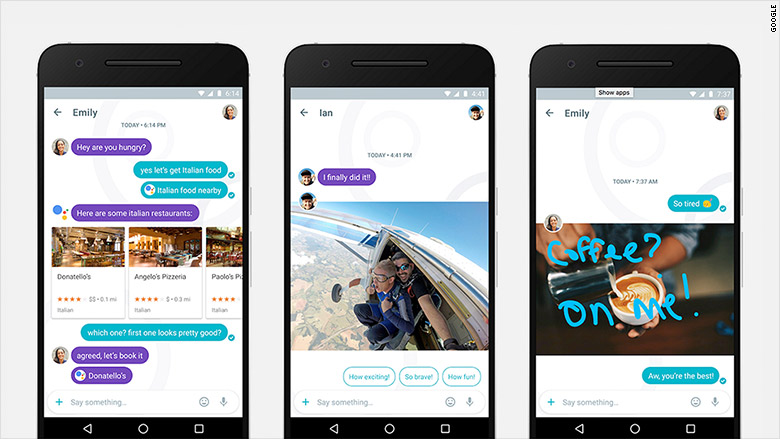 Google is calling Allo a “smart messaging app” because it learns from your conversations and suggests things for you to say.

That sounds like a great idea. No-one has to think about anything ever again!

suggests things for you to say

Will it suggest products and services for me to recommend to my friends?

Yes! It’s already in the adcopy! Truly google is making all of our lives better with amazing new products that we’ve already bought once, and don’t need ever again.

Really they’re grasping at straws for an adblock killer.

You do realize predictive keyboards like SwiftKey already do this right? Just slower. And less focused on trying to sell you shit. But it’s basically the same type of thing. Just more invasive.

I’d like actually use a toned-down version of this. Something that tells me how a “normal” person would respond would be really useful. I mostly fail at social small-talk.

While I understand all of your criticisms, this is a good thing. Now Google can automate your small talk, help you chat up a hot date, and even tell your teenagers “no” for you. Google has a range of services that already assist you in your daily life and help you make decisions, why not one more?

-Sent from my Android device. Now with Allo!

What’s hilarious is: isn’t this kind of what we always wanted out of a personal assistant AI? And we all rejected stuff like microsoft bob.

I think Google knows that this is for those people in your life who always leave redundant or empty messages (‘Hey, give me a call when you can’). With this, at least you ca—

isn’t this kind of what we always wanted out of a personal assistant AI?

This is a robot who talks for you, too people who also are probably robots. Stop the oppression, let the robots talk to each other in their native language

I’d like actually use a toned-down version of this. Something that tells me how a “normal” person would respond would be really useful.

That would get me into a lot of trouble, since I bear little resemblance to a normal person!

I mostly fail at social small-talk.

Maybe. Could it simply be that you don’t need small talk? People seem to use it to reduce perceived emotional risks at the expense of communication depth. But how about for people who are more interested in communicating actual information and aren’t hung up on feeling a certain way?

Check out the new Smalltalk80 and Prolog dresses at our online store!

Would this story be coming to us from money.cnn.com otherwise?

Just as likely: The chat robot says something derogatory in your name and you get sued for it.

How about adding a chatbot, so I don’t have to speak at all. It can use Markov chains to build sentences based on what we (I & it) have already said, so the conversation just gets weirder and weirder as time goes on.

This is so exciting.

But how about for people who are more interested in communicating actual information and aren’t hung up on feeling a certain way?

This sounds like the kind of tech that Google Inbox has already been using for a few months. I used it exactly once when the wording of one of the prompts was exactly what I was going to say anyway.

For creepiness it doesn’t compare to when a reminder about a doctor appointment (which I had programmed) popped up on my phone, and it proceeded to ask me who my doctor is. Uh-uh Goog, you don’t get to know that.